This podcast starts Ron’s transition from being a wrestler to one of the youngest promoters of all time at the age of 26.

At this time, Ron was still in Florida but was at a crossroads. He had been in the Florida territory for 4 years which is unusual. Ron saw his popularity was declining.

His St. Louis dates have dwindled because Bill Watts had asked Sam Muschnik to use Ron less as Bill wanted Ron in Florida more.

Bill is using Ron well but as we get into the later part of 1974, it became apparent Ron’s time in the territory was coming to an end. Ron was getting booked in Fort Myers which was not a good sign for Ron’s future. This was a step down from working in Tampa.

Ron thought about territories he may want to work for such as the Carolinas working for Jim Crockett Sr. or Nashville as Ron had never worked there in his whole career even though his family had. He also thought about Kansas, Amarillo, Georgia or the Gulf Coast territory.

Ron had made a great name for himself in his first 4 years and had a lot of opportunity compared to other wrestlers in his same situation.

At this point, Ron knew wrestling was what he wanted to do for the rest of his life but the question was where. He realized he needed a change but wasn’t thinking about being a promoter.

On September 10th, Ron worked Tampa but noticed he was not on TV nor was he booked until 5 days after so he decided to take a 4 day holiday and spend some time with his family.

They went to the Smoky Mountains near Knoxville and he fell in love with the area. During this trip, Ron was doing a lot of thinking about his future and the future of his family.

The day before he would fly back to Florida, Ron caught a local wrestling show. He was not impressed.

The show was called The Wild World of Wrestling. It was on a UHF station in Knoxville. The owner of the company was a former wrestler named John Cazan.

The show was all over the place, disorganized and the wrestling wasn’t that good. Worst of all, the commentator was bad especially compared to Gordon Solie. Overall, it was a lesser quality show than Ron was used to seeing from Florida.

Jim Hess was the commentator of the show and Ron feels that he always wanted to be a wrestler and the star of the show. He was ruining the product which was bad already.

While watching the show, Ron started thinking about how he he could make this TV product better and what would it take to buy the promoter out.

His mindset had changed from being a wrestler to what if he could live in this beautiful place, own his own company and be home with his family every night.

The next morning, Ron was leaving Knoxville but wanted to find out who was running Knoxville. When he got home, he talked to his brother Rob and Jimmy Golden about wrestling in Tennessee.

He was able to get in touch with John Casana and set up a meeting the next week.

John Casana was from Greece and was trained by Jim Londos. He also teamed with George Zaharias.

George Zaharias was known as ‘The Crying Greek from Cripple Creek’. George’s wife Mildred ‘Babe’ Zaharias was more known than George and she is regarded was one of the greatest athletes of all time.

John Casana took the company over his brother George but was getting tired and was interested in selling.

Next week, Ron continues his journey to becoming a promoter.

Review: Even thought Ron didn’t talk about wrestling, this was an interesting podcast. A lot of podcasts tend to be about wrestlers and what they go through. This is different because it’s about a wrestler who transitioned into a successful promoter which is unique viewpoint. People like J.R and Austin have talked about promoters on their podcasts or have interviewed a promoter but this is a wrestler turned promoter who actually has a podcast. I’m really looking forward to hearing the rest of this story. Definite recommend. Rating: 7.5/10

RECAP AND REVIEW: The Jim Ross Report – Kevin Kelly on the NJPW wrestler who is like Tom Brady, the tag team members he’d always confuse with each other, Bill Watts on the shoot fight between The Barbarian and John Nord, why he wouldn’t let wrestlers play cards before matches, why Bill yelled at J.R. over a jobber 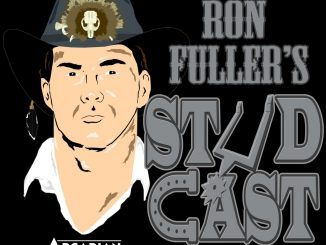 RECAP AND REVIEW: Ron Fuller’s Studcast on the beginning of 1974, wrestling Harley Race and why he’s the greatest wrestler who ever lived, how the NWA could have been more successful, matches with Mr. Wrestling 2 and Blackjack Lanza