33:36 – What’s next for Dolph Ziggler, The sudden change of The New Day, Rusev, Kane and Undertaker at WM.

0:00 – 3:25 – James opened the show by briefly talking about the key segments on Raw, and the matches that were announced tonight for Hell in a Cell.

3:25 – Pat joined the show, and asked if anyone actually believes that Kane will be fired if he loses at HIAC. They both talked about Kane, Rollins, and The Authority, and the inconsistencies of this whole storyline. James talked about the ambiguity of The Authority. They talked about match placement at HIAC, with Brock vs. Taker obviously in the main event, with Kane challenging Seth in a filler title match. Pat said that even though that’s the case, it’s being presented on Raw as the primary storyline feud.

10:09 – They talked about Paul Heyman’s promo at the start of Raw. James said regardless of the fans’s love for Brock and Heyman, they don’t want to hear anything negative about Undertaker. Pat said WWE doesn’t even need to promote the match with segments and promos, as it pretty much sells itself. Alternatively, there’a always the draw of what Undertaker will look like every time he returns, and a promo by Taker over the course of the next few weeks would pique most people’s interest.

12:36 – Pat said WWE doesn’t have the convenience and luxury of showing, on Raw, Undertaker and Brock’s first HIAC match from 2002 because it was a bloodbath. James mentioned that, ironically enough, today marks the 18th anniversary or both the inaugural Hell in a Cell match, and the debut of Kane. They talked about how HIAC isn’t the same draw as it once was because of the changes it’s gone through over the years. It started out with blood and dangerous spots, and without the benefit of that, plus WWE compromising the cage with shortcut booking, it’s just not as special as it once was. Pat said everything that set it apart from other matches has stopped, and if anything, a cage match of any style should be used as the blow off to a feud.

15:30 – They addressed the problems on Raw being inconsistent, and this being reflected in the low ratings. James said there’s no one on Raw that WWE positions to consistently excite the audience or deliver a good match every week, like a Daniel Bryan. Pat said that Cena and Rollins could deliver good matches if given the opportunity. Pat gave his plugs and they went to the phone lines:

21:09 – The first caller talked about really enjoying the Network special WWE 24: NXT Brooklyn. He also said that while it’s nice that WWE does charitable work with organizations like the Susan G. Komen Foundation, it should be something that’s done before Raw goes on the air, or after it goes off. He said Seth Rollins shouldn’t be in the campy storylines they put him in. He asked about Daniel Bryan being advertised initially for the WWE European Tour in November, since John Cena won’t be on it. James said he’s not sure about the advertisements, and no one seems sure about the legitimate health status of Daniel Bryan. He said that now without Cena, they really have to come up with something. He agreed that Seth is being mis-used, but obviously someone in charge likes this program with Kane. James said the breast cancer segment further exposed Roman Reigns’s poor communication skills, especially while in the ring with Cena. He mentioned C.M. Punk tweeted about Komen being a sham. James said this was another example of WWE Corporate collectively patting themselves on the back.

28:23 – The next caller pointed out that in Cesaro’s absence, they gave the “Cesaro Section” to John Cena. He also praised Sasha Banks. James joked that they had to give the section to Cena, since Boston is his hometown. He agreed that Sasha is really a stand-out star in the division. He wondered aloud what the long-term plans are for her.

33:36 – The next caller asked about what’s next for Dolph Ziggler. James said he’s been kinda lost in the shuffle, one minute in a Soap Opera with Summer, Rusev, and Lana, then he did a spot on Total Divas expressing his interest in Nikki Bella, and now tonight on Raw getting a beat down from The New Day after inadvertently kicking Cena. James talked about the curious booking of New Day, as tonight they abused the Dudeys, Cena, and Ziggler (twice) which is in sharp contrast to how they’ve been presented up to this point. He thinks Ziggler will ultimately be in a feud with Rusev over the U.S. Title. Caller predicted Taker vs. Kane at WM 32. James said it’s either that match or Taker vs. Cena, as the only real possibilities at this point.

40:39 – Next caller continued the conversation of Undertaker’s opponent at WM32. He asked James’s opinion of TNA Bound For Glory and the fans having access to the catering area with the wrestlers, and what will come of Dolph Ziggler’s accidental superkick to John Cena. James said it’s not a heel turn for Ziggler, but time will tell; maybe a U.S. Title match at HIAC. James said about TNA: they’ve done this in Orlando in the past, where VIP ticketholders ate in the general vicinity of the wrestlers. Not knowing the full story of what happened in North Carolina, he said some of the wrestlers haven’t been too pleased with the idea in the past, as they probably didn’t feel like being in-character or signing autographs or talking with fans when they just wanted a little down time to eat. But, he wasn’t sure why the wrestlers were even more upset in this instance. It would have had to have crossed a different line than the case in Orlando.

47:16 – Next caller said that blaming football is a poor excuse for Raw’s poor ratings, because in wrestling’s salad days, they beat football in the ratings. James said the product isn’t hot, WWE is justifying the slump externally to shareholders and USA Network. It’s an easy crutch, that’s more convenient to them. The caller said WWE’s creativity is shot. They have a very talented roster, but they’re being stifled because the company revolves around Cena. James said it will be interesting to see what direction they’ll take in his absence, and what they’ll do with him upon his return.

53:13 – Next caller said Cena’s absence won’t make a difference either way, as the problem with WWE lies within the writing. James said Cena used to be a real difference-maker in the ratings, but the last time that happened was during his program with Nexus. He said that, all told, no one there is a difference-maker, as evidenced by this past summer, where Brock, Sting, Undertaker, et al didn’t help the ratings in the least. The caller asked if Steve Austin could, along with WWE, be keeping a match at WM32 as a big secret. James said he firmly believes that Steve is being sincere, and will not be wrestling. Austin takes a lot of pride in his work, and unless he’s sure he’s 100 percent, he won’t be involved. He said it would be nice if Austin could have one final farewell match, but that likely will not happen, which is unfortunate. The caller asked if the ratings could dip lower than 2.0, and if Brock being on Raw tonight will help the ratings tonight. James said WWE didn’t promote him being on the show enough for it to have been effective. Last week’s show was so bad, it probably created a lag effect. He said if the ratings dip below 2.0, WWE would be in full panic mode. James wondered what the bottom is for their numbers.

1:05:35 – Next caller talked with James about how it was just out of nowhere that New Day became a dominant force, when up until this point, they were just a comedy act. The caller asked how they’re going to write John Cena off TV. He suggested that it might involve Ziggler or Rusev, but it could go a number of ways at this point.

1:11:07 – The next caller aired his grievances about Raw, pretty much echoing the sentiments of every other caller thus far, and James himself. He asked: “Why do I keep doing this to myself? Why do I keep watching?”  The caller asked why it seems like practically every year around this time, WWE books Kane and Big Show in top angles, storylines, and matches. James said it can all be attributed to WWE still favoring the big guys, and that’s we have a guy like Braun Strowman. James said wrestling fans keep watching for the hope that something will turn it around. Wrestling fans will almost always watch wrestling. The caller moved on to the fact that New Day can’t be taken seriously. James said it would be nice if they are turning a page, but there needs to be more thought put into the turn, otherwise it’s just too random.

1:22:23 – Next caller said you have to look at Raw as though you have split personality disorder. James laughed, and said you almost have to watch it every week, by forgetting what you watched last week, because there is no continuity. He said McMahon crafts these shows from the mindset of a promoter, presenting a one-night extravaganza each week, and not an episodic wrestling series, which is what they really are trying to be, and that’s why it’s of poor quality.

1:29:24 – Next caller brought a different perspective to the New Day story. He said he had heard that originally, they were supposed to be almost like Nation of Domination 2.0, but this was around the time of Ferguson, so they turned into a comedy act, due to the sensitive nature of current events. James wondered what the long-term direction of the team is going to be, since this was the first time they came across as main event heels. He said the way things are in WWE, if they do build momentum as serious heels, WWE will probably go away from it one week, and they’ll be back to dancing and singing.

1:32:41 – Next caller asked where they go next with Bray and Roman after HIAC. James said it’s always easy to give someone to Bray to torment and psychologically torture, but Roman is a different case. He said there are a few options, (e.g. they might turn either Ambrose or Orton to do some things with Roman) but at this point, it’s entirely speculative. Another case of the long-term direction not being very obvious right now. The caller asked how WWE expects to maintain the integrity of the belts, when they seemingly do everything contrary to that. James said the only way for that to happen is to make title matches a focal point, with logical, consistent booking, with clear, decisive outcomes. He said it takes time to build, but doesn’t know if the commitment is there.

1:40:04 – James went to the mailbag, and answered a few e-mails, which were quite similar to other topics covered tonight, and in recent shows. Topics included, New Day and Seth Rollins being taken seriously, will John Cena drop the U.S. Title prior to taking time off, (Rusev and Dolph being the top names to win it), DVR numbers for Raw, which have gone down substantially in recent weeks and continues to erode. What’s next for Paige? (Poor booking for the Divas Division, with too many to get over at once.) 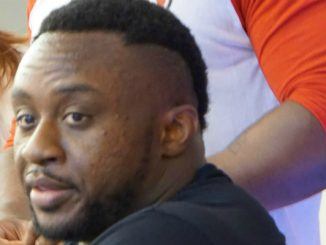 QUICK QUOTES: Big E on the merchandising power of New Day, turning heel on Twitter in 2015, chemistry with The Usos

Written Podcast Recap: The Jim Ross Report – Why ‘Backlash’ fell short, ‘The King’ calls in, greatest blooper J.R. has seen, and an NJPW Superstar Takes Home ‘Slobberknocker of The Week’