-Roberts talks about his time dealing with bullying from Triple H, Kevin Dunn, and mainly JBL, and how WWE management knew this was going on.

-Roberts said he worked hard getting his book written, and getting it published was also hard because a lot of publishers had contacts with WWE.

-He compares and contrasts the bullying of himself and the Be A Star Campaign, and how it is a negative aspect within the WWE.

-Making the WrestleMania 30 call after the Undertaker’s match was the most awkward call he ever made.

-If Roberts had a choice between Kevin Dunn or Triple H as a boss for the next 20 years, he said he “would quit.”

– Roberts claims Vince is “out of touch with the audience.”

4:00-13:00
Justin Roberts joins the show. They start to go over Roberts’ new book, and this past week with JBL at Smackdown in Boston. Roberts says JBL made his life hell during 2003. He talks about the good times with Tommy Dreamer in later years in his book. He continues talking about the bullying mentality in the WWE, and that it starts with the people above JBL in the company. He touches on Mauro Ranallo and how he respects his work. He never met him though. Wade brings up frat and sorority hazing and tried doing a comparison to that and Roberts said “no”, it went beyond that to having either Vince, Triple H, or Kevin Dunn in certain people’s ear telling them what to say. Wade brings up the expansion of social media with Jerry Lawler’s podcast more or less backing up JBL, with other wrestlers coming to JBL’s aid too. Roberts understands taking up for his brothers as The King tried to do, but Roberts states the bullying was after guys like himself and Joey Styles.

16:00-35:00
They continue on with the interview about Roberts’ book, and talk about the main issue with JBL in the early 2000s between the two. Says different people have come to him privately expressing respect for him standing up for this issue, but not publicly due to them maybe wanting another run with WWE. Roberts starts talking about his book and certain issues with JBL, Jamie Noble, Chris Benoit and Vince. He said management knew about these situations. He also talks about his good times within the company. Just a lot of people are wanting to know more about the bullying than the good times. Says that Fit Finlay came to him and told him to not give up, giving him props. Roberts states that the bullying or hazing he went through probably isn’t like that now within the company. He did say getting an agent and a publisher for the book itself was hard due to several publishers being connected somehow to the WWE. He finally did and broke through. Wade recapped the book was filled with a lot of good times and good people within the WWE.

39:00-53:30
Went to callers after the break. Caller brought up Roberts’ book and how he used to book for Verne Gagne and AWA. Caller asked about putting his foot down about the bullying and if he still has the passion for creative. Roberts brings up talking with the great minds in WWE, and still wants to, as he has a passion for the business. Next caller is up and talks about Sam Roberts talking about JBL, as well as the hazing within the business. Roberts jumps in and says Sam Roberts might be giving the company’s line but is not there going through it. Roberts says that if WWE does anything to JBL it will be laughable since he’s been there for so long. Roberts brings up the Be A Star campaign but they have bullying going on inside the company. He knocks the high-management against the campaign, versus the people going to the schools, who he says are good people.

57:30-1:06:30
They start talking more about his book and staying professional about his release from the WWE. He knew it was coming and he wanted to go out of his way to tell all, but he went against it and stayed professional. Roberts starts talking again about Be A Star Campaign from bullying in the programming versus actual bullying, and how it plays out as a negative to the company. Another caller comes on and says a lot of talent come in and are great to work with and go forward and do good deeds for fans including the kids.

1:09:00-1:29:00
Emailer asked about Roberts getting in touch with AWA and NWA within the Chicago area where he grew up. His book goes into more detail with the AWA/WWE lawsuit during the time period that he worked that area. Another emailer wanted to know how Roberts felt to call The Undertaker’s streak ending at WrestleMania 30. Roberts gives a detailed breakdown in his book, he goes forward and says that having to make the announcement that Brock Lesner won was very awkward in itself, as he himself didn’t know what to expect and thought the referee actually made a mistake in counting to three. He goes forward and says no other announcement he made got that type of reaction that match got in the end.

Wade moves on to talk about Kevin Dunn and Triple H as bosses, as they are still within the company. Roberts says that “they are the boss and what they say goes” with no questions asked and having a bunch of “yes men” telling them how great they are. Roberts wanted to ask questions to do his job right, and he felt they were treating him like anyone could do his job by telling a story about Kevin Dunn blowing him off and making fun of Roberts to everyone in the production truck. He talks about his book more and signings these days. Wade brings up life after the WWE and Roberts’ future. Roberts talked about being on autopilot while in the WWE, and how he was going all the time and now he is home in Arizona around his family with him spending a lot of time writing his book recently and now doing voiceover work at his studio inside his house. He also goes on to say he does wrestling conventions and announcing for CBS boxing.

1:32:00-1:47:30
An emailer brings up JBL/Mauro situation again, and how morally it conflicts with the business within the company as the WWE is on top of the industry. Roberts says it’s hard now since no one will speak up against those in charge. They talked about if Shane McMahon was in charge rather than Stephanie McMahon, Triple H, Kevin Dunn and Vince. Roberts said he never saw Shane as the bullying type, and he would be open to him running the company if it ever happens. They start talking about WrestleMania 26 in Phoenix and how Roberts requested three tickets for his family in his hometown. He did say in his book that he never got paid more for doing WrestleMania like talent did from the gate and pay-per-view buyrate. Kevin Dunn told Roberts “that he should know better” than to request those tickets for his family, as every other talent had friends and family there. He did wind up getting tickets for his family. Wade asked Roberts if he had the choice to choose to work for Kevin Dunn or Triple H for the next 20 years which one would he choose. Roberts said “he would quit.”

They start to end the conversation with Vince McMahon. Roberts says he would try to avoid Vince as much as possible and that Vince had his moods during times. Roberts goes forward saying how Vince hasn’t changed much while he was there as he micromanages, but does give off some duties to Triple H, and Roberts feels that Vince “is out of date with his audience.” They promote the book more before they end the interview.

My Analysis:
Being a fan of the business and watching the WWE since I was a kid, I felt this interview peeled back the curtain on certain things that I kind of knew was there within the company but didn’t have solid evidence of. Having Justin Roberts say all he said shows that and how you have to deal with people in certain situations. That being said, I can understand his viewpoint as I was bullied as a kid and now as an adult, I stand up for the Roberts types. I found it very interesting how he felt calling the announcement of WrestleMania 30 in the Undertaker’s match from his viewpoint. Hearing him talk about Triple H/Kevin Dunn and Vince was also interesting. I kinda figured Dunn has been an a-hole to certain people, but being a fan of Triple H myself, and him having three daughters, I would hope he sees things differently now than when Roberts worked for him. Do you think Triple H remembers the hell Vince put him through for “The Curtain Call?” Hearing Roberts say that Vince is “out of touch with today’s audience” surprises no one. Overall, a good interview and a good internal look inside the WWE.

About The Author:
I am 37-years old-and was born in Biloxi, MS and raised in New Orleans, LA. Long time wrestling fan along with football and NASCAR. Yes, I am a Cajun Redneck. I grew up as an ’80s hairband fan and the only rap song I fully know is Vanilla Ice’s, “Ice Ice Baby.” I finished school at Auburn University with a Business Administration/Journalism degree. I am prior service with Army National Guard. 91X, mental health specialist. Have also had experience within the wrestling business with William Moody’s (Paul Bearer) promotion in south Alabama. Forrest Gump country… Did many things from putting up the ring, taking bumps, conditioning talent, sitting in on production meetings and running the pay gate at his shows. My other craft is being a personal trainer and nutritionist for well over 13+ years. I enjoy spending time with my family, friends, beautiful women and my Yorkie child named Max. 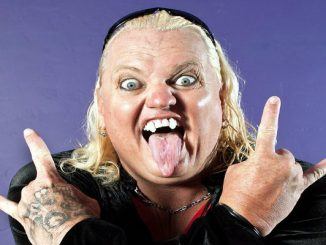 WRITTEN PODCAST RECAP: What Happened When with Tony Schiavone on Bash At The Beach ’94, Hulk Hogan’s arrival, why Jesse Ventura was fired (Episode 13)