Card was held February 21st, 1993
Eric says during this time period, a lot of things were happening from a management, philosophical and booking point of view that Eric wasn’t involved in. When he was first hired, it was as an announcer and he tried to stay away from the politics. He only started paying attention to the politics during the time of Bill Watts’ run in the company.

Although he wasn’t absolutely sure, he was pretty confident he was the executive producer for this show, but stresses he was not involved in anything creative, the in-ring action or talent acquisition.

One of the big stories happening was the return of Ric Flair from the WWE. Eric didn’t know what the mood was in the locker room about it because he didn’t know very many of the wrestlers. Many of the management team who had been part of the old NWA were excited that Ric was coming back but not everyone on the wrestling operations side felt the same. Some of this was jealousy, some of it was frustration and some of it was fear about how much power Ric might have. Eric was excited Ric was coming back.

Ole Anderson replaced Watts after Watts left but that didn’t affect Eric. There was a moment in time where Eric and Ole were friends however, as Eric got more control of the company, they started clashing.

Business in the WCW (and WWE) was way down in 1993. Prior to becoming executive producer, Eric had a general sense of how things were going but when he got the position, he became very familiar with revenues and what was down.

Eric felt WCW was in a do or die phase and knew exactly where the company stood from a financial perspective. Bill Shaw told the staff Ted Turner was important but this was their last shot.

Ron Simmons had some issues and no-showed an event which put him in the doghouse with Bill Watts. Eric wasn’t involved in any of this and at this point and was making plans to leave the company as he had lost his passion for this. Additionally, the atmosphere in the company was not great due to Bill Watts.

WCW started talking to Terry Funk and offered him a deal but he decided not to come to WCW. Eric clarifies that Terry wanted a hand in creative which was the tipping point as to whether or not he was coming to WCW. (Eric admits he didn’t hear this first hand).

Eric did not make the trip to the Tokyo Dome show as it was before he became executive producer
Back then, Eric didn’t have an opinion either way about having two world title belts but today, he doesn’t like the idea of two belts especially if you can’t explain why people should care about this.

Paul Orndorff starts replacing Rick Rude on house show loops due to injury and as a result, Rude is stripped of the U.S. title. His reign was 14 months which is the 2nd longest U.S. title reign.

Rude had a Lloyd’s of London insurance policy. A bunch of wrestlers were scamming it but also found that if you were to go back to wrestling, you’d have to cut a cheque and pay the money back.

There was a rumor that Rude wanted to work babyface but Eric never had a conversation with Rick about it.

Dustin Rhodes won a tournament to become the US champ beating Ricky Steamboat. Barry Windham hit a DDT on Ricky on the floor for Dustin to get the win.

Eric says this wasn’t a stand out event and not a lot of thought was put into this card.

Davey Boy Smith was rumored to debut on this Clash but he ends up making his debut in SuperBrawl III. There was rumor that Davey had a separate deal for European tours but Eric isn’t sure if he did or not.

Madusa left the company at around this time. Eric said she was frustrated as there were not a lot of women for her to work with in the WCW. They didn’t have the talent or resources to build a women’s division.

Cactus Jack turned face. Eric didn’t like Jack as a heel and thought he was a better face. He also was one of the nicest guys in the business and being a babyface was more consistent with who Jack was in real life.

Magnum TA was one of Dusty’s right hand men. Eric thinks he was released most likely due to cost cutting.

Paul Heyman’s was fired by fax due to some allegedly falsified hotel expense reports. Paul was a TBS employee and was able to get his expenses covered by the company.

Erik Watts was not over with the fans at all. Eric felt sorry for Erik and says history is unkind to second generation wrestlers. Watts was a smart, athletic and level headed kid who tried hard but the fact he was Bill Watts’ son was working against him. His match at SuperBrawl III was horrible.

Sid got released from the WWE and was slated to come back to the WCW. Eric was aware of it but didn’t have a strong feeling about it one way or the other because he didn’t know Sid

An audit company called Booz Allen was called in to go through all of WCW’s business practices to get a clear picture of the operations as a whole.

Meltzer reported Hogan had a meeting at CNN Centre regarding some movie deals. Eric said there was no buzz about Hogan potentially working with WCW at that time.

Andre The Giant’s last appearance on TV in America was Clash Of Champions 20. Eric got a chance to meet Andre briefly.

WCW conducted their first steroid test in February 1993. None of the boys discussed this and especially with Eric. At the time, Eric didn’t care as there was nothing he could do about it.

A number of the talent contracts were coming to an end and Bill Watts tried to cut these contracts which pissed a lot of people off. Eric spoke to a few talent about this and noticed how miserable the atmosphere was due to Watts’ management

A Shakeup At WCW

Meltzer reported on February 2nd there was major bloodletting resulting in changes in the corporate hierarchy. Bill Watts and Jim Ross lost a lot of power. The company was divided into three categories, PPV, TV and wrestling product. Jim Ross took the biggest fall of anyone. He was removed from all TBS shows and was no longer be part of the announce team. Eric doesn’t know where Dave got his info. The company was ultimately split into two divisions, television and everything else.

Ultimately, Eric was named executive producer and says this was an exciting time in his life. He felt like he had nothing to lose and everything to gain.

Bill Watts did an interview with homophobic statements, racist terms and advocating discrimination. This was brought to the attention Hank Aaron. Eric didn’t hear about this until 1993 and was ultimately the straw that broke the camel’s back.

Eric recalls a story of a meeting that happened where Watts urinated off the balcony of the meeting room onto the street.

Bill would also let everyone know he was carrying a gun to intimidate people.

Eric felt Bill was a bully and insecure. Physically he may be intimidating but mentally he was a weak person.

Show sold out however this was the third lowest PPV event

Eric and Missy Hyatt kicked off the show.

Eric says they lacked focus and energy. He also admits to not doing a good job during this point. He didn’t vary or change levels and as a result, people would tune out.

Eric said Missy was mostly a character and not there to drive story.

Jesse Ventura made a comment that the fans were booing Watts which Tony Schiavone tried to cover up.

Eric felt Jesse’s announcing was good here aside from that comment. He says during this period, Jesse’s relationship with the WCW was in a good place but deteriorated over time.

After the match, they make an announcement that Ric Flair is at the venue. They cut to his arrival to the building

2 Cold Scorpio beat Chris Benoit
Eric says this was an interesting match
During this time, there was heat between WCW and NJPW because of Bill Watts
At the time Benoit was still working with New Japan and this was one of the first times Eric was exposed to Benoit

Cactus Jack beats Paul Orndorff in a falls count anywhere match
Match started hot with Jack attacking Orndorff
Even though Eric’s not a huge fan of these types of matches, he was a fan of this match.
Paul was still on top of his game

Rock and Roll Express beat the Heavenly Bodies
Eric became a fan of this match and says it was two teams doing tag team wrestling whereas today you don’t see team work.
That said, Eric wasn’t a fan of the ending of this match.

Dustin Rhodes beats Maxx Payne via DQ
Eric said this match was a miss from the get go. Maxx’s character didn’t make sense plus Eric isn’t a fan of no finishes.

Barry Windham beat Great Muta for the NWA Title
At the end of the match, Flair came out and put the belt on Windham
Eric said the match had a lot of potential but neither Windham or Muta was able to adapt to each others styles. Match was mediocre and there was no chemistry

Vader defeated Sting in a White Castle Of Fear strap match
Eric says Vader was awesome and they may have been one of his best performances. His workrate was amazing. Sting’s selling was good as well
The mini-movie filmed for this match was horrible and was filmed by Sharon Sidello. Eric says she was very political and not a good person

Review: Normally, I like learning about the business side of things on 83 Weeks but I have to admit, I could not get into this one. I tapped out about an hour in and the only reason I finished the podcast was to do the recap. There was too much in this pod and it was all over the place which made it really hard to listen to. I’m not saying it’s a horrible podcast but I wouldn’t put this near the top of my playlist. Rating: 6/10

RECAP AND REVIEW: The Jim Ross Report with Nick Aldis on his upcoming match with Cody at All In, if they should go on last, Mickie James, Slobberknocker of the Week and Pet Coon Goofy Award 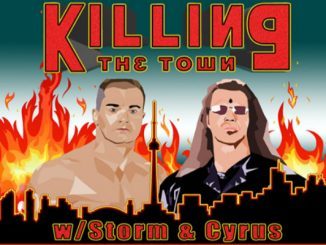