0:00 – Introduction – Colt Cabana introduced Gary Michael Cappetta by saying some people may not know who he is, but he is a well-known ring announcer, comparing him to Howard Finkel, Justin Roberts, and Lilian Garcia. Colt mentioned when he started wrestling, ring announcers were trying to impersonate Finkel, and now Justin Roberts, but Colt would do a Cappetta impression while he was traveling. Colt talked about turning down a chance to be on a reality show about finding love. Colt said that he cares more about wrestling than being famous and mentioned that those on “Tough Enough” are just trying to get famous quickly. Colt recounted a story from this weekend where he and Brian Myers (Curt Hawkins) were mistaken for fans at a Pro Wrestling Syndicate show.

13:27 – Gary Michael Cappetta Interview – Cappetta started off by declaring his appearance a “mistake” and worried he wouldn’t have anything worth saying. Cappetta talked about “walking on eggshells” early in WWF, and that he asked Vince McMahon, Sr. for a raise, which was terrifying. Cappetta talked about Gorilla Monsoon bringing him in to do ring announcing. Cappetta discussed working house shows because having the same announcer as TV made them feel more important, and despite never being mentioned on air, people recognizing him on the street after just a few weeks with WWF.

18:30 – Cappetta talks being involved with wrestlers – Cappetta talked about teaching full time, but still being on the Saturday night shows seen by his students. Cappetta said that he was a “professorial” presence in the ring, but he was also a klutz and wasn’t allowed backstage. Cappetta told a story about George “The Animal” Steele chasing him around, slamming him, and chewing his carnation boutonniere, which led to Steele chasing him around before every show. Cappetta said that Steele chased him around because, instead of asking where he was from and what he weighed, Cappetta asked Steele where he wanted him to say he was from and what he weighed, which Steele took as Cappetta calling him a fake. Cappetta said he wasn’t trying to get involved with wrestlers, he was just reacting to what they were doing to him. Cappetta briefly mentioned that Jimmy Snuka tried to take Cappetta’s pants down on TV and getting bodyslammed by Peter Maivia. Cappetta said he somehow knew not to initiate anything because he wasn’t selling a single ticket, and he was being used to put over the guys selling tickets.

25:48 – Cappetta talks getting started announcing – Cappetta said he wanted to watch wrestling, but wasn’t able to afford tickets, so he went to Ring Magazine and started writing freelance articles and going to wrestling shows with a press pass he was given. Cappetta started announcing at then-WWWF shows because he asked Willie Gilzenberg – the announcer who was very old and seemed in pain walking to the ring and back – if he could announce instead. Cappetta was later told to come back the next week in a suit and tie, and he could announce for the whole show. Cappetta went to the show with some friends, but he didn’t tell them he might be announcing, and changed into his suit in the car. Afterward, Cappetta got a call from Gorilla Monsoon to come on the road and announce, in addition to being a full-time teacher.

32:19 – Cappetta talks quitting teaching and leaving WWF – Colt asked if Cappetta was the full-time announcer, and Cappetta told him that most venues had their own ring announcer, but he still worked full-time. Cappetta worked as a teacher for 15 years while announcing, until 1989 when he went to WCW. Cappetta didn’t believe he would ever work full time for WWF, but when WCW was bought by Ted Turner, he felt he could make enough money to live. Cappetta talked about leaving WWF in 1985 because Vince, Jr. was able to get all of the ownership shares in the company. Cappetta talked about being bed-ridden with hepatitis, and realizing he was working a lot for WWWF and not making a lot of money. Cappetta circled back to a story about asking Vince, Sr. for a raise and being told no, even though he got the raise anyway. Cappetta said that he didn’t like Vince, Jr., and Vince didn’t like him either, so he felt comfortable leaving WWF.

38:14 – Cappetta talks post-WWF work and lawsuits – Colt asked what type of “indy work” was available in the ’80s. Cappetta explained that anybody that worked for WWF when it was getting big but was fired instantly became a headliner at small shows at high schools. Cappetta mentioned Sargent Slaughter as someone fired because he wanted merchandising money. Cappetta said that WWF officials had everyone sign away the rights to their image for less than a dollar so they could put out video tapes. Cappetta never signed, so when he saw his image and voice being used on tapes, he sued WWF. Cappetta said that his attorney stopped showing up for pre-trial meetings, the case was thrown out, and he found out his attorney had lied to him and was friends with people in wrestling. After that, Cappetta sued his attorney for malpractice, and he won that case. Cappetta said that he didn’t care about burning bridges because if he is seen as valuable by someone, he’ll be hired regardless.

42:27 – Cappetta talks Pro Wrestling USA – Colt asked Cappetta about working for AWA and ESPN. Cappetta talked about the show being an hour of wrestling and an hour of roller derby. Cappetta was then hired by Verne Gagne to do shows in New Jersey, while he was working with WWF, which makes him the only person ever to work for WWF, AWA, and NWA at the same time. Cappetta said he didn’t have the best voice, but fans saw him as “one of them” because of his honesty and that he got the Pro Wrestling USA job because of his connection with the fans.

47:35 – Cappetta talks announcing persona and book – Colt brought up other wrestler’s Cappetta impressions, and Cappetta began talking about making himself stand out in a “passive way.” Cappetta wore a bow tie to slyly go against the long ties worn by other ring announcers, and a carnation boutonniere to make himself recognizable. Cappetta also mentioned focusing on announcing names in a way that “felt right” and making sure to hit syllables properly. Cappetta talked about writing a book after leaving WCW, which was self-published and then re-released with additional comments from wrestlers he said controversial things about.

51:40 – Cappetta talks leaving WCW – Colt asked Cappetta why he left WCW, to which Cappetta quickly replied that it was Eric Bischoff. Cappetta discussed WCW bringing Michael Buffer in to announce main events, for $6,000 a night. Cappetta then mentioned no-showing some WCW events because he wasn’t getting paid, and Bischoff wouldn’t negotiate with him. Ric Flair put in a good word for Cappetta, and he stayed in WCW for another year. Cappetta talked about his last WCW show, where he told the crowd it was his last night to try and get them to be rowdier, and management thought he was going to “piss all over the promotion” and sent security out to watch him. Cappetta said that before that, he was late to the arena and management was worried he was going to no-show, so they had prepared for him to be replaced. WCW then had an event where Michael Buffer couldn’t make it, and they called Cappetta to come in, even though they had another announcer (David Penzer), which Cappetta thought was disrespectful. Cappetta was offered $1,000, then $3,000 to come in, but because Buffer made $6,000 he said no.

1:00:40 – Cappetta talks retirement and teaching – Cappetta spent two years off, writing his book. After writing his book, Cappetta went back to teaching, and mentioned that throughout the years, he has quit three times for different reasons, but the school kept re-hiring him. At age 52, Cappetta quit his job again to promote his book because it felt right to quit his job. Colt asked if Cappetta’s attitude came from wrestling, but Cappetta said that his attitude is what got him announcing to begin with. Cappetta said he would do more writing, since he retired from teaching, and briefly talked with Colt about their time in Ring of Honor. Colt thanked Cappetta and ended the interview.

1:06:05 – Colt wraps up the show – Colt talked about Cappetta cooking him dinner when they taped the interview. Colt thanked his fans, Cappetta, and his sponsors, plugged his upcoming appearances and signed off.

1:09:27 – Bonus Clip: Cappetta impression – The show ended with an impression of Cappetta thanking the fans.

7.5: Colt mentioned early on that he got some new audio equipment, and the episode definitely sounded really good, but it was taped at Cappetta’s home. It will be interesting to see how clear the audio is once Colt starts taping shows in locker rooms. This interview was pretty interesting, as Colt and Cappetta seemed to enjoy talking to each other, and it was nice to hear from someone who was a big presence, but isn’t as remembered as some other ring announcers wrestlers from the past. Cappetta didn’t break any news, but hearing about his past and his lawsuit with WWE, as well as his time in WCW was very interesting. I wouldn’t say this episode is a must-listen, but it was a nice peek into the life of a less celebrated wrestling personality. 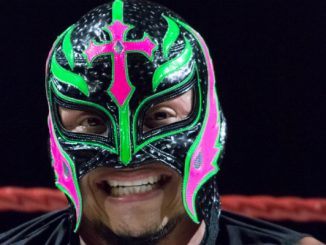 WRITTEN PODCAST RECAP: Bischoff on Wrestling – Eric relives his match with Shane McMahon, reveals why he’s not a fan of managers and oranges on his plate, making out with Linda McMahon, harsh words for Sexy Star (Ep. 58)