Heidenreich was recently interviewed by The Hannibal TV. In their latest clip, he talked about his lengthy feud with The Undertaker. Here are the highlights:

His thoughts on The Undertaker’s longevity and the injuries he’s dealt with:

“I don’t see how he still walks. Because I was in it (wrestling) 12, 13, 14 years, and from what I did to myself in football, right now at almost 48, I have serious health issues, man. I’m beat up. Somedays I can’t walk without a cane…you pay a price. Any athlete that goes professional in any sport, you’re sacrificing.”

Their casket match at Royal Rumble 2005:

“It was great. It was cool because I actually have a deep-seated, inner fear of caskets and…it comes out of something horrific that happened to me, but it was something that I drew off of and made it real. My brother was murdered when I was in high school and that’s where my fear of caskets really came from. I told Stephanie ‘I don’t know if this is too morbid or too far to go, but this is really where it comes from.'”

Being “ribbed” while in the casket:

“They used to mess with me because we did the casket matches at some house shows and overseas to work on it before we did it. I’d always put a bottle of water in there to have because I’d be blown up from wrestling, and then they’d take it out and sit on the thing when they’d roll it in the back and not let me out. If you’re claustrophobic, you’re like flipping out. But it was just ribbing. But it wasn’t to me. I’m in the casket and there’s not a lot of room.”

“I think it was in Italy, a house show, with me and The Undertaker and I’m nervous. Thank God I was trained in OVW where you know how to work, you don’t have to call everything out because he told me, ‘When you’re upside down it’s all over. You okay kid?’ Basically, you get the Tombstone and it’s over. That’s all we talked about…the match starts out and we do some chain wrestling. I think I went to hit the rope and give him a tackle or something, and then the top rope broke. So basically, we can’t wrestle the sort of stuff you normally do. The top rope is broken, the match is gone in your mind of what you’re going to do. I had the deer in the headlights look. He had fallen down. He was looking at me. I looked down at him frozen, and he’s like, ‘Kick my ass, beat the hell out of me!’…that was like Defcon 50 to start the match nervously and then have the rope break.”

For more, check out the full interview at The Hannibal TV.

Also, check out quick quotes of Heidenreich’s thoughts on playing on the same NFL team as Goldberg. 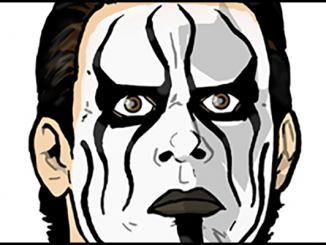 QUICK QUOTES: Sting talks whether he regrets missing out on a match with The Undertaker, when he fell in love with pro wrestling, Rick Rude