Rich Bocchini joins MSL once again to fill in for the still-MIA Court Bauer. MSL announces that Bocchini will be joining the MLW family as co-host of the brand new JJ Dillon Show on the MLW Network of podcasts. Rich was a big NWA fan growing up and jumped at the chance to get involved with MLW by working with Dillon.

Another story that everybody is talking about this week is Floyd Mayweather vs. Conor McGregor, which MSL says could the biggest professional fight in history. M wonders if it was a greater loss for WWE to lose Mauro Ranallo than vice versa (at the time of this recap it was announced that Mauro is back with WWE as play-by-play commentator for NXT). M also asks how much interest will cross over from wrestling fans to this fight. Rich doesn’t see the link between wrestling fans and MMA fans, but thinks it’s awesome and that the buildup will probably be way better than the fight itself. He thinks there will be crossover, but not a tremendous amount. M says we will get better wrestling promos from both guys than any wrestling promotion right now.

The guys get into Money in the Bank and the first ever women’s Money in the Bank Match. Rich says they built this up and keep pushing the women’s revolution and the crowned prince of WWE James Ellsworth grabs the briefcase. He hopes WWE knows where this is going, but it doesn’t help their cause of trying to put the women on equal footing with a historic moment. MSL says the angle that comes out of this really doesn’t matter because the damage has been done in a match where the women could’ve been put on the map. They also mentioned that WWE did get permission from Jerry Lee Lewis’s people to use the song.

WWE is pushing the idea that Lana is a serious, credible wrestler. MSL doesn’t think there’s anything she can do as a wrestler that will surpass her previous gimmick, which was a perfect role for her. Rich thinks the idea of getting a title match on a pay-per-view doesn’t mean anything anymore.

If it’s Lana’s first televised match then she hasn’t done anything to deserve this opportunity. Rich refers back to when WWE introduced Karma, and how it would have been more believable to put her in that spot rather that someone like Lana. MSL says she should have had a match lower on the card and beat her opponent rather than cutting out the steps that you normally take to build a contender. Rich feels the same way with the “jumping ahead” idea. WWE wants the moments, but they don’t build it up properly to mean anything, with none of the work done before or after to make the moment meaningful. They will probably go back to the women’s Money in the Bank Match and tell us how historic it was, even though at the end of the day the ending wasn’t meaningful.

Sean Mooney updates us on upcoming MLW programming, with WrassleRap with Kaz and Emilio talking New Japan, WWE, and hip hop every Saturday, Robert Karpeles and Alex Greenfield recapping Money in the Bank and Raw on Writer’s Room (VIP only) Thursday, and Bruce Prichard and Conrad Thompson talking about John Cena’s rise in WWE on Something to Wrestle With Friday. Also, Bischoff on Wrestling welcomes Ring of Honor’s Joe Koff and Primetime with Hacksaw Jim Duggan and Sean Mooney talk the art of cutting promos.

Big debut of the week was Mike Bennett and Maria Kanellis as “Mike and Maria Kanellis” on Money in the Bank. MSL doesn’t think the average WWE fan knows who they are, and asks Rich what their ceiling is. Rich says it depends on how much WWE refers to Maria’s past history with WWE, as they certainly won’t refer to Bennett’s run in Ring of Honor. Maria has been gone for 7 or 8 years, which is a long time, but Rich suggests that this could be a couple that could eventually feud with Miz and Maryse if they do another roster shuffle.

Jinder Mahal will be the Champion for a while until India gets going, according to Rich. Even if he does drop the title Rich’s gut feeling tells him that he’ll be in the picture for because of the opportunity in India. MSL guesses that John Cena will beat Mahal which will lead to Baron Corbin challenging for the title. MSL reiterates the reasons why he doesn’t see Corbin as a big star (t-shirt, body type, receding hairline, etc.), but Rich does see it and thinks Corbin has an aura about him. It’s an intangible thing that WWE has tried to tap into with the lone wolf theme, and thinks there’s something there, even though he could be a better talker. Rich doesn’t think he has to be the Champion to be a money guy if his character is handled properly.

WWE2K released another great trailer for their new video game, with Seth Rollins trashing a bunch of WWE memorabilia, which MSL assumes were replicas. MSL says it makes him want to see a physical WWE Hall of Fame. Rich mentions an idea that was floated with WWE adding something like this at Universal City Walk in Orlando. He would hate it to feel like a theme park attraction, even though that’s what it is at the end of the day. He just doesn’t think that the WWE Hall of Fame should be next to Simpsons Land or Bubba Gump Shrimp Co. Initially when they were looking at the Performance Center, WWE wanted space for something like this, but because of cost issues, it was nixed. They agree that there is so much awesome stuff to exhibit.

Simon Diamond, Shane Helms, and Al Snow were let go by Impact Wrestling, which the guys don’t have much to add, other than people who complain the most about not kissing ass (like Helms) tend to be their attitude itself that is the problem rather than their lack of ass-kissing. Rich finds that there’s a difference between the guys that walk around with a chip on their shoulder and the guys that go about their business without politicking. MSL feels bad for Simon Diamond, who had the unfortunate job of booking Nash & Hall segments in TNA. The end result was always “so Kev, what do you want to do?”, which seems to happen a lot per Rich.

Raw ratings were way up this week, which was probably helped by the NBA Playoffs being over. The WWE crowd takes to Samoa Joe but has rejected Roman Reigns despite being a part of his legendary family, which makes MSL wonder if the “just Joe” idea of him not being a part of this Samoan dynasty is a bad idea for the angle. Do you want the guy pleading the case that Joe is not part of this dynasty to be the one that the crowd is booing?  Rich agrees, unless it’s the jumping off point for Roman to turn his character a different way. If they do bring into the story that Joe’s not a “real Samoan”, Joe beating Roman makes Roman the outcast of the family, which Rich feels could be a catalyst for Roman becoming everything he’s not right now.

Enzo did bring up that The Revival were spotted backstage last week, which makes MSL happy after his comments from last week. Rollins has his “thank you” segment for the WWE2K cover, but MSL wishes that the “you deserve it” chant led to Seth saying that the fans didn’t deserve it when he stabbed them in the back, which could have really helped his face push. Unfortunately WWE talent is so scripted that they can’t go into business for themselves, otherwise, this could have been a terrific opportunity for Rollins to do so.

Braun Strowman returned, which the crowd went nuts for, and M wonders how Roman can be a babyface when the crowd gets so excited to see him get beat up. Rich gets the ambulance thing, but he’s tired of it, although it makes sense in bringing this storyline full circle. MSL says they’re not going to dig deep into the third hour of Raw, which has become increasingly difficult to get through lately. Rich adds that the agents had a similar frustration with the length of the show and the hours of preparation for it on a weekly basis.

The mystery of Enzo & Cass is solved. Corey Graves reveals that Big Cass was responsible for faking his own attack, followed by Cass turning on Enzo. MSL feels that there was so much money left on the table with these guys as a tag team based on their crowd reactions and getting so over despite being jobbed out. Rich thinks Enzo is tremendous on the mic, despite not having great in-ring work, but MSL says you can easily protect him and push him as high as possible until the crowd doesn’t react to him, and then you job him. Enzo is a legitimate loudmouth as per Rich, and wonders if that has anything to do with this latest outcome.

Rating – 8 out of 10. Perhaps I’m being a bit generous, considering I wrote this recap on the deck of my villa in Bora Bora, but despite the continued absence of Court, MSL continues to hold down the fort with topical discussions and interesting commentary on what’s been going on in WWE and the world of pro wrestling. 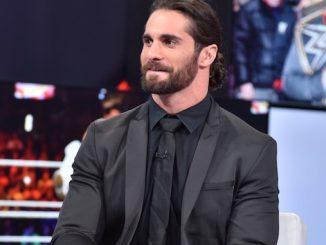 QUICK QUOTES: Seth Rollins on who his dream opponent is, the brand split, teaming with Dean Ambrose again