The Art of Wrestling with Colt Cabana

Before going across to the live show, there’s an introduction from Colt revealing that this week’s Art Of Wrestling was recorded in front of a live audience in Australia while he was on Tommy Dreamer’s House of Hardcore tour.

This week Art Of Wrestling is coming from the White Horse Club in Melbourne, Australia.

A common theme in Colt’s recent podcasts has been Outback Jack, or more specifically, the man who sang his entrance music. He brings it up once again since the man is from Australia, but leaves it at that as he equates talking about him to doing an hour long podcast about Chris Benoit.

Colt then asks the audience what famous Australian wrestlers they have now. He knows the guys in TM61 and mishears someone in the audience saying Buddy Murphy, thinking that he said Bloody Murphy.

Colt reveals that Marty DeRosa normally co-hosts with him for live shows but he couldn’t make it to Australia so instead Hornswoggle will be helping out.

Horswoggle says he’s not drunk and that’s a problem, so Colt asks someone to get him a Bloody Murphy.

They then discuss how many times they’ve been to Australia. It’s the fourth time Hornswoggle has been but the first time without WWE.

Colt asks what the difference is between touring with and without WWE. Hornswoggle replies that this time he actually gets to have fun, sell merchandise, and talk to fans. He recalls going to the Sydney zoo with Kofi Kingston once but nothing much else.

The conversation then gets on to whether there are ‘little people’ versions of other animals and the two have an idea to open a zoo together.

Colt then quizzes Hornswoggle about when the best time in wrestling was for him. He says that before WWE signed El Torito it was a lot of non-wrestling matches where he was more of a gimmick tag partner to various wrestlers. A fan in the crowd shouted out WEE-LC and Hornswoggle says it’s the best thing he has ever done.

Colt interjects and talks about how little people wrestling in Mexico get a lot of respect, but there is no real culture for it in the United States. He asks whether Hornswoggle learned a lot from Torito. Hornswoggle replies that Torito can do absolutely anything and he used to watch his work all the time. He also adds that actually getting to wrestle was awesome, as he knew that he could and it’s all he ever wanted to do.

Matt Cross says because there was a curtain on the way to the stage he felt really nervous as it felt like he was going out for a match.

Colt kicks things off with Matt by asking him about the tour of Australia he did where Ric Flair and Hulk Hogan wrestled every night. Matt says the first time he got the call asking him about it they told him they had Flair right after he had retired, so he didn’t believe them, and thought they meant an Australian Hulk Hogan.

Colt asks Matt if he managed to befriend Hulk or Ric on the tour, and Cross says that he was surprised by how they willingly took extra time to talk to everyone else on the tour.

Matt took a program that he had from a show he saw Hulk at as a child with him on the tour and was reluctant to ask Hogan to sign it. Colt tells a similar story with a Roddy Piper figurine. He regrets not asking him to do so, as he passed away a few months after he met him.

On the last night of the tour, Matt decided to ask Hogan to sign his program and talks about it hanging in his bathroom long after he’s finished wrestling and people asking about it. Once he had the courage to ask Hulk for an autograph, everyone else in the locker room started doing it.

Colt talks about Cross always trying to sell these foam swords on shows, and it dates back to the Hulk Hogan tour when his wrestling character was something called Spartan 3000. It came about when a Spanish show wanted to use him, but they needed him to be a character. They wanted him to be a lumberjack, but Cross thought it was a stupid idea as lumberjacks are a very American concept. Since the movie 300 was out at the time he came up with the idea of being a spartan.

On the last show of his tour as a spartan, someone stole the skirt that he would wear to the ring. A few years later he went back to Australia and someone brought it to a signing and asked him to sign it. He said that he was torn between signing it and beating him up. He went with the former.

Jack jokes that he and Hornswoggle have a death match booked, and Colt says that’s something he didn’t realize he wanted to see until that moment.

Swagger tells a story about him accidentally knocking someone out with his shins in a high school wrestling match.

Colt and Hornswoggle keep remembering that there’s an eight-year-old girl in the front row and Cabana asks how Swagger would react to kids while in WWE. He says that he didn’t have any tricks but he would try to make eye contact with them. Hornswoggle questions whether that’s a good way to entertain children.

Jack tells a story about how Chavo Guerrero had to dress up as an eagle and be his mascot at one point, but he doesn’t remember exactly how it started. He does remember Heath Slater did it one night and was terrible at it.

Colt then shifts the conversation on to Jack’s relatively new indy career. He replies that it’s nice to be away from the company that they all hate, but still watch. Swagger says the weirdest thing for him so far is that the ropes are different every night. Jack says that he’s loving it, but does add that he’s only been doing it for a month so ask him again in a year.

Jack says that one of the silver linings of leaving WWE is that he has been able to start his own merchandising company.

Tommy says that this is the second time he has been on Art Of Wrestling. Colt quickly corrects him as it’s actually the third. Tommy says the other was a WrestleCon so it doesn’t really count.

Dreamer says this is the first time since coming to Australia that he’s been able to do some proper sight seeing.

Colt asks Tommy about an indy wrestler from the early ’90s called Jake The Fake. Dreamer begins the story by explaining how he cured his fear of heights by booking himself in a scaffold match. Then he cured his fear of snakes by wrestling Jake The Fake and getting him to put his snake on his head. He also recalls some other fake wrestlers like Big Slam Vader, as well as a lot of Ultimate Warriors because of the rumors about the original Warrior being dead.

Hornswoggle interrupts to talk about how Tommy’s fear of everything affected them just the day before. Dreamer claimed that he saw a spider run across the hole when they were playing mini golf so he wouldn’t reach in to grab his ball. Colt says it took away from watching in him in ECW growing up a little.

Tommy wrestled his first two matches towards the end of 1989, which he likes as it means he can boast that he wrestled in the ’80s.

Colt asks him the biggest differences between now and back then. Tommy says there was no merch or t-shirts, and if you were an indy wrestler in a locker room and someone like Rick Rude would walk in, you wouldn’t even talk or make eye contact with them.

Tommy says that back then a bad indy show would be 600-800 people, and there would be a lot of shows to wrestle on a Sunday.

Hornswoggle says that the hated thing about indy wrestling now is that there are too many dives and asks what it was back then. Tommy says it was people doing ’10 punches’.

Dreamer tells a story about wrestling Taz years ago night after night where he would be suplexed off the top over and over again. Older wrestlers at the time would tell them that he would be in a wheelchair by the time he was 28.

Colt closes the podcast by getting Tommy to tell a story about a time he messed up during a match with Raven. They were wrestling in a high school gym and Tommy planned to swing from a rope at the top of the bleachers into the ring. Instead, Raven stole it from him and did it himself. Tommy then grabs another rope not realizing it was much shorter so just wound up spinning around in a circle above the bleachers.

Colt brings the curtain down on the show by thanking his guests and throwing back to his apartment for some plugs and upcoming events.

Many of Colt’s Art Of Wrestling shows have been live ones as of late, but this episode from Australia probably tops all the others. For starters, it was extremely star studded with the likes Swagger and Dreamer, each of the guests bringing some interesting and unique stories to their segment of the show. Oddly enough, the most intriguing tale came from the lesser known name on the show, Matt Cross, with his retelling of touring with Hulk Hogan and Ric Flair. While Hornswoggle was entertaining at points, this show probably would have been better of regular co host Marty DeRosa had been able to tag in.

Josh Coulson is a journalism graduate from Bristol, England. He has been a pro wrestling fan since the age of 10 and truly fell in love with the business during the build to WrestleMania X-Seven, citing the rivalry between Austin and The Rock as what really got him hooked. Other than wrestling he is a keen soccer fan and a long suffering supporter of his local team Bristol City. You can find him @BristolBeadz on Twitter.

For more, check out last week’s recap of The Art of Wrestling. 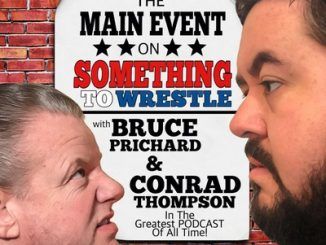 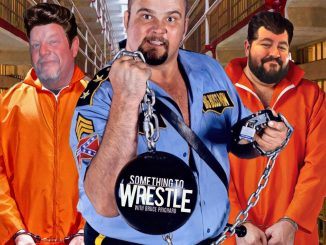 RECAP AND REVIEW: Something to Wrestle on The Big Boss Man – his series of matches with Hulk Hogan, where the Pepper/Al Snow idea came from, the major spot he missed with Steve Austin, canceled taser angle, feud with Nailz (Ep. 99)