During the Randy Savage edition of Something To Wrestle With Bruce Prichard, Bruce discussed a situation that illustrated Savage’s infamous overprotective reputation involving Elizabeth. If you’ve heard about the rocky relationship between the two but never knew what all the talk was about, this excerpt certainly shines a light on what it was like to work in such an environment.

“There was a show in Madison Square Garden where it was me, Liz and Sherri. It was the Brother Love show and my guests were Sherri and Liz. Well, Vince had an idea to have Sherri slap Liz. We were doing a double shot – we’d been in Washington DC that day, and the Garden that night and Chief Jay Strongbow was the agent.

“So, Vince had called me and said ‘Listen, you get Randy as soon as he walks in the door and you get Randy by himself, and this is what I want you to pitch.’ He gave me the whole deal of how he wanted Sherri to back Liz and for Sherri to end up slapping Liz and for Liz to come back and slap the s**t out of Sherri. Well, he said ‘I don’t want Strongbow pitching this to Randy,’ because Randy and Jay didn’t get along. He says ‘I want you to pitch it. But get Randy alone, and get him before Chief gets him.’

“So, Jay Strongbow hung out by the back door and as soon as Randy walked in the back door, Jay walks up to him, bags in his hand, and says ‘Uh, yeah, Caesar (Vince) wants Sherri to just slap the s**t out of Liz in that Brother Love thing. I think it was his idea.’ He’s saying this as I was walking up.

“I get Randy… and he’s already pissed, because all he heard is Sherri is going to knock the s**t out of Liz, and there was no coming back from it, and I tried and I tried. ‘Not happening, brother. Not tonight, not ever. And when I see Vince, I’m gonna let him know why.’

“So, we got a show to do, man. We gotta get from Washington to New York and we got the Garden that night and all this s**t, and I know Vince is going to be there. So, we do the show. We change it up a bit. We don’t have Sherri slap Liz and so on and so forth, but Randy’s wound himself tighter than… g**damn, he was wound up. We get to the Garden, and walk in and, of course Vince is sitting there waiting on me:

Vince: How’d it go, pal?
Bruce: Yeah, uh, Randy didn’t like it.
Vince: Well, what the f**k? How’d you tell him?
Bruce: Well, I didn’t exactly get a chance to tell him.
Vince: G**damnit, I told you to get him as soon as he walked in the door!
Bruce: Well, a little problem with that. Chief was at the door, and Chief got him walking through the door.

“So now I’m getting my ass chewed out. So now Vince is pissed. He’s pissed at me, he’s pissed at Chief, and he’s pissed at Savage. So now he’s all blown up and ‘G**damnit, when they get here, bring them in here.’

“So Randy gets there. Randy’s going right for Vince, Vince is going for Randy and they get in the office and I’m in the middle of it.

Randy: Brother, you wanna deliver a message to me, say it to my face. We got these things called phones, you can call him, you can call them, but you can’t call me?

Vince: G**damnit Randy, it just came up. You were on the road, I couldn’t get ahold of you; I knew I could call Bruce.

Vince: Now wait a minute, Randy. I told Jay what the idea for the night was, but I told Jay, specifically, not to talk to you about it, because I wanted Bruce because you guys have a relationship.

Randy: Alright, you want to hit her? Ok, what are we going to do, brother? Let’s hit her. Let’s just lay her the f**k out. What do you want to do?

Vince: God, you know. Calm down.

In the meantime, Sherri, who’s just an innocent bystander in all of this is all upset because she see’s Randy all upset. But she’s upset in a reverse way. She’s upset, sad, because she doesn’t want to hit Liz, and she’s in tears.

Vince: Alright, this is what we do. G**damnit, Sherri. I want you to hit her. Just slap her. Open hand slap, like this.

“And he slaps the s**t out of me, showing her how to slap Liz. I’m trying to no-sell it as I’m picking my teeth up off the floor. But Sherri’s like ‘I don’t want to do it.’ Liz is in Sherri’s face, going ‘Just do it. Slap me, just slap me, just slap me!’ Randy is pacing like a caged f**king lion. ‘’Yeah, uh huh, go ahead, brother. Take care of it. It’s on your head. It’s on your head,’ talking to Vince.

“We get out in the ring, and we’re standing there and I’ve got both of them out there. Then, somebody throws from I don’t know where, a bag, like, a Ziploc bag, full of mayonnaise. And it hits Sherri square in the face. It hits, and then it just kinda goes down her face and it just sits on top of her bosom. It’s dripping down and the crowd is going nuts and I’ve got the microphone down and going ‘Don’t you sell it, baby. Don’t you sell that s**t. So help me god, you better knock the living f**k out of her, but don’t you sell that s**t.’

“I turned to Liz and I said ‘Alright, it’s coming. Just fire back, knock the shit out of her back.’ I’m trying to talk to them both, and I’m shaking like a leaf, because I know if anything happens to Liz out there, the first person Randy’s going to go for is me.’

“They did it, and it all worked out fine and Liz was a trooper, but yeah. Randy was like ‘Uh uh, not happening, not tonight, not never. I’ll find Vince when I get to the Garden, yeah.’ It just was a f**king nightmare.”

For the full episode, check out Something to Wrestle With. 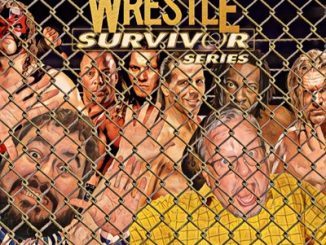