During this week’s episode of The Raven Effect, co-host Chad Damiani, AKA Busby, and Raven were discussing the Young Bucks and how their style is a tribute to the teams they grew up watching, such as the Hardy Boys. This prompted Raven to recall meeting Michael Hayes for the first time:

“You base yourself on people because you’re still trying to find your path. That’s how you find what to take, what not to take because we all take from everybody. Pieces from here, pieces from there.

“One of the coolest moments of my entire career, and the coolest moment at the time. I was working for Global Wrestling. It was on ESPN every day at 4pm and I was doing commentary. I’m living in Atlanta and I go to this club, me and my roommate Juan were there. I’m in the bar and I see Michael P.S. Hayes. ‘Holy crap, it’s Michael Hayes,’ and that’s who I wanted to be. That was my hero. You know, you go through your career and you have different heroes, but the guy I wanted to be from when I got into the business and who I always aspired to be like at that point before I went dark and depraved was Michael Hayes.

“While I’m debating with my roommate whether I should be a stupid mark or not and go over and say ‘Hi,’ and introduce myself, because there’s no way he knows who I am, this woman comes over and says ‘Excuse me, my husband would like to meet you.’ I go over and it’s Michael Hayes. It was his wife he’d sent over to come get me. And he goes ‘Man, I’m the biggest fan of yours.’ I’m like ‘Really?’ He’s like ‘Yeah, I see you on Global,’ and she’s like ‘He’s the guy? He’s the reason we have to watch that stupid show every day?’ He’s like ‘Yeah,’ and I’m like ‘How cool.’ Like, the ultimate compliment.

“Then I said to him ‘Man, that makes me feel so good, because you’re my hero. I stole so much from you,’ and he’s like ‘I don’t want to be mean, but I don’t see it.’ I go ‘That’s an even bigger compliment because that means I took what I learned from you and disguised it and made it my own.’ Because there were so many little things I took from his act that I thought looked exactly like me ripping him off, but apparently I put it into my own particular idiom.

“Me being such a schmuck, I was afraid to go over there and go ‘Hi, my name’s Scott blah blah, and I wrestle for so-and-so and I just want to say I’m your biggest fan,’ which I was going to do no matter what, I was just debating the coolest way to go up to him. To have him want to meet me was just ‘Oh my god,’ it’s just amazing, totally amazing.”

Also discussed on the episode is the current dynamic of Roman Reigns being hated on his own but loved as a part of the Shield and much more. The check it out, visit the Raven Effect on PodcastOne.

RECAP AND REVIEW: Talk is Jericho with Cody and The Young Bucks – the advice Vince McMahon shared with Jericho for All In, who came up with the name for the show, their plans after the event, if Cody would ever return to WWE 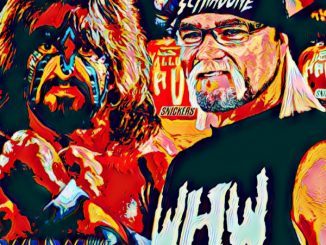