• Humorous and detailed stories throughout primarily from the 1980s and featuring many well-known figures in wrestling.

0:00 – Brian Last introduces us to the show and Jim is pleased with this week’s efficient introduction! Jim then tells a funny story about Bobby Eaton’s 2 1/2 year old daughter, Taryn, causing a car accident when she climbed into Bobby’s car, released the handbrake and the car rolled into a neighbor’s garage. Jim saw the ticket and it named the offender ‘Taryn Pricilla Eaton, aged 2 1/2.” Arm Anderson also lived on the same street.

5:00 – Jim talks about the ‘name test’, which Vince McMahon loved and Jim used when deciding talent’s names. If you could imagine a ring announcer saying the name ahead of a world title bout and it sounded credible it passed the test, for example, ‘For the NWA Title, ‘Nature Boy’ Ric Flair versus Ricky ‘The Dragon’ Steamboat.’ An example of a name failing the test, for Jim, is Flash Funk. Jim laments wrestlers not having backstories anymore and many having ridiculous names. He cites Alex Porteau as being very talented but saddled with an unhelpful gimmick around that time of Cornette’s first WWF run.

10:02 – Jim and Brian discuss Jim Neidhart wrestling under a mask as Who in the mid-90s WWF. Cornette suggests that management didn’t particularly want Neidhart around but he kept his job to keep other members of the Hart family happy.

12:04 – Question about how Jim rates Bret Hart. He thinks Bret was an elite level worker who sometimes took himself too seriously but wishes wrestlers today would do the same. Brian states that he always thought Bret had better matches but Shawn Michaels had better performances, and Jim agrees.

14:42 – Jim is asked about how he thinks The Midnight Express would’ve done if they had gone to Jim Crockett Promotions straight from Mid-South with there being no Rock ‘n’ Roll Express, no TBS deal, Dusty trying to recover as booker from a poor 1984 at the box office and the only babyface tag team being Dusty and Manny Fernandez, who rarely teamed together. Or were the Midnights better off coming in to JCP when they did? The difference was only about six months and Jim thinks The Rock ‘n’ Roll Express would’ve come in there anyway, although it was a positive that Dusty was able to establish the Rock ‘n’ Rolls before the Midnights got there. Jim thinks it was better the way it all unfolded but the other way could’ve worked, too. Lots of little tidbits about crowd sizes in various towns, who the Midnights worked and wrestler pay.

23:18 – Jim is asked about The Fabulous Kangaroos, a main event tag team for decades, starting in the late 1950s. Aside: The first tag team match at the Louisville Gardens involved Roy and Herb Welch in 1943. The Kangaroos utilized a lot of quick tag teamwork and invented ‘the boomerang’: “hook the guy’s f*****’ legs and fall backwards and when he comes up straight, you backdrop him or you do whatever the f*** to him. The boomerang. You throw him over the top rope that way.” Various wrestlers were involved over the years including Al Costello, Don Kent and Roy Heffernan. Al Snow was trained by Al Costello and was briefly part of a tag team called The New Kangaroos.

31:25 – Question about Bruiser Brody and where his reputation for causing headaches for promoters first surfaced. Brian suggests it was when he was working for Bill Watts early on, and had just established a career in Japan. In his book Stan Hansen says he thinks Brody had became too paranoid in thinking that promoters were trying to screw him out of money. They then talk about the infamous Brody/Lex Luger cage match and Jim recalls how Tully Blanchard used to roll his eyes at Luger’s pampered, entitled status but Luger was never seriously ribbed (that Jim can remember).

39.20 – Story about ‘The Snowman’ Eddie Crawford winning the Southern Heavyweight Championship in Memphis from Jerry Lawler, who then defended the belt at shows where Lawler’s non-title match was the main event. Unhappy with pay and his push, Crawford left the USWA without dropping the title and was accused by Eddie Marlin of pawning the belt to a drug dealer. Crawford denied this, stating that he’d merely said he would rather sell the belt to a drug dealer than give it back to management. ‘The Snowman’ Eddie Crawford was perhaps Bill Watts’ most obvious and egregious attempt to replace Junkyard Dog with another black babyface. Jim would’ve pushed Jim Duggan at the time.

48:00 – In his autobiography, Jim Ross says that Robert Gibson’s farts were particularly pungent but Cornette can’t comment as they never traveled together. Cornette then tells a story about how one of his farts made Bobby Eaton, Dennis Condrey, Buddy Landel and Carl Fergie gag at a gas station.

54:10 – Jim confirms that Vince once pushed him in the pool and gave him a large designer jacket to wear afterwards.

56:30 – Jim suggests that moving away from their core audience in the Carolinas was instrumental in poor gates for WCW in 1989/90. He also cites an article in the New York Times featuring a quote from Jim Herd about ‘changing the script’ as damaging business because he basically followed Vince in admitting it was a work, as well as the loss of talent, like The Road Warriors, that many people wanted to see.

1:02:20 – Jim talks about a match from Smoky Mountain Wrestling’s Thanksgiving Thunder in 1995, in which he was beaten by a little person wrestler called Butch Cassidy. Jim says the first time he ever saw a manager do something like that was when Bobby Heenan with The Blackjacks taking on The Crusher, Dick The Bruiser ,and Little Bruiser in front of a sell out crowd at the Indianapolis Expo Centre and twenty three years later paid his own homage.

1:05:00 – show closes with plugs for their other podcasts, Corny YouTube and Cornette’s Collectibles.

There are lots of funny little stories featuring wrestling names from the past, so if that’s your deal I’d definitely recommend this podcast. Cornette and Last are very knowledgable and have great chemistry.

Paul is just a guy from England who watches wrestling and listens to podcasts! 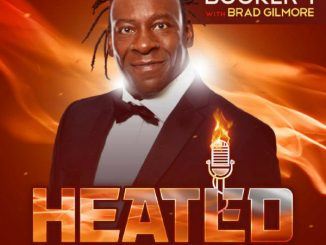 QUICK QUOTES: Bill Goldberg talks about being inducted into the WWE Hall of Fame

WRITTEN PODCAST RECAP: Jim Cornette’s Drive-Thru on if he tried to bury Ken Anderson in OVW, thoughts on The Honky Tonk Man, Adam Bomb, who Luna Vachon wanted to knock out, if he owned a company would he book Kenny Omega and The Young Bucks? (Ep. 52)