0:00 – Intro: Jim welcomes us to the episode and says we’re getting a bonus Drive-Thru episode to catch up with listeners questions from recent weeks and jokes “If the episode sucks, it’s your fault!” He introduces co-host Brian Last and they briefly discuss what the format of the Drive-Thru is as a podcast, with Brian asking Jim questions cold.

3:50 – Breaking the internet/Cornette collectibles: Jim discusses the sale of signed Midnight Express books (see episode 209) and how his website fell apart and oversold the book before they got on top of it. He then discusses business in the run-up to Christmas.

9:42 – Health insurance: Jim updates us on his recent trouble finding health insurance before the deadline, mentioning how he is asked by listeners outside the US. Briefly discussing Obamacare, the Republican efforts to remove it and the ideal situation of ‘Medicare for all’. Twice in the last few years, Jim has had his plan removed by the provider when it came time to re-subscribe. Now, he and Stacy are finding a lot of local insurance companies only work for the over-65 Medicare audience. Jim finishes up comparing the healthcare situation locally against what he has received in the UK and Canada.

16:35 – Political promo: Jim moves from health care into the tax reform bill. Adding to the discussion last week, Jim talks about the squeezed middle class and how they are left with little money in such situations, but how it has been sold as benefitting them. Jim then attacks Trump for selling off land in Utah for oil drilling before mentioning the Roy Moore campaign and stock market again.

27:42 – Listeners Questions: The first question concerns Vince McMahon’s eating habits and the questioner asks if it’s true he would carry a lunch box. Jim says Vince views food as fuel and would often eat the same thing and quickly so that he and everyone could get back to work. He shoots down Vince carrying a lunch box. Cornette says Vince would eat in nice places, but often simply and healthily. Post shows, this made life miserable for anyone traveling with him, often not stopping to eat until 3am as he wouldn’t go to a drive-thru.

32:12 – Ring ropes clicking: The next question concerns Jim Crockett Promotions rings and how the ropes had a very specific sound. Jim says only the WWF and AWA would use ropes on their rings, Southern rings were smaller and would use steel cable instead of ropes. These were then wrapped in rubber tubing and then taped. Jim says the sounds heard was the rubber hitting the cables under the tape.

35:34 – Barry Windham and the Horsemen: The next question is about the 1988 Barry Windham heel turn, when Windham turned on his partner, Lex Luger, when they were tag-team champions to join the horsemen. The listener wonders if this was the plan or if it was a reaction to Dusty’s Midnight Rider gimmick not exciting business. Jim thinks it probably was, but can’t speak to Dusty’s thinking. He says Dusty did work on long-term ideas, but would often change plans week-to-week.

37:42 – Smokey Mountain Questions: Did Jim ever considered bringing in Bill Dundee to work with Jerry Lawler who occasionally did a few shows? Jim says no, he was still very busy in Memphis and wouldn’t see much to be gained from it. Cornette talks about people he did bring in and why, but that he was more often sending people to Memphis rather than needing them to come to SMW. He’s then asked if he considered Tully Blanchard, which again is a no, as he was on his way to retirement and mostly working in Texas.

42:45 – Chick Donovan: Jim is asked about his memories of First Family member Chick Donovan and why his push didn’t last. Cornette answers that Chick was older than he looked and while he looked good and could work, he suffered a knee injury and struggled to bounce back.

47:54 – Jay Youngblood: This question asks what happened to Jay Youngblood after his period tagging with Ricky Steamboat. Jim answers he was a promising member of the Romero wrestling family and had trouble with drugs, having a heart attack in 1985. He believed they were an incredible team, but he couldn’t stay clean. Jim believes Steamboat has spoken on the matter, worrying about Youngblood, but being unable to tell another grown man what to do with his life.

51:32 – 1987 War Games: Asked about this match Jim says he almost forgot about it. It was the JCP debut in the NYC/NJ area and Jim talks about how he hid in a New York McDonalds bathroom after their limo driver locked the keys in the car in a bad neighborhood. Jim then talks about the Nassau Coliseum being a tough crowd and how, at the time, he didn’t know what the northern crowds would be like. Brian says it’s just the New York crowd and they joke about how they’re either silent or it’s a riot.

57:18 – 1998 Raw backstage: Jim answers a question about the backstage threat segment where he was strangled by Big Bossman after running into McMahon’s wheelchair. Jim says it was done as written by Russo and Ferrara, but feels it could have been better if it hadn’t attempted to appeal to only a small section of smart fans.

59:34 – Victor Quinones: The next question asks about the Puerto Rican promoter and if he had a dark side. Jim says all his dealings with him were good when he brought talent to SMW and when they worked together in WWF.

1:01:45 – Jim Cornette’s Collectables: Jim is asked about the inner workings of his memorabilia business. Jim says Stacy deals with the website, Jim gets the orders on paper, grabs the items, signs almost everything, labels it and takes it to the post office, usually within 1-3 days.

1:03:58 – Necessary Evil/Tazz in WWE: An email mentions Brian is a necessary evil on the show and they joke about what that means. Then they discuss Tazz‘s run and whether it was a flop. Jim says while he wasn’t pushed as hard as Heyman had done in ECW, he wasn’t aware he was considered a flop. Jim then admits he was busy with his own shows and didn’t often watch much WWE so he missed most of Tazz’s run.

1:06:35 – Angelo Mosca Jr: The questioner asks if Mosca Jr was the worst second generation superstar and if his father had strings pulled to get him his shot and title reigns. Jim says it was in an era of rewarding stars that had made money previously, so while not entirely untalented, Mosca’s push may have been a favor to his father.

1:08:23 – Bar fight: The last question asks who Jim believes would win in a bar fight between Haku, Bruiser Brody, Dr. Death Steve Williams and Harley Race. Jim works through each and weighs the options based on ability to wrestle versus street fight, before claiming Harley would just pull his handgun, shoot the other three and then go outside to smoke.

Another whirlwind episode for the Experience this week and a nice taster of Jim Cornette’s Drive-Thru podcast for those who don’t often listen to it (which includes me). Covering a lot of topics at speed and with good humor, this was a short but fun ride of an episode, and for that reason, I think there is probably something here for everyone. It felt a little like a placeholder show, where nothing was really planned and they found something to fill the gap, but that doesn’t detract from all it did well. It’ll probably have me and others listening to the Drive-Thru podcast a bit more often.

Mark is an English storyteller, joker, and drunk.
This week he is mainly snowed in and catching up writing podcast recaps. 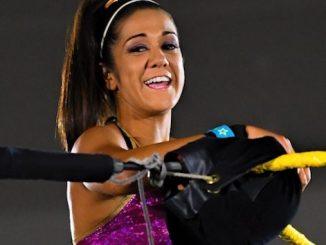 QUICK QUOTES: Bayley on Sasha Banks, defending her title in her hometown, the legend she credits for helping her find her character RECAP AND REVIEW: Something to Wrestle with Bruce Prichard on Survivor Series ’98 – who wrote Rock’s heel turn storyline, The Big Boss Man’s major screw up, the tag teams who didn’t have chemistry together, why Vince McMahon wrote a letter of apology to Steve Austin