Lana was a recent guest on the on 107.7 The Bone with Baby Huey & Bimbo Jimbo and talked about the upcoming Women’s Royal Rumble and Total Divas. Here are the highlights they sent along.

On how Rusev felt about Lana becoming a part of Total Divas:

“He definitely wanted to do it. He fully supports me, and so he was excited to do it. He’s a character. He’s so funny. So, he’s just himself on that like “Sure if cameras want to follow me around that’s fine. I might just be naked at my pool. It’s not my fault the cameras are here.” Which you guys are going to have to watch Total Divas. That might happen next week.”

If she was worried dropping her accent on Total Divas could damage the Lana character:

“I wasn’t nervous. Maybe other people were nervous, but I wasn’t nervous because we are story tellers. When I walk through that curtain on Smackdown Live I am a Russian villain, at least at this point in time. To me when just like when you watch a movie or you watch a TV show to me you know Nicole Kidman or Leonardo DiCaprio you know that they are actors, but also great actors find that extension of themselves. So, when I walk through that curtain I find the extension of myself of being the Ravishing Russian in there. We are actors, we are entertainers, and most of all we are story tellers…I was actually really excited because to me it’s giving the world the chance to see that we are story tellers.”

On if she had actual heat about her engagement to Rusev:

“The truth was that Vince McMahon just decided to go a different route, and that’s just what it was. Rusev and I were trending for like three days straight “Rusev and Lana are engaged”. He just made the decision at that time he goes ok I want to bring them back together…People are always going to talk. I think for 6 months after that the headline was Lana has nuclear heat, (laughter) and I am like great! You know, you’re talking about me.”

On being a part of the first ever Women’s Royal Rumble:

For the full interview, check out 107.7 The Bone with Baby Huey & Bimbo Jimbo. 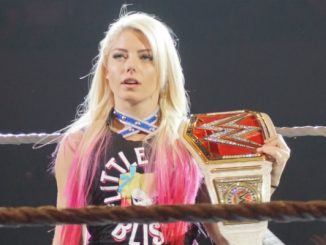 QUICK QUOTES: Alexa Bliss on how her friendship with Nia Jax started, an unused idea she had for the Mickie James feud

1 Comment on QUICK QUOTES: Lana on if she was worried dropping her accent on Total Divas could damage her character, being in the Women’s Royal Rumble