On today’s show, Eric and Conrad talk about the Souled Out 1998 PPV.

-Starrcade ’97 was the most profitable WCW show ever. On the heels of that show, Sting got stripped of the WCW title on Thunder. Leading into Souled Out, the WCW did not have a champion. Eric says controversy was working for the WCW financially and creatively so it didn’t bother him they didn’t have a champion.

-Meltzer reported an article was written about Starrcade 97 being the most successful PPV show for WCW. Additionally, WCW had back to back years of increased house show attendance of 56% and 59.1% in 1996 and 1997 respectively.

-Eric says he started seeing the effects AOL merger in early 1998. As the year wore on, it got worse and people who normally wouldn’t pressure Eric started pressuring him.

-Meltzer reported that the perception of the industry was that the WWE was losing to the WCW for the first time during the Monday Night Wars. This ignores that the WCW was beating the WWE in ratings the year prior but nobody was paying attention.

-WCW gates had grown averaging $101,736 per show. When Eric first came to the WCW, he never thought they would ever get to $100,000 at a house show but it became expected.

-Eric talks about how the Nielsen ratings could be misleading and may not be as high as people thought it was.

-Meltzer reported WCW business didn’t have to take a back seat to the WWE as they drew record houses on January 31st and Nitro on February 2nd.

-Eric says the success they were having in 1998 was a result of the creative, marketing and promotion of things they were doing in 1997.

-Eric talks about how hard it is to not only get momentum but keep it going. He assumed once WCW got momentum, it wasn’t going away which wasn’t the case. An audience will be somewhat forgiving of a product for a period of time but there will come a time where they decide they don’t like the product and at that point, it’s almost impossible to get them back. He goes on to say an executive producer at NBC told him that once the audience votes with their remote, you’ve lost them forever.

In early 98, WCW was still doing OK but the audience hadn’t quite voted. They were reaching for the remote but hadn’t made the decision they were going to change the channel. They still had the audience because of all the time and creative from 1997.

-Davey Boy Smith signed a deal with WCW however, when they examined him, they found he had a torn ACL that needed surgery which would have put him out 7 to 8 months. He decided to not have surgery and get a scope instead. This was off the heels of the Montreal Screwjob. Eric wanted to bring in Davey Boy as a tactical move. They wanted to build business internationally which is something they hadn’t looked at and felt Davey was one of the guys who could help with that.

-On December 22nd, prior to Nitro, Eric had a meeting with the wrestlers emphasizing he didn’t want low blows, swearing or lude gestures. He felt they should differentiate themselves from the WWE and didn’t want both companies to be painted with the same brush.

-Executives above Eric thought the new direction of WWE would cause advertisers to abandon WWE and flock to WCW if the WCW went with a family friendly product. That shift began to undermine the WCW’s success. It wasn’t sudden but rather a gradual decline of the product. Eric however, had to tow the company line which he hated and he says this is when it quit being fun for Eric.

Nitros and Thunders Leading To The PPV

-Meltzer reported Kevin Green was interested in coming back to professional wrestling. Even though he was wasn’t a ring technician and had very little training, he did OK in the ring because they were able camouflage his weaknesses. Green had a big personality and if he had been given proper training, he could have been successful in the business.

-Meltzer reported Debra McMichael was dumped, which left Elizabeth as the only woman with a role left. When she first came to WCW, she was there to support Steve but as she became more of a character on camera, her head got big and became way too much maintenance.

-Meltzer reported the event sold out in four hours of tickets being put on sale a month earlier.

-Chris Jericho won the Cruiserweight Title from Rey Mysterio. After the match, Jericho attacked Mysterio’s knee as Mysterio needed to go for surgery and this was used to write him off the show. Rey and Chris had great chemistry.

-Mean Gene interviewed Roddy Piper and says the WCW title will be decided in a rematch of Hogan and Sting on Superbrawl. Eric made the announcement on PPV as opposed to the TV shows to try something different than the WWE.

-Booker T retained the TV Title against Rick Martel. Meltzer reported the crowd was not into this match because there was no story or build behind the match. Eric agrees.

-Larry Zbyszko got a DQ win over Scott Hall. During the match, Dusty turned heel and joined the NWO which is something Eric wishes he hadn’t done.

-The Steiners and Ray Traylor beat Konnan, Marcus Bagwell and Scott Norton. Eric says this was bad booking and a bad match.

-Kevin Nash beat the Giant. During the match, there was a botched powerbomb against the Giant where the Giant got dropped on his neck.

-Bret Hart beat Ric Flair. Eric thought it lived up to expectations. It may not have been as crisp as it would have been 5 years prior but the story was good. Bret in his book buried Flair but Eric defends Flair and says Bret was bitter and self serving when he wrote the book.

-In the main event, Lex Luger wrestled Randy Savage. During the match, the NWO came out and Sting came out to make the save. The show ended with Luger wracking Nash and Sting with Hogan in the Scorpion Deathlock. Eric says this may not have been a good match technically but this got a good reaction from the crowd which is what he was looking for at the time.

Generally speaking, I’m usually fascinated by the business side of things and Eric is usually really good at summarizing that. However, this podcast was all over the place and while there were good details it was a little hard to follow at times. Also, this podcast was around 2 and a half hours, but most of it was spent on the business side with the last 45 minutes being about the PPV itself. However, it was interesting to hear about how the AOL merger started slowly affecting business and I thought Eric talking about the momentum of the company pretty fascinating. Overall though, I’d give this one a medium recommend.

QUICK QUOTES: Jim Cornette reveals how he bonded with Eric Bischoff over their “hatred for the biggest idiot in wrestling history” 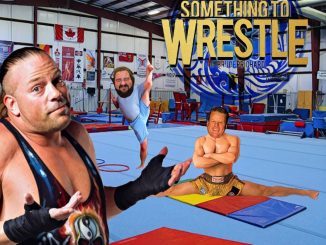 WRITTEN PODCAST RECAP: Something to Wrestle on Rob Van Dam – how Paul Heyman may have manipulated RVD, why the ECW/WWF relationship fell apart, who Van Dam refused to job to in ’97, why he didn’t get along with Chris Jericho (Ep. 97)