0:00 – Intro. Jim once received a telegram during his time in WCCW. In the old days finishes were sent via telegram using words like ‘broadway’ to keep their messages aloof. Funny intro, even if you “don’t like sodomy.”

12:49 – An emailer recently saw that Mantaur is making a return over Wrestlemania weekend, will anyone care?

Jim: “Actually more people will now than did then because the legend of Mantaur has grown, so good for him.” Jim talks about managing Mantaur on a WWF TV taping and the tape still exists somewhere. Corny thought Bruce Prichard was ribbing him when he was first told. Awful worker with “no timing… like he was underwater.” Leads into a brief Man Mountain Rock/Maxx Payne discussion – Jim was quite high on his potential and liked to be around him.

16:24 – WWE is currently dealing with multiple wrestlers requesting releases, should they be concerned?

There were certainly more options during the territory days because there were more places to work and make good money. Jim: “You can tell if the WWE feels like that they have no competition or somebody’s no good because if they ask for their release they’ll give it to you (them). That means either “we’ve got no competition” or “you’re the s****” – go.” Jim can see how WWE wouldn’t want to “set the precedent” of granting wrestlers’ releases to go to other promotions and be used well as it would affect morale and attitude. Going forward it’ll be a very “dog eat dog” landscape when it comes to contracts, with AEW looming and NJPW making inroads in the US. Jim surmises that Vince’s inner circle is telling him that AEW is “throwing money around… we need to nip it in the bud” rather than telling him that some talent is upset at at been booked poorly.

21:35 – Corny’s impression of Handsome Jimmy Valiant circa ‘76/77. Brian talks about Valiant giving an in-character autograph to Scott Bowden’s mother (for Scott) at an airport.

No but he’s surprised that more of “the boys” have not been asked to help “put together a more realistic struggle” in movie fight scenes over the years.

27:32 – Did Jim have any dealings with the East Coast Wrestling Association, running out of Delaware by Jim Kettner, in the late 1990s as they were affiliated with the WWF?

Jim worked for Kettner “a time or two” and he was a friend of Dennis Coralluzzo. When Corny went up to Connecticut to work in the WWF office he was in charge of third party bookings and used a lot of their talent. Jim: “They showed up, they did a good job, they looked good and, you know, they were the cream of the crop.” Jim talks about one of their talent called Boogie Woogie Brown.

Jim: “He was this black guy… in his forties or whatever… he had great music, a great entrance and he didn’t do stupid s*** that embarrassed the business, at least when I saw him. He was older, he was out of shape but he was over with the crowd in their building. He didn’t get booked on WWF TV and he understood why but he wanted to be around the business and enjoyed working there and was a good guy.” ECWA put on “real good shows.” Brian links this discussion to the previous discussion about AEW regarding independent wrestlers’ contracts and competition with other major companies at that time.

33:57 – Does Jim have any funny stories about working in Burlington, Vermont for the WWF and is it true that Undertaker is banned from there?

Jim has never heard anything about Undertaker and doesn’t “know why that would be.” Burlington was the first place in the US that Andre The Giant worked whilst in Montreal (Burlington used to be part of that territory). Jim talks about having his bag padlocked to the lockers up there by the Steiners after a show, having driven up there from SMW and wanting to get back ASAP. That would be annoying.

37:01 – At the 1988 Bunkhouse Stampede Jim was in Bobby Eaton’s corner as he challenged Nikita Koloff for the NWA TV title. The match went to a time limit draw, on pay-per-view, why was this and did it happen often in JCP?

Jim: “That was the bottom point where just about everything involved in Jim Crockett Promotions, the business end, f******’ Dusty’s booking, everything lost the plot at the same time… that was the worst big show that Crockett ever did.” Jim talks about the wrong bell time being put on some tickets. Absolute fiasco. That was JCP’s big incursion into WWF territory and many mistakes were made. Headlining with a bunkhouse stampede when Vince had trained fans to want to see the stars on top put them behind the eight ball from the start. Jim: “I was out there twice that night and I wanted to cut my f******’ throat at ringside at that dead-a** crowd, that dead-a** show and that dead-a** building.” Jim talks about mouthing off backstage after the match and Jim Barnett being unhappy with him.

43:13 – Brian’s butchering of an emailer’s name and Jim’s reaction is hilarious.

45:43 – Jim has often maligned the Nassau Coliseum (site of the aforementioned 1988 Bunkhouse Stampede) but what was the Meadowlands like to work in? The Meadowlands was Jim’s favourite place to work in the New York area in terms of parking and getting to the arena. The crowds were “loud” and “got into it.” Jim saw Kiss there on New Year’s Eve ‘96/7 with Chris Candido and Tammy Sytch!

47:38 – Could Sunshine have had a bigger run in wrestling?

Jim: “She was real good, she did get the business.” She had a lot of positive attributes for wrestling work but for whatever reason she just moved on. Jim: “I have to think that that was her choice,” maybe wrestling just “wasn’t for her.” Jim talks about working with her in WCCW and also mentions that she was linked to Hercules Hernandez personally as well as professionally.

Jim doesn’t know, they’ve always been cordial to each other.

56:10 – Why would a wrestler want to practice a match, as was reported before the Ronda vs. Sasha match at the Royal Rumble?

Jim: “She’s (Ronda) a world class athlete, she brought tremendous attention to the product and credibility so if they need to walk through a match with her, especially a first year of her career at this level of exposure, I don’t have a problem with it. The debut with Triple H in the mixed tag, that was f*****’ art, that was the best match on the show. She’s been more than carrying her end.” Good on-the-job training would come in the form of house show matches and Jim’s not sure that Ronda should be having a fifteen minute match with Sasha anyway, for believability’s sake.

59:50 – In SMW did Bobby Eaton and Dr Tom Prichard have organic tension or did Jim come up with it?

Jim came up with it, it made sense for Stan Lane’s old and new partners to be uncomfortable with each other.

1:02:25 – Jim reveals that one of Gary Hart’s lessons was “Repetition is the key when dealing with goofs.”

In that part of the country, yes but at least one person would definitely complain. Smothers wrestled a baby face style so maybe he’d just have to drop the flag and continue doing the same things. Jim never heard any complaints from the black audience at the time but “there’s a lot more attention on it now.”

Jim: “He didn’t do anything that he couldn’t do well but everything he did, he did exceptionally.” Everything was believable, nothing outlandish and his father, Johnny Valentine, was a master of wrestling psychology. Slow, methodical but incredibly believable. Jim and Brian discuss Jim converting Mid Atlantic tapes in 1989 and seeing the Ric Flair/Greg Valentine team amongst other gems such as the Harley Race vs Ricky Steamboat match.

1:09:52 – Shortly after Mr Wrestling II (Johnny Walker) turned on Magnum TA did he drop the ‘II’ and just go by Mr Wrestling? What did he think of the angle where Hercules Hernandez became the new protégé and took the Mr Wrestling II name?

He didn’t really care because he was “about ready to retire.” He did drop the ‘II’ after the turn saying “I’m Mr Wrestling, I’m the man” before moving onto a program with Junkyard Dog. Jim talks about Mr Wrestling II and JYD botching a “loaded knee lift” spot in a match in Mid South for the North American title and the decline of JYD. Jim recalls Bill Dundee (who was booking Mid South at the time) complaining about JYD “doing the s***” and not being “in a good place” at that time. 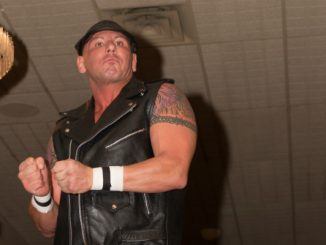 QUICK QUOTES: Big Vito on getting over in WWE while wearing a dress, Paul Heyman helping him decide to leave ECW

PODCAST RECAP AND REVIEW: Jim Cornette’s Drive-Thru on the random genesis of his feud with Vince Russo, the worst match he’s seen from a great wrestler, why Dusty Rhodes chewed out Big Bubba Rogers (Ep. 44)