-Steve Austin turns the interview chair over to Wade Keller for majority of show.

– (2:50) Keller and Austin discuss the Bailey vs. Sasha Banks match.

– (18:00) Back from break, Austin and Keller discuss the Samoa Joe vs. Baron Corbin match.

– (24:58) Austin transitions to a discussion about NXT announcers.

– (35:39) Back from commercial, Austin hands the reigns over to Keller for questions.

– (36:01) Keller asks if Austin’s career would have been affected if he had kept his hair.

– (37:40) Keller asks what Austin thought to be true in his 20s that he knows today to be different.

– (38:50) Which person was more “full of it” when it comes to talking about their role in pro wrestling in the ’90s: Eric Bischoff or Paul Heyman?

– (42:25) Would Andy Levine had benefitted from slapping McMahon back on Raw?

– (47:32) How different are fans today compared to when Austin started his career?

– (50:54) Would fans enjoy pro wrestling more if they felt they had less control over it?

– (52:40) Austin discussed the importance of referees in assisting matches and getting over talent.

– (57:05) Keller talks about how special Chris Adams was in WCCW as a heel and a babyface.

– (1:02:29) Keller asks Austin if any other wrestler could have been inserted into Piper’s spot at WM1.

– (1:16:50) How does prepping for his podcast resemble how he prepared for promos or matches?

– (1:20:10) Has Austin came to the realization that, even though it ended prematurely, his life is better because his career ended early.

-Austin and Keller had a lot of praise for the women’s match at Takeover Brooklyn. Steve is very impressed with Sasha Banks’ gimmick and her in ring work. He enjoys the way that both Bailey and Sasha ‘covered’ their calls in the ring. Austin remarked that matches such as this remind him why he loves wrestling. Wade called the match ‘great’. Keller told Austin that Bailey’s bumps remind him of Austin’s from WCW.

–Austin is a big fan of Samoa Joe. He enjoys Joe’s ring style and work. Both Keller and Austin agree that the way Joe finished the match was excellent.

–Both Austin and Keller agree that Owens and Balor are future stars if given the freedom to be themselves. Keller believes that the time to move on Balor is quickly approaching.

–There was a lot of discussion during the Q&A portion of the show about WCCW. The host and his guest clearly were influenced by the Dallas territory.

–Austin had a lot of positive things to say about working with Trump at WM23.

– Austin remarked that he never listens or watches any of his finished podcasts to which Keller says he does not either.

–Austin asked Keller what his match of the day was to which Keller answered, Chris Adams vs. Gino Hernandez at the Cotton Bowl in 1985.

–Austin gave a passionate promo as to why the Freebirds need to be inducted into the HOF this year.

Closing Thoughts: Once again, Austin and Keller deliver a very strong show. They have a chemistry which makes for an entertaining listening experience. Both hosts are passionate and enthusiastic about pro wrestling and its overall impact on their lives. I particularly appreciated Austin’s ability to be honest about how life on the road had positive and negative effects on his life. Keller asks Austin timely and specific questions which is one of the traits that makes him an all-time great in the industry. Although this show is longer than normal, I still recommend it for the level of knowledge and entertainment it provides. 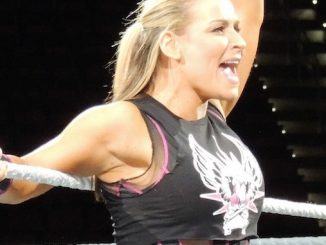 QUICK QUOTES: Natalya on how she prepared for Money in the Bank, the women wrestlers who have reached out to her, the Mae Young Classic

RECAP AND REVIEW: The Steve Austin Show with Kalisto on being inspired by Rey Mysterio Jr., how a guardrail saved his life, why he had decided to quit wrestling, Lucha House Party, designing his masks