– Colt Cabana interacts with fans and tells stories from WrestleCon 2016.

0:00 – Introduction – Colt opened the show noting that this episode was the first of two live podcasts taped in Dallas. Colt plugged his sponsors and upcoming events.

2:36 – Live show introduction – Colt opened the live portion of the podcast joking that he was taping right next to an autograph line for the Hardy Boyz at Wrestlecon in Dallas. Colt introduced Marty DeRosa as his sidekick, and they made puns on “Brothers of Destruction” as their name as a team. Colt went into some of his interactions at Wrestlecon. First, Colt overheard Road Warrior Animal say “this was before AIDS” and DeRosa clarified they were talking about spitting blood out before AIDS. Colt talked about meeting a fan named Deek, which he misheard as “Dick,, and a female fan asking some Irish fans if they knew Conor McGregor. Colt shouted out a wrestler named “King Size” from Chile and a fan whose mom is dating Mantaur.

10:01 – First Guest: Buff Bagwell – Colt introduced Buff Bagwell as someone who was going to be in a top hat despite the fact that he’s on an audio podcast. Bagwell talked about the American Males theme song, saying that it was really good music, but the vocals were terrible. Bagwell recently had total replacement surgery on his right shoulder and he’s been recovering well. Colt asked who makes Bagwell’s hats, and Bagwell said that he had 20 hats at one point, but he’s slowly gotten rid of them all and is trying something new with his hats. Bagwell talked about the guy in WCW designing his tights and hats, but they eventually started being very poor quality so he had to go to Happenin Cats in Georgia, who also take care of the Steiner brothers.

Bagwell talked about hiring his parents to take care of his money because he needed help, and his parents found Happenin Cats. Colt joked that he was a personal friend of Judy Bagwell, who Bagwell called “the Warrior”. Judy Bagwell joined Buff Bagwell on the road because she heard he was a mad man, but when she found out it wasn’t true, she started getting him heat by calling out other people who were showing up late, before becoming a tag team champion. Colt asked about Bagwell’s tag teams through the years. Bagwell mentioned his partners 2 Cold Scorpio, The Patriot, Scotty Riggs, and Scott Norton, as Vicious and Delicious. Bagwell pushed for the American Males team, and briefly mentioned the NWO getting over and making WCW realize that baby faces can have goatees and earrings. Bagwell plugged his movie “The Good, the Bad, and the Buff” and his social media before exiting.

20:39 – Second Guest: Bill Apter – Apter came on stage and joked that his father is dating Womantaur and talked about taking photos of Mantaur, just not with the fan’s mother. Colt asked who Apter took photos for in Texas. Apter said that he took so many pictures of the Von Erich family that they almost adopted him. Colt joked that it was a good thing he didn’t get into that family. Apter talked about the Von Erich ranch, where he once had dinner. Apter joked that they ate using the iron claw and talked about the popularity of the Von Erich family. Apter mentioned Fritz Von Erich wrestling as a Nazi early in his career, but the whole family became massively popular in Israel. Apter speculated that Kerry Von Erich would have been the WWE World Heavyweight champion, Kevin would have also been in WWE, David would have been a great star, and Mike and Chris would probably not have been as successful as wrestlers.

Apter said he started photographing wrestling matches when he snuck into matches in New York and said that he once got vomited on by Road Warrior Hawk during a match. Apter asked Colt if he did any wrestling imitations. DeRosa did a Kevin Von Erich impression and Apter did a Terry Funk impression. DeRosa did a Colt Cabana impression and Apter did a one word Gordon Solie impression. Apter plugged his book and Twitter before exiting.

31:38 – Third Guest: Matt Striker – Matt Striker started off by saying he has a funny story, which Colt asked for prior to the show. An unnamed legend told Striker he was doing great work, but called him “Josh,” thinking he was Josh Mathews. Striker talked about Vampiro saying things on Lucha Underground that have to get edited. Striker asked if Colt does any impersonations, since Apter was trying to get Colt to do some, and then Striker did a bad Donald Trump impression, followed by a passable Bernie Sanders impression. Colt asked who Striker would elect president of professional wrestling, to which he jokingly answered Vince McMahon, and they riffed on how McMahon would be as a president.

Colt asked if Striker applies his teaching strategies to wrestling. Striker said he tries to teach people however they learn, rather than forcing them to learn his way. Striker said he may go back to teaching, but he’s doing what he loves so he isn’t going back anytime soon. Striker plugged his social media, credited Colt for starting the wrestling podcasting scene, and exited.

38:26 – Fourth Guest: Court Bauer – After a few moments looking for a guest that left that Colt referred to as “Schmustin Schmoberts,”Court Bauer came to the stage with a “weird, giant, Mexican Coke.” Colt mentioned Bauer starting MLW and writing for WWE. Bauer briefly went into his history with the Wild Samoans and doing work with MMA. Colt asked what Afa’s email is, and they joked about Vince McMahon having a Gmail account, some of his quirks, and firing people just for looking funny. Bauer was on WWE creative for three years, and left around the time of the Chris Benoit incident because McMahon wanted the writers to do damage control.

Bauer spoke about an angle when Stephanie McMahon was pregnant when Vince McMahon wanted to be revealed as the father and some other aborted angles involving the Hart family and Ric Flair’s retirement. Bauer plugged his podcast with Konnan, whom he met on LinkedIn, and he plugged his social media before exiting.

49:24 – Fifth Guest: Justin Roberts – Colt announced Justin Roberts as one of the best announcers ever, and DeRosa joked about him being on the Mount Rushmore of announcers and a heckling experience Roberts had at Wrestlecon. Colt asked if Roberts was approached by fans, and Roberts said that people were much more hesitant approaching wrestlers, treating him like a friend and handler of the wrestlers. Roberts discussed the way he pronounced John Cena’s name during his introduction, until Vince decided he didn’t like it. Roberts said he would say Cena’s name really low key and slowly build up to a much longer pronunciation over the next few weeks.

DeRosa asked if Roberts ever forgot someone’s name, and, due to the nature of Raw, he would occasionally forget someone’s name or where they were billed from, including one time when it happened introducing the Undertaker. Roberts pugged his social media and forthcoming book and exited the stage.

58:03 – Sixth Guest: Steve Corino – DeRosa joked that Corino was dressed up and looked like the “mayor of Dallas.” Corino talked about his recent spinal fusion surgery after years of wear and tear on his back. Colt asked about Corino’s time in ECW contributing to his injuries. Corino called ECW a different time, because you were a wimp if you put your hands up to take a chair shot to the head. Corino said Balls Mahoney was the hardest hitter in ECW and on his first PPV match, Balls told him he was going to give him the hardest chair shot ever.

1:07:04 – Colt wraps up the show – Colt thanked all of his guests and talked about his next live show at Wrestlecon. Colt thanked his fans, his tech help and sponsors and ended the show.

9.0: – Live episodes of the Art of Wrestling are usually very entertaining, and this was no exception. Colt thrives in the live environment, and all of the wrestlers are more relaxed and willing to tell humorous stories. Marty DeRosa definitely assisted, making sure not to hog the spotlight, but chiming in with funny bits to liven the mood and keep the wrestlers at ease. One minor complaint is that the audio isn’t as high quality as the one-on-one interviews, but that’s to be expected when the show is taped in front of a live audience. All of the guests this week were phenomenal and made this a great episode to listen to, and I would recommend it to anyone. 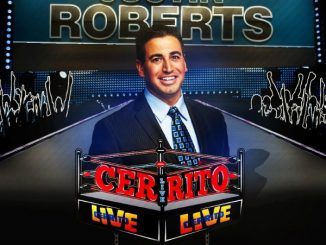 NEWS: Justin Roberts Reveals Why WWE Should NOT Fire JBL, which member of management is the most “insecure” person he’s ever met