Recap of Swoggle on In Your Head Wrestling Radio, 03/28/2017
by Vic Schiavone

– The WeeLC Match with El Torito at Extreme Rules 2014: Was this your proudest moment in wrestling?

“I did a lot of things in WWE that I am very proud of, but WeeLC is easily the top thing I ever did in WWE. We were in New Jersey, and it’s the second hardest crowd to win over behind Chicago (when it comes to WWE crowds)…They should have hated the match: two midgets fighting with mini tables and mini ladders and mini chairs and a mini referee and just stupidness, and they should have booed it out of the building. A minute in, we had the people on their feet. It was the biggest moment for me, especially when I got to the back, to have everyone greet us with a standing ovation. Michael Hayes, Road Dogg, Vince, everyone greeted us with a standing ovation when we got to the back. I looked at Torito, and I said, “Man, we did it.” And I knew we did. It was one of those…you know, it’s funny, you hear about Shawn and Razor coming back after WrestleMania 10 and saying, “Follow that.” And it was the only time I ever kind of thought that because I knew we hit a home run. It was put on the Pre-Show, and it was taken as a joke, and we still hit a home run. When I see Ziggler and Kofi meet me in the back, and they say “Damn, you did great,” that was awesome. It means a lot to me; easily the best match I ever performed in in WWE.”

– His memories of his last match in the WWE.

“So, WeeLC is the proudest moment in my WWE career. The second proudest is actually the last match I ever was in…SmackDown was in Green Bay, and I asked Road Dogg…”Hey, my son and my dad are coming tonight; could I please have a dark match?” He said absolutely, let’s make it happen…So I go to the building; I had my son with me…he would always love to get in the ring before the shows. He wanted to be in the ring and just bounce around and hit the ropes, and wrestle with me in the ring for about five minutes during the day.

So we did that and we were walking around, and Dolph Ziggler goes, “Hey, bud, you have a dark match tonight… you bringing him in the ring?’ as he points to my son…I go no, no, he’s going to sit with my dad. Ziggler goes, you need to. I go, no, I’m not doing that…family life and career; wrestling are completely separate for me; they’re completely two different things…Later in the day, it’s showtime, my son is sitting front row with my dad.

I do the match, I end up winning in my hometown, I’m waving to one half of the crowd as I’m about to leave, and I turn around and my son is in the ring. And we meet eyes and he walks up and he gives me a hug. And he goes, “You did great, Dad, I’m proud of you.” And it was the most proud moment of my career to have my son in the ring in my hometown in front of my family and just hugging me and telling me how proud he is of me…So, I get to the back, and Ziggler is back there…and he’s clapping and he’s nodding his head…Word is he talked to the producers and to Security, to find my son to get him in the ring that night. And it’s one of those things where I’ll always be indebted to Dolph for doing that because it was the most special night of my career…I never knew that three months later I would be released, and that would be my last match in WWE. And in reality there’s no better way to go out than in front of your hometown and your family and friends and hugging your son in the middle of the ring. There’s no better than that.”

– You have said that the Ultimate Warrior was your inspiration for getting into wrestling. Did you have any interaction with Warrior the night he was inducted in the WWE Hall of Fame?

“I asked to be at the Hall of Fame, and originally I was supposed to do Access…At the last minute, they had Torito and I do a random run-in during the Hall of Fame for some crazy reason, but that meant that I would at least be at the Hall of Fame for Warrior’s induction. As soon as he was inducted, I ran to the back so I could meet him. I remember him walking from the stage to the back, and me waiting for him, and introducing myself and saying, “Hey, you’re the reason I got into this business. You’re who I looked up to. I never had any heroes in life, whether it be Superman or Batman; I didn’t care about them I cared about you, and you were the reason that I got into this.” And he called his wife over, Dana, and he told her that, what I said to him. He asked me, “Hey, can we take a picture together?”…We took a photo together, and the next day he passed away, which was crazy. I never got to meet him in my life, and then the day before he passed away I got to meet him, and get my photo with him. And then the painter, Rob Schamberger, the WWE artist, unbeknownst to me, a few weeks after he passed away, I get home and there is a package at my door. And I open it, and it’s a framed picture painted of Warrior and I. I had no idea of it; I had no idea that he did it. I texted him and said you didn’t have to do this, and he goes, no, I know I didn’t, but I knew it would mean a lot to you. It was really really cool for him to do.”

– Will we be seeing him in any leaked videos?

– Who are his best friends in the wrestling business?

– What were his thoughts on the Anonymous RAW General Manager angle and his
involvement in it?

Swoggle will be appearing at WaterCity WrestleCon on Saturday, April 22nd in Oshkosh, Wisconsin, as part of a great card that includes Bret “the Hitman” Hart, Vickie Guerrero, Mr. Kennedy, Carlito, and El Torito. For additional information, go to www.acwwisconsin.com .

This interview is available for listening at
http://www.inyourheadonline.com/viewnews.php?autoid=31974

QUICK QUOTES: Sean Mooney on his personal experiences with Hulk Hogan, how he got into the business, his podcast with Jim Duggan 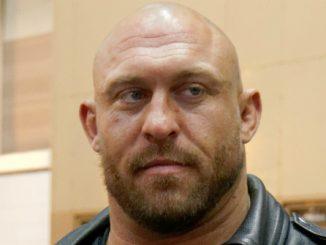 NEWS: Dana Warrior claims Ryback did NOT have a match scheduled with The Ultimate Warrior at WrestleMania 30