Johnny Mundo was a recent guest on the Lucha Lowdown podcast and talked about Randy Orton’s recent tweets, the return of Lucha Underground, and more. Here are some of the highlights they sent along:

“I think it’s a good critique of Indy Wrestling, especially from Randy’s point of view, but I don’t feel that way at all. I feel ultimately wrestling is for the people, for the fans. I’m a fan of wrestling, I always have been, and a lot of the stuff I have jumped out of my chair for recently and been excited about throughout my career was fast paced, hard hitting, high flying action. I also got really excited for stories and invested in characters. Punching my buddies in the shoulder when Undertaker’s music hit and he was walking towards the ring. Same thing with HBK, and Hogan. There is room for all of it, although (laughter) for some reason knowing Randy it just feels like a lot of people are taking that tweet really seriously. (laughter)”

“Who knows if someone pissed on his cornflakes some morning, and he was watching some Indy wrestling and felt like putting something out there, good. I think the more of that stuff the better. Opinions are great, especially in wrestling, because it gives people something to talk about, and debate about.”

On waiting for Lucha Underground Season 3 to return:

“It’s been a little bit of a bummer. I feel really good about the 2nd half of season 3. It’s some of the best wrestling I’ve done in my career. When we come back it’s me vs Willie Mack in an all night long match which I’m really proud of, and I can’t wait for it to be on TV. I am ready for Lucha to come back already, and I think a lot of people are too. So when it gets back I am going to be really excited. ”

On the impact he sees Lucha Underground being on Netflix having:

“Well, I have already felt it. More and more I am getting Lucha Underground chants and Johnny Mundo chants…The amount of people watching Lucha Underground has multiplied because of Netflix, and that’s great…More people means expanding the Temple possibly…going on a live tour…a number of things, and the coolest thing is the number of people watching on Netflix is so much that all that stuff is going to happen faster.”

On Pentagon and Fenix’s leaving AAA not affecting their status in Lucha Underground:

“As far as will it effect Fenix and Pentagon on Lucha Underground? No. The decision is going to be theirs whether or not they want to wrestle on Lucha Underground. I saw both of them not too long ago, and they are both excited about Lucha Underground…They are ready to come back, and hopefully it remains that way. I am a big fan of both of those guys, and I feel like they are a big part of the show, and it would really hurt to lose those guys.”

How making an entertaining movie is similar to wrestling:

“It seems so similar to what wrestling is. To pop the crowd. To make people like it. Dr Dre. said one time what inspired him to make music: he wanted to pop the crowd, and I think that’s a really good motivation for making entertainment because ultimately Isn’t that what we are supposed to be doing, entertaining people?”

For the full interview, check out the Lucha Lowdown podcast.

WRITTEN PODCAST RECAP: X-Pac 1,2,360 w/ Jeff Cobb on the unsung heroes of Lucha Underground, the ramifications of punching through glass in a match, whether he’d ever go to WWE (Ep. 39) 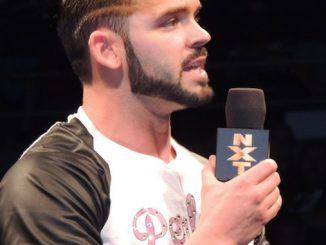 QUICK QUOTES: Tye Dillinger on the four Smackdown wrestlers he wants to face, the Perfect 10 gimmick being “make or break”