Fox Sports recently interviewed Goldust after he turned heel on R-Truth. He talked (largely in character) about the breakup, Jinder Mahal’s big win, and more. Here are the highlights:

“Well, I’m a family man, so I go home to my family. He went home to his family. We didn’t ride together. I drive by myself, I like it that way. I’m kind of a lone-wolf type of person. Goldust is a singular character. I don’t need to be put with anybody.

At first, when we had the Golden Truth, it was fun – but it was always in the back of my head that I’m destined for so much more. I can be so much better than this, than the old comedy act that they want me to be. Hey, here we are, so we’ll see what happens today.”

His thoughts on Mahal’s win:

And to see Jinder… you know, I didn’t know. Nobody knew. The way they did it, I’m very happy for Jinder, because he left and he came back and he busted his ass and he trained hard and he has probably the best physique here in WWE. He looks great, has a great attitude, and is a genuinely good human being, and I couldn’t be happier for him. Congratulations to Jinder Mahal.

Anything can happen. You never say never in our company, and that proved the point last night. It was just a month ago or two months ago that he was in eight-man tags with us. He was in that comedy-style eight-man tag match that we’ve had for the last year, and now he’s world champion. That goes to say something. He’s worked his ass off and had the attitude that every performer needs to have when they try to get into this company… He is proof of something good happening.

You know, the brass ring that everybody talks about, which everybody makes fun of, it was there last night for Jinder Mahal, and he grabbed it.”

If we’ll be seeing more of a old-school Goldust now:

“The old-school Goldust is in the past. The past is history, tomorrow’s a mystery, you know. I’ve got today…I don’t know. I’ve got to evolve my character. I’m constantly trying to think of ways to evolve it, because basically I’m just in a suit and I have paint on my face, so what can I do to change up the look and keep it fresh in people’s minds? That was one way. It was very cool, I got some good feedback on it. Won’t do it too much, because then you get tired of it.”

For the full interview with Goldust, check out Fox Sports.

WRITTEN PODCAST RECAP: Something To Wrestle With Bruce Prichard on No Way Out 2003: Bringing Goldberg into WWE, setting the stage for WrestleMania XIX, how the wrong one-legged wrestler got hired (Ep. 88) 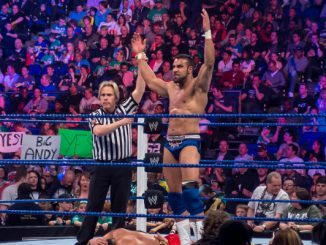 QUICK QUOTES: Jinder Mahal reveals his childhood wrestling hero, paying dues in the business, being “hesitant” over the 3MB