While Taz was working as a commentator on SmackDown, Vince McMahon apparently approached him with the idea of taking on Brock Lesnar at Madison Square Garden. This news was revealed on The Taz Show (transcription via WrestleZone):

“I’m over there doing the commentary for the WWE at the SmackDown table several years ago. And Brock was just cooking up before, and basically, they were really building Brock up as this killing heel machine. This was before this whole Suplex City thing they have going on. And I was, I don’t know what year this was, could have been 2006 or something like that. Somewhere in that world, 2007, something like that.

I’m sitting there with Cole, and he’s writing stuff up, and Vince walks by, he’s just watching and checking on some of the people who are working out. He was talking to some of the agents, they were doing a rehearsal or something. So Vince slips over to my area, at the announce desk, and he’s like, ‘Hey, uh, can we talk for a minute?’ [And I thought I was going to be fired]. So I walk over there in the corner with Vince, and he goes, ‘Listen. This is big. You ready?’ I’m like, ‘Yeah. I’m ready. What’s up?’

“He goes, ‘You and Lesnar do something at the [Madison Square] Garden. It’d be great. You would come back, do a match at the Garden, we’ll plug it, push it.’ I go, ‘Vince. No thank you. I love Brock, I love you, and I love the company, but I can’t do it. I’m banged up, I got a lot of numbers to my body. I’m just, physically, I’d be too risky for me to do.’”

For more of the interview, check out Wrestlezone and The Taz Show.

(Soucek’s Analysis: I’m guessing Taz meant 2003-2004? Brock was gone from Apr. 2004 to Apr. 2012. It’s hard to imagine Vince offering Brock a huge money offer to come back and battle Taz. I could be wrong on that. Still, it would have been an intriguing match-up and a downright fascinating one when both men were in their prime.)

WRITTEN PODCAST RECAP: E&C Pod of Awesomeness w/ Randy Orton on why he wants to be like Kevin Owens, his memorable feud with Christian, giving back to the business (Ep. 27) 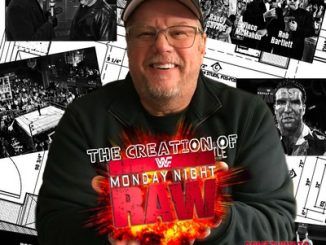