On the most recent episode of The Triple Threat Podcast, Shane Douglas gave his thoughts on the upcoming Great Balls of Fire pay-per-view. Here are some of the highlights they sent along:

Did WWE jump the gun with Brock Lesnar vs. Samoa Joe at Great Balls of Fire:

“Hold on a second (laughing). You can’t feed me a question like that and say, ‘by the way it is called Great Balls of Fire.’ That is a sh*tty name. That is the sh*ttiest name ever (Vince) for a pay-per-view, it sucks. Great Balls of Fire, what’s next? “Smoke Gets In Your Eyes”, “My Prayer” there are a bunch from the ’50s. How about “Heartbreak Hotel” that could be a good one for the next month. Good God, Vince has lost his mind.”

Samoa Joe in the Main Event for a WWE Pay-Per-View:

“I’ve always been a huge mark for Samoa Joe. He certainly looks like he is getting in better shape and is credible enough to stand in the ring with Brock. I don’t know if with the WWE fans yet, have they gotten him over in the WWE fans minds. At least to the same degree that I know Samoa Joe, or you guys know Samoa Joe but if so than that should be a program that they could work around the loop for the next year or two. That is the question. I haven’t seen anybody that (using Steve Austin’s euphemism) Vince has strapped a rocket to their ass in a longtime there and I don’t think he’s done it to Samoa Joe. With that said, I’ve known Samoa Joe from working with him in TNA and I was a mark for him then, I’ve been a mark for him now and his work and I’d love to see what they can let him do. The question is how will Brock pan out. But for him, Samoa Joe is a legit opponent who can go and if done properly they could draw money with that. But that is a great big asterisk on if done properly.”

Should WWE have waited for SummerSlam to have the match:

“They should definitely have dumped gasoline on it and the problem is that they’ve got nothing else. What do you put on top of the next pay-per-view being “Great Balls of Fire” because I can’t even say that without laughing. They need to do something and there are rare instances where you can initiate a great storyline off an initial match and Joe certainly has the goods to do that. It will be if Brock is eager to work with him and with Paul Heyman being involved it certainly won’t hurt it. Obviously, a great mouth piece, a great mind so they can continue to initiate a great storyline. Again it is a great big asterisk of if they do it and I hope they do. Joe and Brock could be some damn compelling programming.”

For the full interview with Shane Douglas, check out The Two Man Power Trip of Wrestling podcast. 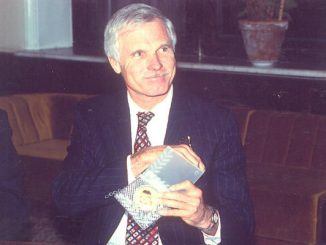 QUICK QUOTES: JJ Dillon on the planting of the seeds of the Monday Night War