On the most recent episode of MVP’s VIP Lounge, he talked about working with Fake Kane, the actual Kane, Undertaker, and Chris Benoit. Here are some of the highlights:

“When I got signed, I had to report to Deep South, which was 45 minutes from downtown Atlanta. I met (Luke Gallows), and he looks a lot older than he really is. He played football, he shaved his head, and when he let his hair grow back, there was none on top. So, at twenty-something, he had the old man receding hairline back to the base of his skull kinda thing. I remember thinking to myself ‘oh, how cool. They gave this old guy a shot. One last shot, huh?’, then I find out he’s like 21 or 22 or whatever. He and I became real cool; the definition of a good brother. That dude is one of the most awesome people you’ll ever meet and he loves wrestling more than more than anybody I know. WWE, he went through a few gimmicks, he left, worked the indies, went to Japan, went into the history books there, now he’s back in WWE with Karl Anderson. That dude is awesome.”

“They had private practice sessions where (Gallows) would practice doing Kane’s s**t. I remember Bill DeMott working with him to get down Kane’s timing, his pacing, his movement. They would call in a few guys to take bumps for him and help him develop his Fake Kane. I was one of the guys they called in. You know how Kane does that underhand jab to the side of the face? Gallows would throw that s**t and the mental image of Daffy Duck and his bill spinning around his head a few times comes to mind, because he would do that and it was like ‘g***amn, that s**t was in there, if you will.’ We would all laugh about it, but his s**t was snug as f**k with that Kane shot to the jaw. He would put on the gear and do the whole thing and when he finally made his debut and did his deal, I could not have been happier for him because he’s such a good guy and he did the work. But when he was hitting me with those shots, he had been up there and he had worked with them a little bit, so I was like ‘ok, I guess that’s just how they do it (in WWE). I guess s**t is just laid in like that. It’s just rough.”

Feuding with the real Kane:

“So Kane was my very first feud and the very first time Kane hit me with that underhand slap to the jaw, I got my teeth clinched and I’m ready for that shot and I’m like ‘Hey, ok, well maybe he just missed or maybe that one was a little light.’ That was one of his featured shots and I was married to him for months and months and months. He never hurt me. Not once. Ever. Never rattled my jaw, never caught me with a shot that was a little too stiff. Never nothing. Nada. And I remember thinking to myself ‘Boy, you wait till I get back down to Deep South. I’m going to go cuss that guy out.”

“I’ll never forget when I got called up and one afternoon, Vince calls me over, he’s standing near the ring post outside the ring and he says ‘Ok, here’s the deal. I’m putting you with Glenn so that you can learn how to work. If you can’t learn from him…’ and he just gives me the shoulder shrug and turns his head sideways. ‘Got it, boss.’ Aside from being one of the most intelligent guys in the locker room by far and away, he was extremely patient and didn’t mind taking the time to explain to me why I should not have done this or that and where my mistakes were. He took the time to help nurture me, and he taught me volumes. So being with Mr. Kennedy, tagging against the Brothers of Destruction every night on the main event of Smackdown for international tours all over the world. You talk about going to MIT, I’m in there with Kane and Taker. And Glenn was such an awesome teacher because he cared and he took time to educate me.

“We used to have so much fun. I remember we came up with this thing, a fun spot we would do on house shows. We called it the Indiana Jones spot. I would get fed up with him manhandling me and I would fire up on him and I would do all this big s**t and do a jumping spin kick and then he would just give me that big right hand and I would just take a bump like I was knocked out. When the guy brings out the sword and Indiana Jones pulls out the gun and shoots him. We would do that spot. Man, we would have such a blast. I remember Jimmy Korderas was the ref the first time we did it, and the reaction we got from the crowd, I would do my shadow boxing combo to the air jumping spin kick and land and he would give me that right hand and I would take the bump and he would just stand there. Korderas would look at me and Glenn, they’d look at each other and both do the shoulder shrug like ‘I think he’s out’ and the crowd would pop huge. They thought it was great.

“Once we finished up with the Brothers of Destruction, my next feud was Benoit. I have to say my time with Kane and Taker did a lot to prepare me for my feud with Chris Benoit. Taker pulled me aside one day and said ‘listen, I have it on good authority your next feud is with Benoit. He’s go two speeds – hard and harder. So every night, blow yourself up with us, get in the best f**king shape you can because with Benoit, you’re going to have to go, son. That’s when you’re going to find out what you’re made of. And I’m like, here’s Taker, who I’ve had to do 25 minutes with on house shows. ‘Don’t be so self-deprecating, because you’re no f**king cake walk to do 25 minutes with either.”

“Kane, I can see why a lot of people would feel that he’s one of their favorite opponents. I remember he and I had a match one night and he had come back from an upper respiratory infection or something and I asked him ‘hey man are you alright?’ He’s like ‘I’m not 100% yet, but you know, we’ll figure it out.” And I’m like “Well, listen man. I’m out there for you. Whatever you need.’ The pacing was good; the timing was good. Professionally speaking, I took care of him, as you’re supposed to. We came back through the curtain and Michael Hayes was just f**king singing all the praise on Kane, how awesome he was and what a good job he did. Glenn points at me and goes ‘hey Michael, uh, MVP was instrumental in making that happen. He did a great job. Michael, this guy’s good.’ And Michael’s all ‘ah, hell, well I wouldn’t say that. Don’t go getting that head all big. I can’t give him any compliment cause that would make me look weak.’ That was one of the first moments where, to me, professional wrestling royalty, somebody who’s a first ballot hall of famer and a legend went and said, in an official setting ‘this guy’s good.’ So I will forever be appreciative and grateful to Glenn Jacobs for the time we spent together and for him being so patient with me and giving so freely of his time and knowledge.”

For the full interview, check out the VIP Lounge.

WRITTEN PODCAST RECAP: Something to Wrestle with (Classic) – The Ultimate Warrior: Behind the scenes look at his career, the original plans for WrestleMania XII, Sheik Tugboat, the origins of the blue steel cages! (Ep. 4) 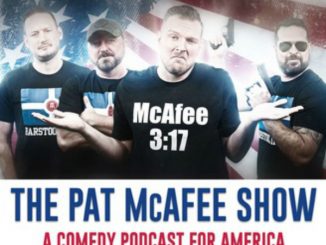