-The litany of workers Lombardi welcomed into the WWE and his relationships with them (Steamboat, Rock, etc.)

-Tenryu being the stiffest person he ever worked

-Ultimate Warrior personally thanking Brawler, shortly before his death, for being the only one not to bad mouth him on the WWE Warrior DVD

-The rare W’s he picked up over the years over Jinder Mahal, Triple H, Ultimate Warrior, etc

Jim starts the show by thanking his sponsors and does a sell for DDPyoga.com/jimross. Jim references the stories of individuals who have had their lives changed by DDP Yoga. He plugs the app and upcoming live dates for DDP Yoga.

Jim’s intro element then begins to play and he welcomes listeners to the latest episode. JR has a first time guest on for the show and it is the Brooklyn Brawler, Steve Lombardi. Jim regards Lombardi as a future hall of famer. Brooklyn Brawler had one of John Cena’s first matches in WWE and also welcomed The Rock in. Brawler had Owen and Bret’s first matches in the WWE as well. JR then T’s up his segment “What’s on JR’s Mind”….

(6:01) Jim Ross begins to talk about the Mae Young Classic. JR heaps praise on all of the competitors in the tournament. He  spoke of how he enjoyed watching these performers and also enjoyed working alongside Lita on commentary. Jim addresses some criticisms levied at the commentary and feels bad that Amy got caught up in that. He then begins talking about JBL leaving his commentary position. JR speaks highly of JBL and Bradshaw’s future endeavors all while giving props to Corey Graves.

Jim segued to the news of Ric Flair’s recovery. He spoke about doing an interview for the Nature Boy’s upcoming 30 for 30 feature. JR touched on the upcoming No Mercy event and seems on board with Strowman’s build leading into the headlining match against Lesnar. He’s looking at doing a Ringside with Jim Ross shown in Southern California in October.

(21:50) “Attack Each Day” Podcast Ad….The Harbaughs podcast on podcast one

(22:37) Jim directs listeners to an anonymous survey so they can offer feedback on his show. JR then gets into the conversation with Brooklyn Brawler. Brawler says he’s making a ton of cash now and has an audio book now called Brawler Unfiltered. From his birth in Brooklyn to the present day, it chronicles the many wild escapades of Steve Lombardi.

The audio book contains unheard behind-the-scenes stories from 30 plus years with WWE. Steve talks about how he embraces the term jobber because he was aware that his role was to make top talent look good.

Brawler and JR both agree that the three hour format for current WWE TV is too long. Steve then begins to talk about his new promotion UCW in Michigan. Brawler has a financial backer for his new promotion. He has plans to secure a building in October to train future talent and to run shows out of there. The booking style will be in more of an ‘80s vein. Jerry Lawler, Eric Bischoff, and Vickie Guerrero have all been featured in Brawler’s burgeoning territory.

Keeping the ego at the door is something Steve wants to impart on his trainees. Brawler sees a big issue in the modern indie scene with guys who aren’t willing to do jobs. Steve talked about welcoming in Mark Henry as well as Ricky “The Dragon” Steamboat. Steve and Jim then bonded about how they both beat Triple H. Steve also quipped about how he tapped out Jinder Mahal to a Boston Crab years ago.

Steve never kept track of his losses but remembered going over on Ultimate Warrior at one point. Brawler spoke about how he’s appreciative of all his opportunities and how blessed he has been. JR discussed how they had high hopes for The Rock when he was coming in for his debut. Jim told Brawler that the company wanted The Rock’s debut opponent to be trustworthy, someone who could guide Rock down the right path and they chose Brooklyn Brawler as that man. Steve then discussed seeing Nation of Domination backstage cutting promos and noticing a certain spark with Dwayne as compared to the other members.

Steve discussed the importance of purposeful inflection and cadence. JR and Brawler talked about the importance of staying the course and the sacrifice that accompanies the long journey of becoming a complete performer.

(51:28) JR mentions subscribing to his show, then the talk between Brooklyn Brawler and JR resumes. Steve and JR talk about the competitive drive of some of the bigger stars. In the midst of this talk, Brawler mentions he would’ve loved to hear JR call Brock in the UFC.

JR introduces the topic of wrestling managers and heaps praise on Paul Heyman. Jim was wondering about Brawler’s take on the all time greatest manager, as well as if he had any advice he could impart on would-be managers. Brawler showed respect to Bobby the Brain Heenan as the greatest but said he would acquire Heyman’s services if he was an upcoming talent today. Both men see managers as important but not everyone needs a manager. They also spoke on the fact that just because a talent is with a hot manager, that doesn’t mean the talent is guaranteed to get over.

Brawler and JR then began to talk about Pat Patterson and the intuition he had for giving people something special. Brawler touched on the art of pacing and building up a show in the ‘80s with squashes building up to a main event of consequence.

Steve talked about working Tenryu in Japan and then working with him in North America. Genichiro Tenryu was a stiff worker and Brawler discussed how there was potatoes thrown from both parties. The two then discussed “ribbing on the square;” a term referring to when guys would do something duplicitous but give themselves an out by saying “Oh I was just kidding.”

JR asked about what Brawler’s relationship with Jim Hellwig was like. Brawler talked about how Warrior knocked him out a couple of times through a stretch where they worked each other 40 times. Despite this, Lombardi described the friendship that the two had and outlined a story where Warrior helped out when Steve’s car broke down. Brawler then talked about how he wrote the content for his audio book by hand on a notepad. It was Eric Bischoff who convinced him to turn the writing into an audio book after hearing Steve read it.

Jim brought the conversation back to Brawler’s experiences with the Ultimate Warrior. Brawler mentioned how Warrior appreciated that Steve was the only one who didn’t knock him on WWE’s Ultimate Warrior smear DVD. JR and Brawler also briefly touched on Mae Young’s toughness as well as her desire to have a wrestling match with Stephanie McMahon. Brawler and JR then wrap up their talk.

(1:18:19) Jim Ross begins to wrap up the show and how Brawler kayfabed him on his big stories. JR sells “Brawler Unfiltered” and speaks to the longevity of Lombardi in WWE. JR sells his upcoming Boston show with Jeremy Borash being the emcee. Jim Ross then covers basic housekeeping announcements in relation to his merch opportunities and how you can support his efforts. JR teases his guest next week, Celeste Bonin who was known as Kaitlyn in WWE. Jim closes out the latest episode with some football talk and says his final goodbyes.

Review (7 out of 10): I found this to be quite informative and funny, as well. Brooklyn Brawler has such an intriguing perspective on the wrestling business. Having worked for WWE for over three decades, Lombardi was privy to many of wrestling’s most seminal moments. From giving key advice to a super green Rock to welcoming in Ricky “The Dragon” Steamboat to WWF, Brawler has seen and done it all. An oft-underappreciated individual who kept evolving in a business that has perpetual framework shifts. The cartoonish ‘80s, the Attitude Era, and right up until the reality era. Brawler is a quality storyteller while Jim’s interview skills shine through.

For more, check out out archive of The Ross Report. 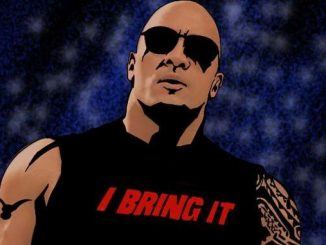 QUICK QUOTES: The Rock reveals why he missed WrestleMania this year, doing improv on Baywatch

RECAP AND REVIEW: The Ross Report with Tessa Blanchard on working with W.O.W., how long she’s under contract to Impact, being a stunt double for Paige, J.R. on the worst segment he’s ever seen Paul Heyman in