-Jim not seeing Ronda Rousey as a regular WWE performer going forward, but he can see her appear in a big one-off.

-Kaitlyn’s tight-knit friendship with AJ Lee that lead to her best in-ring work.

-Bonin being displaced from her home due to Hurricane Irma and how she’s adapting.

-Kaitlyn’s adjustment period of becoming fully confident and comfortable with her physique/ presentation.

-Kaitlyn loving performing in the ring but not necessarily anticipating a comeback to WWE.

-Getting the call from Johnny Ace to come to NXT and how he gave her he Kaitlyn moniker.

-Kaitlyn’s appreciation for Fit Finlay’s work with the women backstage and the opportunities he gave her specifically.

Jim does an ad for Fan Duel (fantasy fooball betting site) and then goes into his intro element. Jim begins to discuss his guest Kaitlyn (Celeste Bonin) and her post-WWE endeavours. Celeste is an entrepreneur who has some products on the go. She also hosts a podcast. Jim then sells the multiple platforms his podcast is on. Kaitlyn has been seeking refuge from Hurricane Irma and this was part of Jim’s conversation with Bonin.

(4:15) “What’s on JR’s Mind” intro plays and JR talks about the Mae Young Classic final. Ross touches on the interview process with the tournament’s talent pool and how well he connected with all of them.

Jim thinks if Ronda Rousey comes to WWE, it would be in an appearance capacity. JR doesn’t think Ronda will become a member of the active roster as some are theorizing in the internet wrestling community. Jim speaks highly of Baszler and her chances of becoming a member of WWE’s roster.

JR talks about enjoying working with Josh Barnett (Baszler’s trainer) on commentary for NJPW on AXS TV. He then sells an upcoming indie card with Sting, Gail Kim, and a host of other name talent. Imperial Wrestling Revolution is returning Saturday, October 7th in Ardmore, Oklahoma. Jim continues house keeping announcements and updates listeners on where you can catch him next.

(19:53) Interview with Celeste Bonin aka Kaitlyn

JR immediately mentions Kaitlyn’s situation with Hurricane Irma. Bonin discussed sleeping on a  few cushions and being ousted from her home along with loved ones. Kaitlyn was displaced from her home, and during the interview was seeking a temporary respite in a Miami courthouse. Celeste also talks about her ties to Hurricane Harvey and how some people close to her were devastated. Jim plugs Kailyn’s social media handles and Bonin lets listeners know where she can be found. Celestial Bodiez seems to be her main business endeavour she’s focusing her energies on.

Celestial Bodiez is centered on body positivity and was what Bonin really dove into post-WWE. She also does Facebook live podcasts and podcasts that focus on building brands for others, girl power centric and creating a support network among women in male dominated industries (ie/ pro wrestling).

Jim and Kaitlyn riff about not letting negativity into your life, if you can help it, and the journey of constant learning in life. Bonin then talks about her efforts in the fitness industry. She discusses galvanizing her efforts on social media sites and growing her company primarily from there.

(42:45) JR mentions some of ways listeners can help JR by engaging with his show.

(43:43) Back to the interview with Celeste Bonin. Jim asks if Kaitlyn would ever come back to WWE after four years away. Bonin gets into loving the physical act of wrestling and interacting with the fans but she feels good about how things ended. Celeste felt like her run with AJ and Eve was gratifying.

In her mind, it felt like the right time to move on to that next step in life. Kaitlyn has a bit of a never say never attitude but is committed to her business efforts. JR and Celeste both appreciated the tight knit bonds that are formed in the frenetically paced wrestling industry. Kaitlyn says no feeling is quite like being emotionally invested into a match or program that you’re involved in.

Ross asked about how Kailyn got her name and Celeste mentioned a call to NXT she got from Johnny Ace. John Laurinaitis’ call was somewhat disconcerting because Bonin was just learning the basics of pro wrestling; a broke tomboy who was bartending and going to school while trying to pick up the basics of the craft. Bonin was worried about not having proper attire but the company forwarded her money to get some gear. Third season of NXT and first all women season of the show was where Celeste was seen on a large scale. She felt a certain pressure from others, as she was coming in to a huge opportunity with such little experience.

Celeste didn’t know her name until the day she debuted. Laurinaitis told her this news. She had no gimmick, no moves, no awareness of being a babyface or heel but things worked out. Bonin believed it was the best thing for her as it gave her this nothing to lose attitude. Vickie Guerrero’s being her mentor on the show and her monster heel status helped Kaitlyn become a babyface. Bonin explained how Vickie treating her poorly on TV garnered sympathy for Kaitlyn’s character with the audience.

Celeste still keeps in touch with some NXT/ WWE luminaries like Big E and Natty. Things segue to discussing Kaitlyn’s presentation and the more muscular look she had. Bonin talks dropping significant weight to the point where it bordered on being an eating disorder. There was a preoccupation with getting a leaner look.

Finlay came back to the promotion at a key time and began putting her back into matches. This played a big role in establishing more comfort for Kaitlyn. It resulted in more fluid performances and also finally finding a confidence in the way she looked. Celeste felt she found a healthy medium in her look between a bulky and lean musculature.

JR asks about what makes Finlay such an asset for WWE’s women wrestlers. “The Diva whisperer” was a moniker that the women gave to Fit. He could connect on an emotional level with the female performers. According to Bonin, most backstage agents and producers were averse to working with women and certain politics they could bring. She described Fit as a good communicator who was sensitive and helpful. Kaitlyn describes accidently winning a battle royal on Raw. Eve couldn’t maintain balance and propelled over the top ropes after an errant clothesline. Eve asked Kaitlyn to lay in another clothesline harder and that resulted in the accidental elimination. Fit allowed Kaitlyn to go out last in that battle royal against Eve, which set Kailyn on a run in WWE.

Kaitlyn described winning the title in her hometown as one of the coolest days of her life. JR touches on the Sexy Star/ Rosemary situation and asks Kaitlyn’s thoughts on it. Bonin sees it as a betrayal of someone who gives their body to you in good faith. Celeste has noticed certains situations of people being frustrated in a storyline/ their own career and they take it out on competitors in the ring.

JR goes to fan questions. The Ross Report fanbase wants to know about Kaitlyn’s connection with AJ Lee. Kaitlyn had her first match, best match, and last match with AJ. Bonin’s award winning Payback match with AJ went seven minutes over. No one was reprimanded backstage after the fact due to the quality of the match. The culmination of that storyline resulted in tears of joy for Kaitlyn at the crescendo of the narrative between the two. AJ and Kaitlyn would give a heads up to the other prior to matches saying that they would lay in strikes. The trust existed between them, though, and there was a unified desire to make the in-ring action look tight.

JR and Kaitlyn then discussed the adrenaline dumps in pro wrestling. The supreme highs of performing and the commensurate lows that can come post-show. Bonin touched on how she can’t watch Total Divas because it doesn’t spotlight some key behind the scenes aspects of being a WWE performer. Kaitlyn mentioned how cool Maryse was to her with how much support she regularly shows to her company. JR touches on how much Maryse brings to Miz’s overall presentation.

(1:25:58) Outro from the interview into JR’s show wrap up. JR ruminates on the rampant tragedy caused by natural disasters as of late. Jim speaks at length about the resiliency of his nation and how we should all band together at this time in solidarity. JR sets up his guest next week and that is Gregory Helms aka The Hurricane. Jim mentions some upcoming live dates he has, plus his Pro Wrestling Tees store, and covers some more basic housekeeping before the Podcast One outro elements play.

Review (6.5 out of 10): I thought Kaitlyn provided some unique insights all throughout. With Bonin jumping into NXT with so little experience, she had to basically learn on the job. I also found the conversation about unconventional body types to be interesting. There seems to be more variety nowadays but Kaitlyn’s muscular physique was fairly uncommon during her tenure. The personal and working relationship Kaitlyn had with AJ was also intriguing to hear. JR’s wealth of knowledge within the business lead to some interesting questions as the talk went on.

For more, check out last week’s recap of The Ross Report with The Brooklyn Brawler. 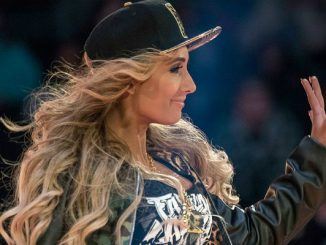 QUICK QUOTES: Carmella on joining the cast of Total Divas, the Mae Young Classic, her relationship with Big Cass