“I’ll always remember the dressing room when we were on the road. You had Andre the Giant in one corner playing cards with Arnold Skaaland. You’d have Honky Tonk tuning his guitar, Jake Roberts with Damien, the Bulldogs feeding Matilda, Mr. Fuji playing tricks on people, and, in the middle of it all, there was Bobby Heenan keeping the whole dressing room laughing with his one-liners.

“Bobby left something that’s going to be remembered forever. I can’t wait to see the video package they air on Raw on the life and times of Bobby. People are going to see how good this guy really was.”

Regarding Bobby’s skills as a mouthpiece to get fans to turn on the long-beloved Andre the Giant in 1987, Bruce Prichard offered the following:

“That would have been tough for anyone else, but not for Bobby Heenan. You’d just tell Bobby, ‘Hey, this is where we need to go,’ and then Bobby would get you there. He knew how to get heat on his people, but didn’t steal the heat from them. Bobby was the perfect talent.

“The first time I really got to know Bobby was when I worked for Vince. I was just a kid, and they threw me in to produce Bobby and Gino [Gorilla]. I usually produced the shows he was on, which was easy to do because he was just so damn good.

“We became fast friends. We traveled together, we hung out together. We were in Stamford, Connecticut one night having dinner, and Bobby was making me laugh throughout the entire meal. The waitress walked over to us, looked at the both of us, pointed at me and asked Bobby, ‘Is that your son?’ From that point on, Bobby was ‘Dad’ and I was ‘Son’.

“Bobby called his wife, Cyndi, later that night and said, ‘Honey, we’ve got another child.’ Cyndi asked if he’d gotten another woman pregnant, and Bobby said, ‘No! It’s Bruce!’

“The last time I got to sit down and talk with him was in Houston when I introduced him to my daughter, Amber, who was 17. His reaction to meeting my daughter was almost like he was meeting his granddaughter. That was the relationship we had. He’d make me laugh so hard I’d cry. I loved him to death.”

For the full article by Justin Barrasso, visit Sports Illustrated. 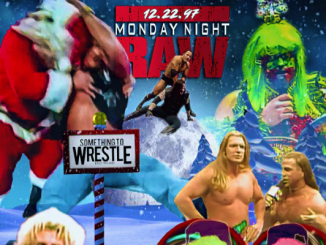 RECAP AND REVIEW: Something to Wrestle on December 22, 1997 RAW – the future tag team champ who sat on Santa’s lap, the wrestler who may have faked being in an auto accident, why Undertaker was missing shows, the best Christmas present Bruce ever bought Vince McMahon

QUICK QUOTES: Eli Drake on what he expects from DeAngelo Williams, Jeff Jarrett’s return, Slammiversary being a “rebirth” for the company