Rosemary was the guest this week on Killing the Town with Storm & Cyrus. It was her first media appearance since being intentionally injured by Sexy Star at Triplemania XXV in August.

She discussed, at length, her experience that day, from the scene in the locker room prior to the match, to the incident itself, and the aftermath:

“From my perspective, and what I can tell was happening, and keep in mind I don’t speak Spanish beyond ‘Bueno’ and ‘Si’ (laughs). I can say ‘Yes’, ‘Good’, and ‘Beer,’ oh and ‘Toilet.’ The essentials. But what I could tell is there was some sort of struggle going on between the other three girls as they were trying to put the match together, and I could tell there was animosity, there was a lot of eye-rolling happening and a lot of very active hand movements. I could tell there was a struggle putting things together. Like they would kind of (blah, blah, blah) and then they would come back and they would walk through it with me in broken English and stuff would change so often and it was like ‘What’s going on here?’

“There was at one point, in the back, they were just very clearly all fighting with each other and I just left the room, so I’m like ‘I don’t know what you’re saying anyway, so I’m not going to be able to contribute anything productive to this. Like maybe you guys can just talk it out?’ I went out and I remember I going over to DJZ and Andrew Everett and I’m like ‘they’re just fighting in there and I don’t know what to do about it,’ and they’re like ‘oh, um, good luck with that.’

“So because of that and knowing of that feeling with the other three, I remember being out there in the ring and trying to follow what was happening, but they were literally fighting with each other in the ring and as we learned afterward, there was an actual fight going on between two of them. Me, I’m out there going ‘I’m not going to get involved in this, I’m just going to stand here by the ropes and wait for an opportunity to get this back on track… ok, there’s an opening, let’s see if I can coax them into going to this spot.’

“It got to the point where the finishing sequence was meant to be between me and Sexy Star after the other two girls were put out of commission in the match. It’s going fine, everything between the two of us is going the way it was supposed to be, so I’m like ‘ok, we’re fine, we’re just going to the finish, cool.’ So I do the bump off the top and I give her my arm for the armbar and for whatever the reason, what I believe happened is that because emotions were running high and things got carried away and I really don’t believe I was a target ever. I just believe things got carried away between the other three and maybe she was more worked up than she should’ve been. Maybe she torqued harder than she should have. All I know is I felt my elbow pop, then I felt myself panic and immediately started trying to get the f**k out of there, and she wouldn’t let go. That’s when I got angry.

“To me, it was just a really frustrating incident, and what was more frustrating afterward was we did a group phone call between all of us and I basically gave the opportunity, exactly what I said, where I didn’t believe I was the intended target, I believe things just got carried away. I basically laid that on the platter to be like ‘Just say “Yes, that’s what happened” and say “I did what I shouldn’t have and I’m sorry for it”’ and she continued to play the victim card and I was like ‘Alright, we’re done here.’

“I just believe in accountability, you know. If you f**k up, you f**k up. Just admit it and we’ll move on. I get it. Sometimes emotions run high. I would’ve been way less angry if she would’ve just admitted it rather than lied.”

She then takes us through exactly how the incident went down:

“I think (I tapped out) right before because I remember I was going to sell it a little bit longer. I was going to try and break the hold, then I felt her hips pop up. I have really flexible joints, thank god, so what ended up happening was I got a bicep and tricep strain. I was worried my tricep had partially torn because there was a severely sore spot and it was causing numbness down in my fingertips. The trainer assessed it, went through a whole bunch of tests with it and said it was just a really bad strain.

“As soon as I felt her hips go, I’m like ‘No, no, no,’ and you can see me immediately tap and I reach up trying to grab my other hand to lessen the pressure on it. Then she went back to it and I was like ‘What are you doing? Why is this happening right now?’

“I was just, like, super angry. I remember lying there after she did release it, on the apron before I rolled out. Just angry. I literally had, like, two options there. ‘I can leave right now and just go to the back and deal with it there, or I can get up and kick her in the head right now.’ I’m literally trying to debate this. I was like ‘Let’s not go to Mexico jail.’

“So I walked to the back and I reported what happened and I was obviously fuming about it. I got back to our actual locker room and it was already on the dirt sheets. I’m like ‘I can’t even deal with this internally now because it’s already public.’ This is not something I’ve ever dealt with before. It was probably the most overwhelming thing I’ve had to deal with at this point. It’s just, ‘This is not how I want people to know who I am, this is not how I wanted this to happen.’ It had to be dealt with so publicly because it already was public.”

Rush’s Analysis: Rosemary comes across in this interview as extremely down to earth and likable. She talked about exchanging tapes of Raw and Nitro with her friend in school as a way to keep up with the Monday Night Wars, discussed her rugby career, and also training with Scott d’Amore and joining TNA. This show is always worth the listen and the Rosemary interview really put it over the top.

Killing the Town is available at PodcastOne. 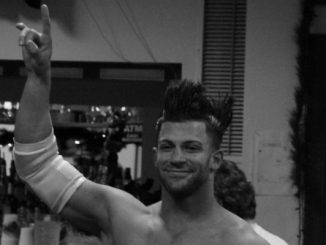 QUICK QUOTES: Robbie E on why he’s been off of TV, changes the new management team has brought to GFW, Rosemary and Sexy Star

WRITTEN PODCAST RECAP: Colt Cabana’s “The Art of Wrestling” w/ Trevor Lee on being homeless for four years, the Hardys wrestling in his backyard, the match that got him noticed (#356)

WRITTEN PODCAST RECAP: Colt Cabana’s “The Art of Wrestling” w/ DJZ on his scary injury in Mexico, why he was stranded in Japan for weeks, Impact Wrestling (#359)