X-Pac is joined by Jimbo, Denise, Bill and TK and guest Aneesa Bar is sitting in with them as well. There won’t be any interview guest this week. It will be a news discussion and a Curt Hennig Memorial show.

It is the 15th anniversary of the death of Mr. Perfect. Pac remembers getting the news that they found Hennig in his hotel room. Pac says the news was devastating – especially given the frame of mind that he was in back then. He says the grieving process is so messed up when you’re “methed” out. He was in such bad shape that he didn’t even make it to Hennig’s funeral. Pac was such a mess that he said it would have been a distraction.

Pac thinks about Curt all of the time. There are things that pop up that remind Pac and his friends of Curt. Curt’s lucky number is 14 and it popped up all the time with him. There are a lot of crazy stories that Pac can tell involving Curt. He remembers one time on a road trip to Nevada, Curt and Pac were gambling at a casino. They were playing high-risk slots and Curt hit a jackpot on the machine he was playing. The machine ran out of money and while he was waiting for the workers to bring out the rest of his payout, Curt put $5 into the machine next to it and he hit the jackpot on that one too. Those are the kinds of things that happened around Curt all of the time. X-Pac says that he really misses Curt.

Good for her. She’s the first GLOW girl in the HOF. With the resurgence in popularity of GLOW, X-Pac remembers that Ivory was the franchise of that show. She was one of the only girls that had any previous experience. Ivory always flew under that radar and never had any problems. X-Pac loved her work with the Right to Censor. Ivory was one of the workhorses of the women’s division at the time and probably the best overall performer in the division. X-Pac says he has previously made negative comments about Ivory in a shoot interview he did during a time when he wasn’t sober. He says he wishes he could take those comments back. Sometimes you can project the problems that you have with yourself onto other people. What we see the women doing now in the ring are a credit to the work that Ivory was doing in her time.

We haven’t seen Ziggler in seven weeks. Apparently Ziggler got more money and a contract where he can leave when he’s done wrestling. He also has the opportunity to do other appearances that don’t conflict with his wrestling dates. The clause that is in Ziggler’s contract that states that Dolph can leave the arena before the show is over made X-Pac chuckle.

There was a blanket statement rule made in the WWE that nobody could leave until the show was over. This was put into effect because everybody was leaving early – including the guys that should have been sticking around to try and improve themselves. X-Pac says that he sees Dolph’s point of view because Dolph probably doesn’t NEED to be there but it doesn’t necessarily look all that great to the rest of the guys on the roster. You would think that the guys that aren’t in the main event would want to watch to see what the main eventers are doing different. With Dolph saying that he was unhappy with what he has been doing in WWE X-Pac doubts that anything that was put in this new one that will make him happy because creative satisfaction can’t be guaranteed in a contract. Hearing Dolph saying these things and then seeing him resigns makes X-Pac think that they made him an offer that he couldn’t turn down right now.

It would also make sense that there is possible hesitation in regards to the indie wrestling scene because he was never really in it. He came up through OVW and WWE developmental. X-Pac says that’s totally different from the indies and can understand the indie scene seeming foreign to Dolph. There is also a feeling within WWE that it would be better to sign him and keep from going anywhere else. There is also value in keeping him as a gatekeeper to help get the younger guys over. Guys like Rick Martel or Tito Santana. X-Pac is a fan of Ziggler personally and professionally and wishes him the best.

A wrestling show gets a new location and a new set

Lucha Underground has moved into Downtown L.A. into a new temple location after the events at the end of Lucha Underground Season 3. It will be interesting to see how the roster shakes up based on the comings and goings of a lot of the wrestlers that were on the roster. The set was a big part of the show as well so it will be interesting to see how things like vignettes are affected by switching locations. X-Pac says that Lucha Underground reached out and asked if he wanted to be an in-ring part of the show. Pac was interested even though the talks never progressed to the money stages. The fact that he’s under a Legends Contract with WWE threw a monkey wrench into the deal though from L.U.’s perspective. X-Pac asked HHH if there would be any heat if Pac worked with them and HHH said no, but be careful because their contracts can be very restrictive. Lucha Underground ended up backing out though.

It turns out that two WWE personalities are NOT beefing

Corey Graves went on to Booker T’s podcast to clear the air and let everyone know that it was all a work. X-Pac doesn’t understand why people were so upset about being worked. It’s so hard to do these days so when you are worked just enjoy it for what it is. A lot of it was the wrestling journalists that got upset about looking foolish for buying into it. X-Pac did know that there would be no chance of any physicality between the two of those guys – which kind of clued him into it being a work.

Another UFC Fighter may go up against Mayweather

There have been minor talks about Mayweather maybe stepping into the octagon. Joe Rogan said on his podcast that he thought Mayweather vs. CM Punk would be a good matchup because of the experience levels. X-Pac thinks it makes good sense. It would be a huge matchup in terms of talking people into the building. X-Pac also said that he heard that Mayweather’s payout from the McGregor fight wasn’t as much as had been reported once Showtime took their money. There is a possibility that Mayweather needs some more cash and that’s why he would consider doing something like this.

Since leaving Lucha Underground Rey Mysterio has popped up all over the place in the wrestling world. In terms of special appearances, nobody moved the needle more than Rey did at the Royal Rumble. The social media hits were huge. The difference between Rousey and Rey’s YouTube hits were really drastic. Rey looks great and has a really good new look in terms of ring gear.

This show was a solid discussion on the current news items of the week. I loved hearing the Mr. Perfect story at the beginning of the show. X-Pac said that at one point they do plan on doing a more in-depth Mr. Perfect episode and I am really looking forward to that. I found the discussion on the Ziggler contract situation to be particularly interesting because I can’t imagine why he would have wanted to stay with WWE. In my opinion he would be a top draw on the indie scene right now and the opportunity for him to make money is never better. WWE must have made him quite a large offer for him to stay. My ears perked up when X-Pac said that Lucha Underground had reached out to him. I am obviously a fan of X-Pac and would like to be able to see his in-ring work more easily and on more of a consistent basis. I’m a little disappointed that nothing ever came of it. There weren’t any major developments or anything this week but I enjoy listening to their wrestling discussions so this was a solid entry.

Sean is a media professional from Milwaukee, Wisconsin. Sean’s earliest memory of wrestling is seeing Kane on WWF television in 1998. Sean watched primarily WWF in the Attitude Era and dropped off just before the initial brand split. Seeing recap promos of the Undertaker building up to WrestleMania 20, he became hooked and has been an avid fan ever since. Sean’s wrestling preferences currently lean more towards NJPW/ROH/NXT but he remains a fan of it all. In his spare time Sean enjoys cooking, baking, and going to the gym.  You can follow Sean via Twitter @stmcgraw and Instagram @stmcgraw09.

PODCAST RECAP AND REVIEW: X-Pac 1,2,360 with Shawn Michaels and Rory Karpf on the biggest challenges while making the Ric Flair documentary, a scene that was cut from the movie, HBK on working with Kevin Nash and Sid, his role in NXT, why his retirement match was against Undertaker (Ep. 74) 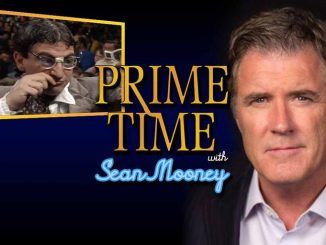 32 things we learned about Jamison on Prime Time with Sean Mooney – how Vince discovered him, why Pat Patterson “despised” him, why he left the WWF and much more.