Talk is Jericho – All In with Cody and The Young Bucks

8:30 – Cody and The Young Bucks on Jushin Thunder Liger

Cody says, “I broke my family’s unspoken rule with Liger. I got his autograph backstage. The rule was no pictures, no autographs, don’t bother any of the guys backstage.

“He was like, getting ready to walk to the ring. He had no clue who I was, and he was super sweet.”

The Young Bucks say that if you have a match with Liger that Liger is happy with, he’ll buy you a drink out of a vending machine backstage.

19:50 – Chris Jericho on Vince McMahon’s All In advice

Jericho says, “I told Vince about All In about 4 or 5 months ago. I told him the show is in September in Chicago. Vince says, ‘Ugh, I wish they would have called me! September is the worst time of the year to promote!”

Similarly, Cody says Ring of Honor’s Carey Silkin told him that they shouldn’t start All In ticket sales on a Sunday, and that they should have a ticket pre-sale period as well.

Cody says that during Ring of Honor’s War of the Worlds Tour, he noticed the electricity in the room when the Bullet Club would get in the ring to close out the show. Cody says it became a huge confidence booster, and he began asking why they weren’t betting on themselves and taking a risk on a larger venue.

Cody says, “If Ring of Honor’s not comfortable putting that money up, or New Japan isn’t comfortable, if we don’t have an investor, who gives a damn? We’re doing pretty well. Why don’t we just put our money in together and live forever? Take a shot.

“When we did ‘The Invasion’ Being the Elite, that was another example. We crowd sourced that group in 30 minutes, and we’ve got a thousand people.”

Cody says, “when they film backstage at Ring of Honor, people kind of roll their eyes. Chuckle. You’re telling people ‘hold on’ – you’re filming with your phone. Now I’ve noticed when that phone comes out, either they’re doing that pretend learning or they’re (trying to get in the shot).”

“He didn’t even say anything mean, and I just said, ‘I’ll take that bet.’”

The Young Bucks say, “We were planning it anyway. It was fuel to the fire. We knew we were doing a big show. I think we’re the only three guys who have the balls to try it.”

34:42- Cody and The Young Bucks on financing All In, Cracker Barrell & Hot Topic

Jericho asks if they knew they wanted to finance All In by themselves, and Cody says, “That was the main part of the decision. Asking around places, like, ‘Hey, are you interested in sponsoring…?’ We have no experience. I’m one of the most selfish people on earth.”

The Young Bucks say, “When we announced we were going to do a show, we had offers like crazy, with them actually saying they wanted to pay for everything.”

Cody says, “We turned a few blue chips down. You’ll notice there are tons of people you’ll see associated (with All In). When you see the ring skirts, you’ll be like, ‘What?!’ We didn’t take any money. They’re helping us with other things. One of the big friends of being the Elite is Cracker Barrel.”

The Young Bucks say, “You want to know how that happened? We took pictures in front of their restaurants. We tagged them. They followed me on Twitter, and a relationship grew out of that. I talk to the people who represent them regularly. They offered a ton of stuff. They’re going to cater the whole event.

40:20 – Cody and The Young Bucks on choosing the date and location for All In

The Young Bucks say they considered holding All In in Ontario, California and San Francisco instead of Chicago. Cody says they ended up going through New Japan and ROH’s calendars with Rocky Romero and realized that Labor Day weekend and July 7th were the only dates available, and they thought July 7th was too soon.

43:00 – Cody and The Young Bucks on ROH and NJPW supporting All In.

Cody also says New Japan offered their blessing as well as talent for the show.

46:50 – Cody and Jericho on Jericho getting punched by Big Show

Jericho remembers that, after Big Show was sent to boxing camp, it was decided that Big Show would start using a knockout punch as his finishing move. Jericho says he told Big Show to punch him in his forehead as hard as he could.

Jericho says, “I ran into it, and he hit me hard. It was a killer. He leveled me, to the point where there was a first mark.

“Vince came to me and said, ‘You’re the toughest son of a bitch I’ve ever met in my life!’”

Matt Jackson says, “that would be so hard for me and Nick. We’re DIY from the ground up. We’ve made every decision on our own and we’ve built ourselves up to this empire on our own. It would be like, how could I hand over the keys to this car to someone else at the point?

“Everybody (in WWE) eventually wants to be where we’re at currently, and we did it without having to go there. Because eventually, they want to call their own shots, have fun. That’s where we’re at.”

Cody says that his sister Teil suggested the name All In. The Young Bucks say they immediately loved the name and thought it would be perfect for promoting the show, because talent would be able to say they’re All In.

The Young Bucks call the All In press conference disastrous, and say everything went wrong. They say the microphones weren’t working and cameras were getting the wrong shots.

Cody and The Young Bucks describe traveling from the All In press conference to the Ring of Honor show as All In tickets started to go on sale. Cody, Matt & Nick were each in separate cars. They were all monitoring ticket sales with the event box office and on Twitter, and were told that they’d sold 3,000 tickets in the first 10 minutes. Matt and Nick say they realized they had sold out by the time they got to the ROH show, but Cody says he didn’t accept they’d sold out of All In tickets until 6 p.m. that evening.

Cody says after speaking to fans who had purchased All In tickets at an autograph signing that evening, he finally accepted that they had sold out. He says, “I left the signing, and I broke down in tears in the room behind. I couldn’t handle it. I denied it, denied it, denied it.”

Cody says, “We got offered a bunch of stage-style shows talking about All In, and we turned them down. The idea of us talking about ‘we did this, we did this’ – nothing is real until we do it and it happens. We can’t plan anything beyond where we’re at. I sent (The Young Bucks) my goals the other day. I want to get a movie and do a trilogy.”

Matt says, “If we do another one, it has to be in the same ambitious spirit…I personally would like to do something in Madison Square Garden or do something in Los Angeles.”

You should definitely listen to this podcast to get you hyped up for All In. For a fun story about a fist fight between Chris Jericho and Eddie Guerrero at a Minneapolis-area Denny’s (featuring a not-so-nice shout out to our lord and savior, Wade Keller), skip to 46:20.

WRITTEN PODCAST RECAP: Talk is Jericho w/ Dick “The Destroyer” Beyer on wrestling Rikidozan, getting stabbed with a beer can opener, drinking with Andre the Giant, wrestling nearly 11,000 matches 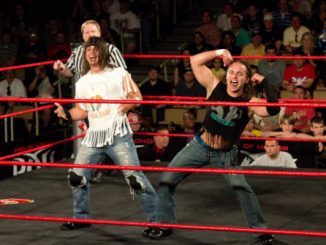 QUICK QUOTES: The Young Bucks and Kenny Omega on why they don’t mind not being able to do the Too Sweet hand signal anymore, Omega vs. Chris Jericho at Wrestle Kingdom