From New York, Sam welcome you to the show!

Sam calls him one of the most hated men in wrestling commentary. Let’s find out why, and let’s find out what Josh Matthews has been up to since he left WWE.

“I think there was a combination of so many different things. If I were being honest at this point, I think I can be honest at this point. I was upset that I didn’t have my home any longer after being there for over a decade and didn’t really know how to go through those emotions. So, my initial reaction was that ‘I’m the best. What a huge mistake.’ And then it became a storyline, right? And then we went through the match at Slammiversary. Looking back it’s probably not the way I would’ve handled it now. But I feel like I had to go through all of that. I’m in such a different place than when I first started with Impact and my relationship with WWE ended. I’m so happy with where my life is now. Looking back I probably shouldn’t have said, ‘I’m the greatest wrestling commentator of all time.’ Probably shouldn’t have been so defiant. I would’ve handled it differently had I knew in a few years, you’re going to meet the love of your life, have a great family, and have all these things that you didn’t even know existed, and have my life change so much.”

“The funny thing is how much I took for granted or didn’t really appreciate the work that had been done and had been paved, “Hey, we are gonna have a couple shows in Chicago and I bet this thing sells out in a day. We went on sale for Homecoming Monday and I get an email every time a ticket gets sold and I get so excited trying to fill that building. But to give everything of yourself to try to help someone grow, for how many years did I walk in and it’s like, ‘Okay we’re sold out.’ There are thousands of people in this building and you don’t truly appreciate it unless you’re doing the work. I want to go back and thank Vince McMahon, and I can’t imagine how many hours and the time he gave up to build the empire he built, and to now be in another company and try to do anywhere close to that from marketing, for entertainment, and all we do, is a lot of work.”

“The other day I was watching something and I sent a message to Sonjay (commentary and creative), ‘Yo, this dude Bandino is amazing.’ He was like, ‘What are you watching?’ I caught myself looking at YouTube videos of this guy who I found compelling.”

(He is pretty good.)

“My official title is VP of Digital Content, which when I signed that deal that’s really what I was doing. And that’s every digital platform, that’s Facebook, Youtube, Instagram, Twitter, handling all of them. And as the company has grown working with Anthem, others have come in and taken some of those roles. I morphed into marketing… The only department I don’t touch is creative.”

“Backstage Interview has got to be the worst job in the world because you sit around all day to hold a microphone and say, ‘What are your thoughts?’ then blankly stare off after they walk away.”

“It’s a catch-22. We are putting tickets on sale for a show and I wish you could only see Pentagon or Phoenix or Sammy at Impact. It makes things a little easier. And that’s why WWE gets to do what they do, they have that luxury, but it’s so hard.’They were just working for MLW last week so they were already in New York.’ That’s where it gets a little tricky.”

“I have to say this with a caveat. I am the first person that knows ratings. And I send them to everyone on Friday at exactly 4:45 when it comes out on Showbuzz Daily. And I’m refreshing all day until they put the top 150 out. And the Thanksgiving numbers were delayed until today, and I was on there early at 8:30 waiting, and we did a 1.24 which is up from the previous week. But with that said, with next week we’ll do a 1.02, so you can’t predict that number. And for us, because it’s that number, that’s like if two people don’t watch the show that week. It’s going to affect it enormously, so with that caveat being said it’s not that important because the plus three, the plus five, the plus seven, the President of POP TV Brad Schwartz said he wishes he could get a plus 30, which they obviously don’t do, but if you can look at the plus seven numbers and the weekend numbers especially for a show that’s on Thursday that speaks more to who is watching the show obviously than your overnights, but I think we are stuck in that weird Monday Night Wars world where it’s such a big deal but it’s not really.

(Josh is still answering this question.)

“The overnight is not a huge deal, but we all look for, wait for, and discuss ratings. When we got over 500,000 this year the debate was raging on as to how we did it, and again, being so close to these things now I know right now the numbers aren’t going to be great. In March and April and May the numbers are going to be super inflated, because it’s WrestleMania season and the numbers will be inflated across the board for wrestling, and not only TV ratings for digital numbers for April and May are going to amaze people, if you came on in April or May, ‘Oh God, look at how great this is!’ And then the summer comes around and you’re like, ‘What’s happening?’ You have to look at it like it’s a rollercoaster. Those months are going to be up and the Summer months are going to go down.”

(I typed this out and yet I have no idea what Josh just said. He is speaking in riddles, riddles wrapped in enigmas, and then spoken in Swahili. Or maybe I’m just dumb.)

Frustrated or Happy for TNA Graduates:

“I think it’s being happy for their success. How can you not be happy for someone like A.J. Styles? I see A.J. from time to time at the airport and we always spend a few minutes talking to each other. EY (Eric Young) is another great dude. When I lived in Nashville he was super cool and friendly and invited me to games. These are guys that have been around for a long time, Samoa Joe, who was always nice to me, and they go off and they are there now, and they are having the success that they are having.”

Sam tells us this interview has lessons hidden inside. One of them is that life is long and you never know what can happen.

“Until the last day on this planet you are playing a hand, so never stop playing it,” Sam says. (FACTS!)

(The other lesson is don’t ask Josh to explain TV ratings.)

Katie Linendoll is back. (Yay!)

Sam enjoyed the show, which he admits was basically a house show. He wondered if it was disrespectful to call it Starrcade because of the NWA/WCW history that came attached to it. Should it have been treated bigger? Sam was a WWF/WWE guy so he really has no problem with it.

Katie wonders if the show should have been played up as a legendary PPV or just play it like another house show. Sam, again, does not really seem to have a dog in this fight, but he likes the idea of a Starrcade PPV for the Network.

Sam thinks WWE will somehow convince UFC to allow Brock to bring the WWE title into the octagon. Katie is doubtful that Dana will really allow Brock to do this. Her argument makes a lot of sense.

Sam confesses he really wants Brock to beat Daniel and walk into a WWE ring with the UFC Title, and he feels it could actually happen. (Brock is not beating DC.)

Katie says that it would be even better if Brock won the Cruiserweight Title too.

Sam wants to know if he should go to SDL or Raw. Katie is more concerned with who he looks like. She says Lars looks like Baron Corbin’s uncle.

They debate this for a bit until Sam goes back to his original question. He says, “Lars is being described as the hottest free agent.”

Sam then asks Katie where Lars should go. She says 205 is the way to play this out.

Ignoring that, Sam feels that having Lars go to Raw could hurt him because they already have a monster in Braun. He says SDL has monsters but they are more psychological, like Samoa Joe and Randy Orton.

Sam’s vote is that he goes to Raw. He thinks Lars should debut by destroying No Way Jose then moving on to Rollins.

After some deep thought, Katie decides Lars is the love child of Issac Yankem and Mayor Kane.

First, he criticizes SDL for no selling the Survivor Series sweep. Beyond that, he thinks SDL is a great cohesive show that is doing great by seamlessly mixing character and storyline.

He loves this new Danial Bryan.

He loves the Usos being used more in the tag team division.

And he loves Asuka.

Who does he love the most? Becky Lynch. He says, “She is in reach at being the biggest superstar in WWE. She is the athlete people are talking about.”

Katie is surprised, yet pleased by Becky’s prominence, although she suspects Ronda Rousey is still the bigger star.

“Becky is the stand out on both shows,” Sam counters.

Katie disagrees, she thinks Charlotte is just as big, if not bigger, than Becky. Sam reassures her that she is wrong. Katie wants to know what planet Sam is on right now, and if he is on bath salts. Sam stands his ground. And so does Katie.

Sam and Katie do some fantasy booking with the latest episode, which you should listen to, it’s pretty good. Hit the link at the top it starts at 1:47:00.

Josh is a really smart guy, but his long answer about TV ratings made me irrationally angry. The video below helped to quell my anger.

Thank the good Lord, that The State of Wrestling segment was so good. It was great to see Katie back and she made it fun for all. Katie and Sam have Booker and Brad level chemistry.

Based out of New York, James Hayes is an independent filmmaker and podcaster, currently working on a true crime series focused on African American crime. When he needs a break from the seriousness of true crime he turns to pro wrestling. James has 27 years of following the sport. Here is a link to his film credits https://www.imdb.com/name/nm2026980/, as well as his Twitter @JamesHa34395813. 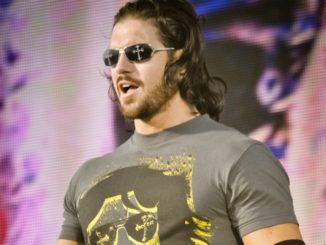 QUICK QUOTES: Johnny Mundo’s thoughts on Randy Orton’s tweets, the return of Lucha Underground, what impact Netflix is having on the promotion