-Sad story. Wednesday announced “Mean” Gene Okerlund paased away at 76 years old. Will be missed. He was The Everyman. He was memorialized by interviews with Hulk Hogan and Andre the Giant. Mean Gene had a great personality and extremely quick witted. Was still on the WWE Network with reality specials. Type in Ultimate Warrior promos to see a great straight face as Warrior is sprouting some kind of nonsense.

-Raw (12/28) taping at 7:30pm at Little Caesars Arena. Doc missed the show because a worker couldn’t get her stuff in. She ended up finishing 2 hours late. Doc had Section F1 Row 1 seats on the aisle that Seth Rollins had given one of his friends. He is still pissed about it.

-Brutal Cage Match with Drew and Dolph turns out very good. Drew dismantles Dolph with two Claymore kicks and a pin. Hits him with two more Claymores. It was an awesome blow off match for their feud.

-Seth and Triple H come out for a promo. Triple H says no more automatic rematches and that you must fight your way back to the top. This is setting up Seth to be the “Face of Raw” in Doc’s opinion. Roman isn’t around right now, so WWE is going with Seth. He has the mantle, but the massive disappointment with his program with Dean has made it shaky. EC3 and Lars Sullivan are coming with the possibility of A.J. Styles.

-Battle Royal was solid. Apollo eliminates eight stars, leaves everyone scratching their heads with his win. What about Finn Balor? Doc believes WWE is telling everyone to take their chance. Apollo character needed a reset and given a chance. Apollo let everyone down on the mic. He was a plain Jane. Doc figured Dean was winning just on that which he did with a dirty deeds. It was just a decent match.

-Seth and Lashley was just an ok match. Seth became frustrated and hit Lio with a chair and when Lashley came over then was DQ’d by hitting him with chair also. Lashley needs a fresh start.

-Nia and Tamina are awful. Nattie and Ronda were lucky to pull a decent match from them.

-It was a solid Raw that investing back into characters. Doc still can’t believe he missed it.

-Smackdown started with a super long promo that was funny by the New Day.

-While cutting a promo Shinsuke sneak attacked Rusev. Lana got involved and it is the start of their feud.

-John Cena comes out and is outstanding on mic by begging for a match. Becky Lynch’s music hits. Both went back and forth on the mic. Becky has been one of few wrestlers not to struggle on the mic with Cena. Vega and Almas come out to take them on. Fun match used purely to get Becky over. Cena went for cover and Becky throws him out of the ring as a heel move. Vega tries to roll Becky up, but instead Becky kicks out into Disarmer. Awesome finish.

-Fatal 5 Way-A.J. is extremely aggressive demeanor. He hits a 450 Splash off the side of ring. It is A.J. v Daniel Bryan at Rumble. It could be a match of the ages.

-Which was better? Smackdown was better, but because Raw was so bad for so long he rated them very close. Smackdown can move faster for 2 hours, whereas Raw needs filler matches due to 3 hours.

Unbiased Match of Week: Drew/Dolph in a cage was awesome.

All Elite Wrestling with Tony Khan, Cody Rhodes and Young Bucks is legitimate thing. They need a TV deal and a current big star pitched like A.J. Styles showing up the Monday after WrestleMania or Dolph Ziggler given free reign like Jericho. Cody didn’t want to go back to WWE. Success of All In showed him this could be done. Fans will be first. Double or Nothing will be first event. Jay White is new leader of Bullet Club.

Basically just talking about what happened on both shows.They give a rating like good or decent to matches. Very little analysis until the end about AEW. Quick show though. Would recommend to get the basics.

RECAP AND REVIEW: Heated Conversations with Booker T with Baron Corbin on what it’s like to be Raw GM, Vince McMahon’s reaction to his work, thoughts on social media and angry fans, the reception of former NFL players in WWE 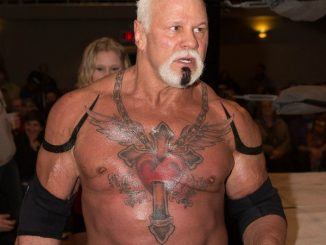