655: Why is Dean Ambrose Losing As He Exits WWE?

-Dean Ambrose interrupted a Moment of Bliss segment while she was sitting down with EC3. Nia Jax came out then Dean came out. He told Nia to stay out of his business. Then we saw Dean punking out EC3 on the mic. It is weird since Ambrose knows he is putting the guy over later in a match. It makes him look bad not to know the guy then lose to him. This is not good for Dean.

-Taz says he wants to see how WWE evolves with Dean Ambrose in the next one to two shows. Taz is thinking now that it is a shoot that Dean Ambrose is leaving in April. WWE didn’t advertise him for Raw and he is doing a straight job to EC3 who WWE doesn’t know where they are putting him either on Raw or Smackdown. EC3 is on the come up.

-Taz was shown some comments on the WWE Twitter page by some enraged fans. They were saying, “Oh my God, they are going to make Dean job out because he’s on the way out. This is a shame. WWE don’t treat him like this.” Taz asks, are these people crazy? Do you really think the WWE is going to have Dean Ambrose look good going out the door?

-That’s called doing the honors. It’s good business. You job because you are leaving on your terms. There is nothing in the contract saying that he wins all the time. Slim chance that it might be a work, but Taz says he is thinking it is real. He’s leaving. Taz says he is teaching everyone for free about the business. It doesn’t matter what you think. They are trying to get others over by using the Dean Ambrose brand to make others look good.

Otis and Tucker are losing their last names because WWE wants to be able to brand them successfully and not have wrestlers using long and hard to spell real names. WWE wants to own their name rights too. Big E tweeted to them…Welcome to the club. It makes signing autographs easier and quicker.

WWE needs to be careful with her. Ronda is getting pissed off and frustrated about the live audiences booing her. The fans aren’t putting her over and Ronda is showing her emotions too much by getting angry. She is yelling at the audience. That’s a bad thing to do especially when you aren’t a heel. You can’t do that. Someone needs to take control and say you can’t do that. Ronda is losing her cool too easily to be a killing machine. She then basically cut another heel promo when Becky was suspended and leaving. The fans love Becky, so don’t, as a babyface, be walking up to her and say how Becky screwed up everything with their match.

Taz is worried about Becky. He thinks WWE will push her too hard and the fans will turn on that push. Just like Roman Reigns and Ronda Rousey. Becky has earned her push and Taz says she deserves it by paying her dues. Becky has a great attitude.

Taz thinks Becky had a really good segment with Stephanie because of Stephanie. He loves the story of the injured left knee of Becky. Becky won’t see the company doctor, so that makes Stephanie have to suspend her. Stephanie made the angle great by being a real trooper and letting Becky rough her up. It started running a little long especially when Ronda got into Becky’s face afterwards as Becky was leaving.

The stuff with Triple H and Becky was really good. Becky has had two HUGE nights. She beat up verbally and physically on Triple H and Stephanie. Taz enjoyed Becky’s question about ‘how is Stephanie doing’ to Triple H. His promo on Becky afterwards was awesome. Triple H basically told Becky that she was a facade and her knee might not even be hurt. She just doesn’t want to face Ronda and is scared. So you want to get suspended to have a reason then Becky slapped him. It takes you by surprise.

-Taz thinks WWE is doing perfect with Becky. She has to get that title from Ronda at WrestleMania because Ronda isn’t getting over at all. She can beat up people all day, but she doesn’t have the fans, according to Taz. It takes years to build up your instincts with the fans, not just one year. Taz thinks Triple H’s promo was awesome.

The first part are comments and thoughts on Dean Ambrose that Taz has made the past two episodes. It is basically the same thing over and over then he takes a break. Everything after that was new and pretty good. I wanted to rate this higher because of his thoughts about Becky and Ronda, but because of the first part being repeated I couldn’t.

PODCAST RECAP AND REVIEW: Sam Roberts Wrestling Podcast with Nick Aldis and Austin Idol on the resurgence of the NWA, working with Billy Corgan, why Nick left Impact and feels he shouldn’t have done the last set of tapings, The Rock at WrestleMania? (Ep. 179) 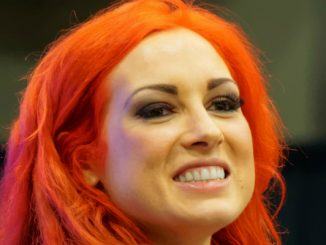 QUICK QUOTES: Becky Lynch on getting back into wrestling after retiring, her Steampunk look, someday turning heel