– Shane was initially brought in to TNA just to be an agent, but he likes the role he has now as Trevor Lee’s mentor. He thinks the influx of new talent is key and Trevor Lee is just the first step in the process. Seeing him and Tigre Uno wrestle together has been good.

– Pat brings up the Vince McMahon-Titus O’Neil incident. Shane thinks that the punishment is a little unwarranted, but that being said, it is Vince McMahon and you are on air. It probably wasn’t the best idea on Titus’s part. There’s a massive difference from doing something backstage to being in front of an audience. Titus is a really nice guy, but you shouldn’t lay your hands on the boss. He could see Vince’s train of thought. Hopefully Vince will cool off (or maybe it’s an angle).

– Shane’s pretty sure you’ll see him back in the ring at some point. He’s still trying to get his leg back up to even strength with his other leg. He’s taking his time with it. Concussions have been an issue too, but he’s taking things slow. He doesn’t want to be out there if he can’t go full force. When he’s ready you’ll see him out there.

– Shane doesn’t pattern himself after any particular agent from his past, but rather tries to not do the things he didn’t like that some agents did. Agents can make things very difficult so he tries not to be. The best agent he’s ever dealt with was Pat Patterson. He was extremely encouraging and enthusiastic. Even when they were discussing something negative, he’d be positive about it. Shane’s got a good eye for detail and he tries to encourage and deliver it in a way that’s easy for the talent to digest. Pat was always great to work with.

– Most common in-match mistake that he notices with young wrestlers? People trying to get in all of their signature moves is #1, but bridging the gap of connection between themselves and the audience can be the toughest part. It’s hard to connect when you have a couple minutes, but he likes how TNA has transitioned to longer matches since they’ve been on Pop TV. Giving the guys a solid ten minutes would help the talent showcase themselves.

– Has Hurricane ever gotten to experience a moment with the audience like Daniel Bryan did on Monday? There were a couple times – he doesn’t think many have gotten to the way Bryan did. When he came back from his spinal fusion in 2008, that was a pretty emotional moment for him. Wrestling fans at their core are great people. He remembers walking to the ring in Detroit during WrestleMania and telling Chavo to just take their time and enjoy the moment. You get more experiences like that doing house shows.

– Does Hurricane see another fan rebellion like when they hijacked that Seattle Raw with Daniel Bryan? Sure, but the fans did that out of love for him. He could totally see it happen again.

– What else would Shane like to do in further developing talent in TNA? Shane says there is a misconception between him working creative and him working as an agent. He doesn’t do creative. When you create a character, you have to do something different. This brings it back to him with Patterson, who always said do something different at house shows, Only downside with TNA currently is they don’t have a lot of live events going on that gives him the talent time to experiment. Once you find what works however, that’s when things become beautiful.

– Is creating characters that fans care about something that Shane wants to be apart of? This is something he’d certainly encourage with TNA. All creative wants that, even if that is not always the case. There is a lot of really talented wrestlers out there, but you have to connect with the audience. It isn’t about the character, it’s about the person creating the character. And a character doesn’t have to be a gimmick, it can be a character can be Daniel Bryan.

– What does Hurricane hope that comic books get back to to make them interesting again? Shane hated the DC’s “New 52” reboot. He didn’t like how all the books he bought don’t matter anymore. He understands the concept of the books matching the movie universe, but it should be the other way around. You really miss a big piece of the magic when you start with a clean slate

– Hurricane thinks that the quality of the wrestling on the indy scene is a lot better nowadays, but it’s the personalities that needs work. It seems like indy guys are taking things a lot more seriously now.

– He could see Reby Sky wrestle down the road, but it really doesn’t fit her situation currently or anytime soon.

– Has Shane ever seen a seizure involving any wrestlers backstage? Not that he recalls.

– Shane thought the Vertabreaker was a dangerous move, but he always believed he could do it safely. Pat notes that no one ever got hurt. As far as his favorite finishers today goes, he likes Trevor Lee’s fisherman buster, Eric Young’s piledriver and Orton’s RKO. Favorite finisher of all time was either Austin’s Stunner or Savage’s elbow drop.

– Who would Shane book in the main event of Bound For Glory? Matt and EC3 seems like the obvious choice, but he could see Drew Galloway holding the belt – same with Lashley, Roode and Storm. What makes it exciting is that they have a bunch of guys who could make a title run at any point.

– Shane didn’t have to really control his accent during the Hurricane gimmick since he was being a goofy character, but he did try to flatten the twang out during his heel run as Gregory Helms. He was just watching an old WCW segment when he had braces and he sounded like a jackass. You don’t have to just bury it though, look at Steve Austin. If you look at a show like Justified, Walton Goggins’ Boyd Crowder was a very intelligent character with a southern accent. Pat doesn’t think AJ’s accent will hurt him because they never give him a chance to speak. Shane thinks they could give him promo experience at house shows, but he doesn’t see why the accent should hold him back now. If they don’t want him to talk, then don’t. AJ’s big highlights are his in-ring abilities any way.

– Seeing how many athletes are suffering with injuries in their older age, will this change the trajectory of contact sports? Shane thinks that things have always been that way – we just see former stars in the media spotlight a lot more in today’s age.

8.0: If you don’t watch the new TNA product yet, then this may give you the motivation to. In addition to Shane’s experience and personality, him being a featured player in today’s TNA product made the Hurricane a great guest for this week. He was able to delve into his work as a road agent and also touched on current event subjects, most of which weren’t even TNA-centric. This episode covers a variety of topics, and if you’re a fan of The Hurricane, you’ll be a fan of this episode. Plus, a guest always gets a virtual fist bump for referencing FX’s “Justified.” 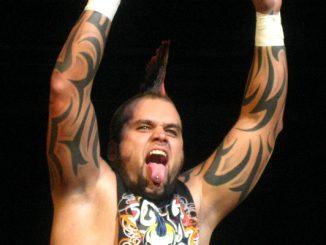 QUICK QUOTES: Jesse Neal talks being trained by the Dudleys, the wrestler who caused him to not feel half his face for four days