Road Warrior Animal recently sat down with The Hannibal TV for an interview. In their latest clip, he talks about his time with Hawk in Japan and if they got along with Bruiser Brody.

Why he and Hawk never fought Hansen and Brody:

“You know, I think that the timing wasn’t in the cards. There was an issue when we first went to Japan. Brody had a problem with us, because he knew we were going to get over huge in Japan, just with the Japanese love of the silver and black and the painted face, and just our attitude. And Brody was the only guy over there with that kind of attitude, and he didn’t like it very much, so Brody kind of stayed away. We were friends with Brody, but he just kind of stayed away. Now, we wrestled Stan and Harley Race, and had a beatdown in Cleveland, Ohio, with a Chicago Street Fight. It was brutal. All of us were bleeding. Stan Hansen was blind as a bat, right? He would kill everyone with that stupid cowbell of his. Bam! He’d slice you open. It was pretty bad.”

“Jumbo Tsuruta in Japan would always screw up Hawk’s high-spots. Everything I did with Jumbo, he was smooth as silk. Every time he got in the ring with Hawk, he’d screw it up. Well after about a two-month tour, Hawk’s pissed off. Jumbo screwed up every night for two months in Japan. And tradition in Japan, you’ve gotta really be respectful. You don’t kick doors, you don’t break glass against the wall—not Road Warrior Hawk. Hawk comes out of the ring one time and kicks that door open into their locker room, their glass shatters, he goes ‘Come here you noodle sucking son of a B.’ He goes ‘I know you understand English, you better quit screwing up our high-spots or we’re really going to have issues!’ Tsuruta was 6-foot-8, 300 lbs, and Hawk’s yelling at him saying ‘Hey I can hit a lot harder crawling up than I can down’, you know, to two big, tall guys. Jumbo’s eyes were up, and since then they never had an issue.”

Brody revealing a third “member” of the Road Warriors:

“We go back to the American locker room, and there’s Brody by himself. What does Brody do to break the ice? He finds our face paint. Well, he puts face paint on his penis and says ‘Hey look, I got the third Road Warrior!’ That broke the ice, the whole locker room cracked up and from then on we were good buddies with Brody.”

Animal also revealed that out of respect to Brody, he and Hawk never returned to Puerto Rico after his murder.

To check out the interview in its entirety, click here.

WRITTEN PODCAST RECAP: Steve Austin Unleashed! on his favorite Stunner, if Roman Reigns should turn heel, what talent relations should look for in a wrestler

QUICK QUOTES: Road Warrior Animal talks who would win in a shoot fight against The Steiners, pantsing a wrestling legend 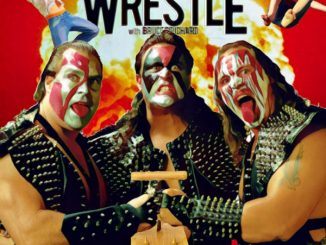 WRITTEN PODCAST RECAP: Something to Wrestle With on Demolition – the rise and fall of the legendary group, why Ax was replaced by Crush, the revelation of where “Doot Doot Doot” comes from, where do they rank on Bruce’s all-time WWE tag teams? (Ep. 55)