Pete Dunne was recently interviewed by the Card Subject to Change podcast. He talked about his TakeOver match with Tyler Bate, who influenced him, and more. Here are the highlights they sent along:

On his United Kingdom Championship match at NXT TakeOver: Chicago:

“It was unbelievable really. When we were in there we didn’t realize what we’d just done. We felt like it went well but it was only afterwards when they rushed me straight off to the media and I was on the phone to ESPN, and it was only just starting to resonate with me how well it went.”

On who influenced his style:

When I first got into wrestling I was into independent wrestling. I was into A.J. Styles, all those kind of people. And I wanted to wrestle like them and spent years trying to do that. And then people said to me you need to be more British, so I looked into Regal’s stuff, Fit Finlay. There’s definitely parts of both of those styles; there’s the athletic stuff and then there’s the British stuff.”

On working with William Regal:

“It’s brilliant. I have him to thank for getting me here in the first place…I kept getting missed calls from a number that I didn’t recognize…and the third time I realized it said Stamford, Connecticut…So I answer and it was Regal, completely out of the blue and he said he was in England, and wanted to come and watch me wrestle on that show in Mansfield. So instantly, my motivation went through the roof. So I met him there, he watched my match and he really liked it. He set me up a tryout in November…And here we are now.”

On a dream opponent:

“The big one for me is Brock Lesnar. I like that you believe in him, because that is him. I try to carry myself that way and I look to someday reach that level. I think it would be a match people wouldn’t expect but it’s one I’d love to have. It’d be a good fight.”

For the full interview, check out the Card Subject to Change podcast.

WRITTEN PODCAST RECAP: Bischoff on Wrestling – ranting on the Battleground flag match, the TV show Eric almost hosted, what one thing would he change about WWE if he was in charge? (Ep. 53) 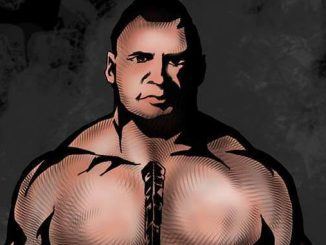