-NJPW’s G1 events over the weekend

Rich Bocchini and MSL are back, as Court is still working around the clock on a new project that has yet to be announced. Rich’s show with J.J. Dillon have received some great reviews already on iTunes. They will be talking about Jim Barnett this coming episode. There are definitely enough stories for this to be a multi-part episode.
MLW released a mini documentary on Kevin Sullivan, who allowed MLW’s cameras on to his island and into his home to talk about his career and see some of his photographs on camera. J.J. Dillon and Kevin are very close and speak a few times a week, as per Rich, who actually got to meet Kevin at an NWA Houston show a couple of years ago.

4:30 – MSL says that it’s been fun to see the crossover between WWE and WaleMania, and now Wale fans will get to see him on WWE television. Rich thinks Smackdown has been the better show, despite the past few strong weeks of Raw. Hey says there will be a different feel with Smackdown taking place on July 4th, and cool to see Wale there.

10:30 – Hogan lawsuit documentary was fascinating in Rich’s opinion. He felt that there were two different narratives throughout, and that it was much deeper than just Hulk Hogan and a sex tape and more about free speech and the press. The doc kept MSL’s interest for about an hour, but didn’t think there was enough subject matter for all 90 minutes. He’s disappointed because he didn’t think it was a great documentary overall, but he was pretty glued for the first hour or so just because of his fascination with the topic. The last third lost his attention a bit.

20:00 – Impact is now Global Force Wrestling, which is an amazing coup for Jeff Jarrett in MSL’s words. Impact is relegated to just being the name of the television program. MSL always thought the league needed a name and letters/an acronym.

28:30 – New Japan’s G1 special. Okada is still the IWGP Champion after beating Cody Rhodes Saturday night. MSL teased a few weeks ago about Billy Gunn being in the Intercontinental Title Match vs. Tanahashi, but he looked really good in a decent match.

34:00 – The Colons reportedly want their release from WWE. MSL isn’t sure what else you could do with the Colons when they’ve been enhancement guys for so long. Maybe it is better for them to go back to the island and wrestle down there, MSL suggests.

38:30 – Pacquiao loses a very controversial decision that some are calling the Australian Screwjob. Rich didn’t watch the fight but all he saw on Twitter was this is why people hate boxing. MSL didn’t think the scoring was as bad as the commentators were saying.

43:20 – Sean Mooney takes it away from the Events Center. This week on MLW includes What Happened When on Hulk Hogan’s nWo turn on Bash at the Beach ’96.

45:20 – Some interesting stuff going on at Monday’s Raw. Still a little slow in the third hour in MSL’s opinion, but he thought Enzo did very well with his promo, which would have been better if it ended after the mic drop. Rich said that Enzo’s line about Cass being a 7 foot tall catchphrase is pretty accurate, and isn’t sure what WWE can do with Enzo if he’s not paired with a guy like Big Cass, who really needs someone to talk for him. He says there’s almost an unspoken thing that Enzo doesn’t measure up to Cass in the ring, which gives a sense that he’s on the spot and would have to rise to the occasion here (this is the kind of analysis that we could use more of during this podcast instead of hitting so many topics).

Rating – 6 out of 10. This week was short on news and long on commentary that had nothing to do with wrestling (July 4th festivities, Metallica, Pacquiao), and discussions that have grown a bit stale (TNA) or are reaching (Ric Flair buying sneakers). Someone please send out an SOS for court ASAP. I admittedly skipped over a whole segment on GLOW and Hulk Hogan because it was simply redundant conversation. I can only take so much talk about why TNA sucks. We all know why. Most of us don’t care anymore.

QUICK QUOTES: Was Christian upset over being sent to TNA for one night in 2012?

RECAP AND REVIEW: The Jim Ross Report with Ric Flair on All In, wrestlers using each other’s finishing moves, the PWI 500, a chat with Kenny Omega, and the Pet Coon Goofy award 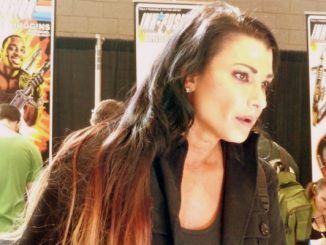 QUICK QUOTES: Victoria reveals how Chyna got her into wrestling, being asked to train Charlotte, Fit Finlay’s influence on the Women’s Division