Episode 19 with a Chat about Injuries

Christian is already in England awaiting Edge’s arrival, as they are both appearing at the London Film & Comic Con next week.

Edge brings up that he recently talked to Chris Jericho, who had told him that he would be on vacation for the next 3 weeks, yet surprisingly made his return to SmackDown. They both give Y2J trouble on his “in between” long hair, where it looks silly until it fully grows out. Christian remembers experiencing a similar issue where he had wanted to grow his out, and his wife told him that he looked “like a Bee Gee”, so he cut it. They laugh and remember the time that he made his debut in the WWE, and due to it being wet, got huge. Edge remembers having to do a double take because he couldn’t believe that was Christian.

For you fans, enjoy:  https://www.youtube.com/watch?v=Hy_uLUaOKMw

Moving on to Battleground, the boys enjoyed the A.J. Styles/Kevin Owens match, but didn’t understand the point of the referee bump, and felt that not only was the finish weird, it didn’t make any sense.

Edge’s highlight of the show was The Usos vs. The New Day. Both liked the fact that Xavier Woods was able to remind people that he can go, as he is a talented wrestler. Edge is also really enjoying The Usos as heels, and finds some similarities between them and The Samoan SWAT Team. This leads to a quick chat about how talented Samoan athletes are.

With regards to the Punjabi Prison Match, E&C felt both guys worked hard, and did as well as they could. The structure is awkward, and it makes no sound, which takes away an important piece of the match. In addition, from a production standpoint, you can barely see through it, so it’s hard to get invested. Edge gives more props to the Singhs, and feels that having the Great Khali adds more to Jinder’s storyline. His favorite part of the match was when Khali grabbed the WWE Championship from Jinder, as if he was the Champion.

Is a Hot Dog a sandwich?

Why did Christian tease us by tweeting a picture of his wrestling boots?

Christian wants to know who said it was a tease? In reality, maybe he just felt like putting them on? He was packing and saw them sitting in the closet and wondered if they still fit.

What’s the best rib that you’ve ever executed or been a part of?

One time Christian was healing from a back injury, and got a call from former WCW wrestler Lenny Lane. Lane told him that he heard that Christian had a sore back, and wished him well. He then quickly ended the call. The issue was that Christian had never met Lane, so he started investigating who gave him his number. A while later, Chris Jericho came up to him, and was curious if Captain Charisma had received any interesting calls. It turned out that Y2J was up late one night, and came across a website where you could pay celebrities to call someone. He was surprised that Lane was on there, so he felt it was worth the $20 to get Christian. Christian would get his revenge months later when him and Daivari used a phone service (posing as a hearing impaired woman) to constantly contact Jericho. The “woman” would become an obsessed fan who was constantly following Jericho. The mystery remained until Christian left in 2005, let Y2J in on the secret, and then blamed Daivari.

Unfortunately, they’re not sure if it’s coming back now, due to financial cutbacks. They wrote an entire season, and filmed some stuff, but no updates right now.

Would Christian ever write a book?

Maybe. He’s not sure if enough people would be interested, but he’s thought about it.

E&C thought it was a good time to talk about what wrestlers go through with regards to injuries, and feel that it helps legitimize what’s being done in the ring. Despite it having a worked ending, it’s not fake, there is no off-season, and it is very physical.

The first injury that Edge had was against Kurt Angle in a cage match. Close to the end, he landed on his elbow and tore his labrum. He remembered finishing the match, and then posing with Hulk Hogan afterwards. He then had it checked out, was told by the doctors that he needed surgery, but through extensive rehab, he could get back in the ring sooner. He obviously chose the rehab, but now wishes he would’ve had the surgery, as this would contribute to future shoulder injuries.

For Christian, his first injury happened deep into his career, back in 2004. During a cage match with Jericho, he took a suplex awkwardly. Through the rest of the night, he started to have issues where he couldn’t properly sit down, and then eventually could barely walk. Later that week, he had an MRI, where it was discovered that there was a slip in his L5 vertebra. He then had a long rehabbing process, and was finally able to come back.

The boys talk about how an injury doesn’t just affect the person who’s hurt, but others as well. Christian stepped into Edge’s spot and feud after his retirement, and Kevin Owens became Universal Champion earlier than expected due to Finn Balor’s injury at SummerSlam last year.

Discussion moves to how sometimes the injuries are actually good because you are able to take a break, and mentally recharge. It also gives the wrestling audience an opportunity to miss you. That being said, there is a lot of work behind the scenes to get back in the ring, as both have experienced long rehab sessions several days a week for months at a time in order to return.

Edge remembers coming back from his neck fusion surgery in 2004, and being booed upon his return, which made him immediately want to turn heel. Doing so sent his character in a completely different direction, which eventually led to further success.

Going back to how things can change, E&C bring up Mr. Kennedy’s situation in 2007. Initially, Edge was supposed to win the Money in the Bank contract at WrestleMania 23, but it shifted to Kennedy. A little while later, it was believed that Ken had torn his tricep, so the decision was made to move the briefcase over to Edge, who would then cash in on the Undertaker (who was also injured). Kennedy would soon discover that his tricep wasn’t torn, it was just deeply bruised. Unfortunately, it was too late, and the decision had already been made.

Using another “what if” scenario, E&C question what would’ve happened if Stone Cold Steve Austin had never had his neck injury, and how many more years he may have been at the top?

Christian remembers another injury that occurred on an overseas tour when he was wrestling Sheamus. During the match, he went to do a baseball slide, and his toe caught the mat, which led to him believing he had broken his ankle. Being unable to put any weight on it, Big Show carried him from the backstage area all the way back to the trainer. It was discovered it was such a bad sprain, that the doctors told him he would’ve been better if he had just broken it.

Edge reminisces about what could have been a successful run with Jericho as the tag champs, before he tore his Achilles tendon in 2009. It was another tough injury to get through, and even though he was able to make it back for the Royal Rumble in 2010, he didn’t really feel like himself until WrestleMania a few months later.

Back to “what ifs” they think about Magnum TA and how he was supposed to be the next big thing before his career was ended in a car accident. Another one was Kerry Von Erich, who even though he continued wrestling, lost his foot after a car accident.

Wrapping up the conversation, Edge would want to switch bodies with another average fit guy who’s 43, just to see what it would feel like without all those bumps, bruises, and injuries. Thankfully, he still stays active and remembers some advice that Vince McMahon once gave him, “Motion is Lotion Pal.”

E&C conclude by giving a fan some advice on being a Dad, and then close out the podcast. They wrap up the show, and encourage everyone to follow the show on Twitter @EandCPod, E-Mail them at ecpodofawesomeness@gmail.com, and to call their Voicemail at 929-367-8204.

This was an okay episode, but nothing to really write home about. It’s still good to get their feedback, but this episode had a few repeat stories (like Edge talking about his Achilles injury), and just seemed to go back and forth without much substance. Feel free to follow me on Twitter @the_Indel or send me an email at indelpw@gmail.com. See you next week!

For more, check out last week’s recap of E&C Pod of Awesomeness with A.J. Styles. 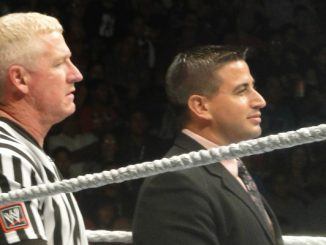 QUICK QUOTES: Justin Roberts on what it’s like to have Vince McMahon for a boss, the hardest part of being an announcer, Daniel Bryan tie incident