Shawn Michaels was a recent guest on The Rack Radio Show to promote his new film Pure Country: Pure Heart. He also talked about WWE and NXT. Here are the highlights they sent along:

What attracted Shawn to being in the movie ‘Pure Country Pure Heart’:

“I’m from Texas, so honestly any chance to wear Wranglers, boots and a cowboy hat, I’m in right away. And look, I don’t have the most experience; WWE offered me this opportunity. Last year, I did my first movie and thoroughly enjoyed it, enjoyed the process and really enjoyed just trying to lean something new especially. In this age in my life, and having the wonderful opportunities to do what I did for a living for so many years and then to be able to do a little bit more and go a little bit deeper, certainly in the acting realm. It was incredibly interesting and, I have to tell you, very intimidating to be around, in this movie; my first movie I was surrounded by some very talented actors but in this one that talented and so very gifted. Everybody could sing and I was the only person on that set that could not carry a note and it was very intimidating.”

What did he enjoy most about being on set and a part of the movie:

“Honestly, I was so very flattered to be a part of the Pure Country franchise. I thought it was just a wonderful opportunity and, again, I guess the thing I enjoyed most was we had so many opportunities and clearly many of them aren’t on camera, but to listen to those young kids sing was so moving; it was so easy, I guess, to get into character because there were many times they would be there off to the side singing and it was just breathtaking. That was the most exciting part to being in this movie; to sit there and watch all of these people… I can’t sing and I find that such a beautiful thing and when people can do that, I just like to sit there and listen to it. It was really a great deal of fun getting to do just that and, obviously, it was great getting a opportunity to be in a movie and part of the Pure Country franchise.”

Was most of the music sung on set from the movie:

“Yeah, most of them were songs that were going to be part the soundtrack and, as you know, the young lady sang quite a bit in the film and for them, I guess, it would be like going over their lines and what not, but again, I’m just blown away that people can just sit there and do that and it be so beautiful. It was just amazing to sit there and watch that. It’s a beautiful gift to see people who are naturally gifted do that. It’s pretty awe inspiring I guess you could say.”

Is he looking forward to future acting roles or is he just taking them as they come:

“Honestly, I am sort of taking it as they go. I’ve had an opportunity last year also to be a part of a comedy; it’s a spoof on The Avengers and Star Wars that I think is supposed to be coming out next year; it’s a comedy and a great deal of fun to do as well. So, as those opportunities come and as the doors open, I’m certainly going to walk through them. I understand that it’s a very difficult line of work and not a lot of people are beating down my door, but I thoroughly enjoy it and something I want to learn how to do and continue to work on it and get better at it. And certainly, if the offers are there and my schedule permits, I’ll be happy to do it. It really is a fascinating experience and a unique thing to be a part of.”

His new role with NXT and going on the road with the brand:

“I actually am, for the first time in a long time. You know, I’ve been working some at the WWE Performance Center with NXT and I hadn’t been out on the road with them and we come back and watch a lot of film and things of that nature but, in my opinion, you can only get so much from film and sometimes you have to bet there live to see it and take it all in, I believe, to help these guys out and if that is indeed my job, which I believe it is, so I wanted to go on the road and be a part of it and experience it and sort of get a feel for the vibe that is NXT. I believe it to be different for WWE or quite honestly anything else out there. The audience is different and exciting and a phenomenal brand and I just wanted to get out here and see what it was like to take it on the road. It’s a quick one which is all I can really do anymore or have the patience to do, but it’s going to be exciting and I’m looking forward to three fun nights with the NXT crew.

That is all on the NXT starts and Triple H, Matt Bloom, and Sara Amato and all the people who have put in so much time and energy into those individuals, but to me it’s the NXT Superstars; they are a young, hungry group and I agree with you that it is a different vibe. I believe it is everything pure about the wrestling business; you know, every one of them has a dream to go to the WWE and one day headline WrestleMania but this is an unbelievable fun process with them and you can feel it. To your point, when you’re out there, you can feel it and it is a palatable vibe out there and the excitement and energy that is unlike anything else out there. And I have to give all the credit to all those NXT stars out there who are the ones pulling that off, because it is their energy and their hard work that puts all those shows together and makes them as great as they are.”

Are there any current or up and coming stars that have caught his eye:

“Yeah, there are a number of them. I do my best to try and keep from, I don’t know, naming too many names and stuff like that. One, because you’re afraid you’re going to leave somebody out or put undue pressure of someone but I think there is a great deal of talent there from a number of guys and young ladies, to be perfectly honest. And that is what I think is so exciting, is there is a whole other generation that I think is going to take the wrestling business into the coming years and that is exciting to see, it really is. I guess I’m different from a lot of older guys; I think they want it to stay the same or what it was like in there day and I’m very excited about what the future has for these young men and women of NXT and the future of the WWE.”

Is there a takeaway he has gotten in working with the young new talent and what helps to set NXT apart:

“I guess the commitment and the closeness; the greatest thing I enjoy about the Performance Center and NXT is the culture, it is absolutely nothing like the wrestling business that I was in and I don’t think it’s like anything like what you call wrestling business when you get into the business aspect of it. I think that’s what I enjoy most. They are all close, they are a team and it is a very close-knit group and it is very nice to see and wonderful to be a part of. For me, someone who is coming in from the outside and from a different generation, it’s something I’m very conscious of not wanting to disrupt and only trying to be a part of if I can add to it because it is so unbelievably special and I think it needs to be protected for as long as they can. So I have to say the culture, the mood and the overall positive energy and relationship everyone ha; it’s phenomenal and very hard to find.”

For the full interview with Shawn Michaels, check out The Rack Radio Show.

PODCAST RECAP AND REVIEW: X-Pac 1,2,360 w/ Sam Roberts on how he became a WWE panelist, what it’s like being backstage, who the best wrestler in the world is, has Sam bought the new Virgil action figure? (Ep. 67) 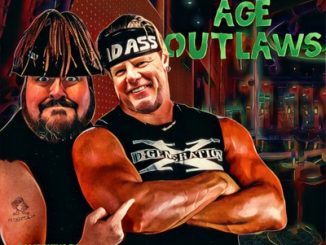