During this week’s episode of The VIP Lounge, MVP spoke at length with co-host, Alex Greenfield, of his love for Steely Dan. Following the death of musician Walter Becker, last week, the segment served as something of a eulogy for the founding member of Steely Dan.

“Most of the time when I talk to people about my love for Steely Dan, people are like ‘I’m not really familiar.’ Then I’ll hum, you know, Rikki, Don’t Lose That Number or Reelin’ In The Years or Peg or one of those songs and they be like ‘oh yeah, I know that song, yeah.’ So they’re one of those bands that you might not know them, but chances are if you’ve been on the face of the earth over the last 50 years, you’ve heard their music at some point. Even if it was just playing on the classic rock station in the background or something,

“It’s funny, like, I was one of those people for a long time. I knew Steely Dan by name, and I could tell you some of their songs, because I really like their songs, and they had a lot of songs in their (catalogue) sampled by rappers. For example, their song Peg, ‘and when you smile for the camera, I know they’re gonna love it.” Well, there’s a little riff in there, it goes (hums refrain). De La Soul, when I was in junior high or high school, maybe, came out with a song (Eye Know) and they used that sample from Steely Dan, Peg. Years later, Peter Gunz and (Lord Tariq) had that song ‘Uptown baby, uptown baby, we gets down baby, for the crown baby.’ That got a lot of radio play, it was real hot. They used the bass line from Black Cow (hums bass line). Kanye West, in his album The Graduation had the one song “Did you realize, that you are a champion in their eyes? Yes I did, so I wrapped it up and brought it back to the crib.’ So an number of rappers have used Steely Dan over the years, and Steely Dan won a Grammy because they were f**king studio musicians.

“They’re really, like, audio nerds. A lot of audiophiles will use Steely Dan music to test their high-end speakers. They actually got a Grammy award for their engineering… I’m not a musician, but talking to musicians and things I’ve read and things I’ve watched about Steely Dan, music nerds salivate over their compositions because of the structuring of their songs and their cryptic lyrics.

“They started off as a regular band in, like, ’72. Then, the (core) kind of became just Walter Becker and Donald Fagen using the best session musicians. So it got to the point where they had an idea for a song, and they didn’t just have a band, ‘hey let’s write this song.’ They’d say ‘ok, here’s a song we want to make and we’ll bring in this guy for the sax part, we’ll bring in this guy for the bass, we’ll use this guy for the drums.’ ‘Ok, what about this song? Oh, no, we’ll use a different sax player for this song, Oh, we got a different guitarist, etc.’ So, they ended up putting out just really really high quality music.

They were a touring group too, right? How did they pick those guys?

“That’s the genius. They quit touring early on in their career. They took, like, a f**king, I want to say a twenty-year hiatus. They didn’t tour at all, they didn’t tour. And then they resumed touring, They got back together, they put out their first album in, like, twenty years Two Against Nature and I think they won a Grammy for best album, and they started touring.”

Note: It won four Grammy Awards: Best Engineered Album – Non-Classical, Best Pop Vocal Album, Best Pop Performance by Duo or Group with Vocal (“Cousin Dupree“), and Album of the Year (despite competition in this category from Eminem’s The Marshall Mathers LP and Radiohead’s Kid A).

“When I was in Tokyo for the big earthquake, I had just kind of rediscovered Steely Dan and was getting back into the groove, and I downloaded Citizen Steely Dan. It was, like, a greatest hits compilation kind of thing and a bunch of other tracks. While I was trapped in my hotel room while the world was crumbling outside, I was in my hotel room with ramen noodles. Not even the good ones, the bowls I was able to get from a convenience store, cans of ice cold Asahi, cause I had stocked up on beer and Steely Dan. I was going down the rabbit hole of Steely Dan during 4/11, the major tsunami earthquake that hit Japan. That rekindled my love affair with Steely Dan. Actually, I should say it launched it, because I (already) liked Steely Dan. It was then that I fell in love with Steely Dan.

I flew to Redmond, WA to see them, just outside of Seattle, with my ex-girlfriend. It was awesome, because when they were playing Kid Charlemagne, when they got to that one part – and it’s funny because the Steely Dan crowd is an older crowd. These guys were around in the 70’s. You go to a Steely Dan concert, you see all kinds of grey and white haired people, but you do see much younger people. I tripped out, because, as we were standing there grooving to Kid Charlemagne, there was a group of young white guys in front of me, in their twenties. When that part came on from Kid Charlemagne ‘Do you realize that you are a champion in their eyes?’ These young white guys immediately kicked in the Kanye verse ‘Yes I did, so I packed it up and brought it back to the crib.’ And I thought, ‘wow, that’s so f**king cool, man.’

“I have to say, some of my personal favorite feel good music was created by Walter Becker and Donald Fagen and Walter Becker has passed away. He’s no longer with us.

I went on a date once, and I had Steely Dan playing in my car, and the young lady asked me if I would change the music to something she could relate to. I told her no, and the rest of the date, needless to say, was kind of awkward and I decided that ‘you shallow, f**king gorgeous b**ch, I’ve got nothing for you. I will drop you off at the end of the night and never call you again. I’m sure she was probably happy that I never called her again, because we can’t hang out and listen to Migos and Future, but we can hang out and listen to some f**kin’ Steely Dan. If you can’t relate to Steely Dan, you can’t relate to me.”

For the full episode, check out The VIP Lounge. 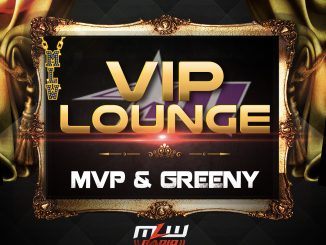 QUICK QUOTES: MVP on meeting Luke Gallows and thinking he was much older, The advice Undertaker gave him before working with Chris Benoit, the influence Kane had on his career