After weeks of anticipation, Wade brings us his interview with “Million Dollar Man” Ted DiBiase. He talks about his new movie coming out, his son’s journey in pro-wrestling, and how today’s schedule in WWE helps or hinders being a family man and how that relates to some of the things he regrets during his time with WWE.

Wade had encouraged his listeners to reach out to discuss how they go about listening to his podcasts at PodcastOne, using the hashtag #WKPWP. Seeing as how this is a recap of his Interview Friday I  encourage readers of PWPodcasts.com to engage in the conversation as well, but also mention you are a reader of PWPodcasts.com and let us know how much you enjoy the recaps.

Wade introduces Ted DiBiase and jumps right into a question about when and how he decided to make The Price of Fame. Ted says he’s been a minister for about 17 years now and takes trips to churches and speaks the gospel. He was approached by a gentleman named Pete who wanted to have a shoot interview with Ted and a friend of his.

When Pete started doing his interview, the things Ted talked about and his faith helped turn Pete’s life around, it really resonated with him and made him change a lot in his life. After a bit of time, Pete approached Ted about doing this documentary about his life. Pete’s experience up until that point was just being a photographer and videographer for weddings. Ted’s son came to him and suggested telling the story through the eyes of his father and how his family life impacted work and vice versa.

Ted found himself crying the first time watching the film, with interviews from Roddy Piper and George “The Animal” Steele, it really hit home for him. Pete took Ted to his father’s grave. Ted thought this was for the movie, however, without cameras, he shared just a moment of reflection with his father around this movie.

About The Price of Fame:

Wade brought up that although this movie has a lot of Christian and religious undertones it isn’t “preachy” or trying to convert people. Ted’s character was the exact opposite of him, just a rich bully, and everything you don’t want to be. The moral of the movie is supposed to show wrestlers and fans how this job of professional wrestling can really change yourself if you’re not careful. He admits to getting caught up in riding in limousines and going without stopping. He admits to doing things he didn’t want his wife to find out about, but she did. That made him feel like a real jerk. Today, Ted says he has something better than the millions he portrayed: the love and trust of his wife and beautiful children.

Ted’s son plays a large role in the movie. He was seemingly going to be huge in the business, but after working for years he realized it wasn’t for him. Wade asks what it was that caused him to not like the business. He learned that the business is everything Ted says, being in the ring and entertaining fans is amazing. However, everything that comes along with that is another story. The job has to be your life, you can’t have a family and life outside of wrestling. This isn’t exclusive to WWE or other companies, but in order to make enough money it has to be your life.

After leaving WWE, Ted DiBiase Jr. had a bit of an identity crisis but now has found himself. He is involved in his father’s ministry, has a son, and another on its way.

Hacksaw Jim Duggan was quoted in the movie saying “It was Drugs, Booze, and Broads, god I miss the old days,” it was kept in the movie to show the lifestyle and how wrestlers can be. Wade thought that perhaps leaving that kind of a quote in the movie might have the reverse impact he was expecting. Ted says if you think about it completely, any of those wrestlers who went on and do this full-time for an extended period of time, they aren’t here anymore. Getting in and having a taste of the business is one thing and seeing it for yourself is another.

Wade starts off the second part with how has his message changed and what gets through to people with a younger mindset. Ted says if you live off the truths of the Bible you will have a good base to life and that message has never changed. He also says it’s what the country was founded on and is what makes our country the greatest in the world.

“310 days on the road, and it was grueling,” Ted himself said in the movie about being on the road and how it impacted his life at home. Wade asks if WWE can do anything to make this more of a family friendly environment for its wrestlers. Ted does credit them for having the most stringent drug policy ever. You have to let the company know if you have any prescribed medication and for what purposes.

Ted came in after the first few WrestleManias, and they had a schedule when they were home only 6 days a month. He said the game is played this way and you have to accept that, unfortunately it’s not the company’s agenda to do anything but be accountable for shareholders. Ted goes on to say steroids were never encouraged, not necessarily they were never used, but it wasn’t harbored as a need in order to make it.

Wade believes wrestlers should be able to have set vacations and able to be off weeks at a time, if they want to. Ted agrees a schedule like that might have been helpful for him back in the day.

The reason Ted left WWF and jumped to WCW was because he was put back on the road and knew that would be a bad idea for him. He quit by simply writing a letter, which he regrets because he was approached later and was told that Vince wanted to try and work it out with Ted.

Going back to the time off situation, if a wrestler wants to have what Wade suggests, they can go talk to Vince. Wade elaborates and says it doesn’t need to be a company mandated thing, wrestlers who don’t want to take the time off don’t have to. However, if one guy or girl wants to take that time off it shouldn’t be seen as a negative and “not being a team player.” Ted says he actually was given more time off for Vince then his previous independent work, just that the drive was harder, more travel, stuff like that. It comes back to being about self responsibility and asking for something that you want. At the core of everything, Ted believes Vince is the hardest worker alive and cares tremendously about his employees and is willing to do whatever for them, within reason.

Lex Luger said in the movie “clean up your own backyard before you start talking about others, Ted.” This used to be the common thoughts about Ted DiBiase. Wade asks how it feels to now know that most people changed their minds about him. He says it feels great and gives an example of multiple wrestlers who have come to listen to him give a service and have changed their lives based off of how sincere he is and how powerful the message is.

Ted’s wife is in the movie and shows her perspective and the other side of what it’s like in professional wrestling as being on the outside looking in.

Wade asks Ted if there is a way to change the way storytelling is done in WWE. Ted says he doesn’t watch the product now and can’t comment on today. But going back on Hogan and that era, he didn’t see or understand it at first but after a while he understood. It was family friendly, real good guys and real bad guys. You cheered the good guys and booed the bad guys. He goes on to say that diversity plays a huge role in it as well, after Stone Cold got his deal and was riding off, that everyone was bald headed and tattooed. Ted believes it needs to go back to all good guys and all bad guys, not this shades of grey and having characters hover somewhere in the middle.

Wade brings up Bill Watts since he is, at the time of this interview, reading through Slobberknocker. The question is how does Bill impact Ted coming up through wrestling, what he meant to Ted and more specifically about the storytelling of heels and baby faces. Ted thinks Bill Watts is an amazing person and has also become a good Christian. Nobody had a bigger impact on Ted then Bill, he was the best and his ring psychology was top notch. His storytelling was amazing and his perspective on how to handle characters was unmatched.

Ted tells a story about how Bill took him from the most hated heel in the territory to a baby face in one night. Wade related Stone Cold’s success to pairing up with Ted at the beginning to be the spokesman for Austin. Believing that improv and feeling the moment is far more important than memorizing lines and making sure to put certain things into a promo.

Wade had advertised emailing questions in for Ted and he gets to one from Jonathan, who hated Money Inc. and wondered what Ted thought about that and if he felt there was money left on the table for a Ted World Title run. Ted agrees and says that probably would have put him over the top if he was able to have a run with the World Title on the way to the top. He goes on to say he has no complaints, he’s here and is still loved by fans. He’s surprised that even the younger audience recognizing him and he loves it.

This ended the interview with Ted. Wade closes the show out talking about his previous PodcastOne interviews with Jim Ross the last two weeks. He also made a plug for The PWTorch VIP subscription. Another mention of using the hashtag #WKPWP to talk about where you listen to the show. Feel free to also mention about reading this on PWPodcast. Wade Keller’s Podcast is in the top 5 most downloaded podcasts in the sports category. Wade reported on the important numbers from WWE’s recent quarterly report on PWTorch.com.

Good interview overall, as usual by Wade. The religious aspect of the movie doesn’t seem to be hidden in anyway as evident in the interview. This isn’t a bad thing, just an observation, that from an atheist perspective, it was still a good listen. My only complaint was either due to technical difficulties or otherwise, there was a lot of times that Wade and Ted were talking over each other and it made for odd transitions. Good coverage of all topics Wade said he would discuss, with the exception of fan emails. Not sure if it was truly due to over run time or if there just wasn’t enough popularity around the interview but I wish we had more fan question and answers.

Jason Darling is from Frederick, MD, part of the DC-Metro area. His first vivid memory of wrestling was on his 15th birthday, the triumphant return of Triple H to then WWF television. Since that day he has been a fan and hasn’t missed a Raw or Smackdown. Follow him on any social media platform with the username @Wheenus 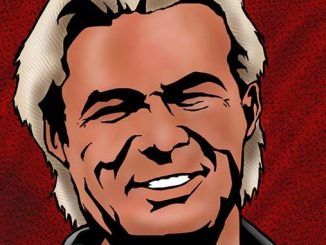 QUICK QUOTES: Eric Bischoff on why The Great Muta joined the NWO, how being a heel was initially “very hard” for Hulk Hogan