John DiGiacomo was the guest on this week’s episode of Prime Time with Sean Mooney. The actor spent three years working for the WWF in the late 80’s and early 90’s as the character Jamison. DiGiacomo offered lots of insight on his time with the company. For the sake of clarity, he will be singularly referred to below as Jamison. Here are 32 interesting items that were discussed during the interview:

2. Andy Kindler from Everyone Loves Raymond was believed to have played Jamison, to the point where the credits appeared on his IMDB page.

3. Jamison stayed in acting for 7-8 years following his WWF career, living in NYC.

4. James, Jamison’s son, is an aspiring actor who appeared in a commercial with Cam Newton.

5. Jamison worked on Wall Street for nearly a decade after college before turning to stand-up comedy.

6. The character of Jamison was developed while he worked for a murder/mystery improv group.

7. Vince McMahon discovered Jamison while at the improv show celebrating a friend’s birthday.

9. Jamison served as Merchandise Manager for UB40 in 1988, as the band rode a wave of popularity on the heels of their hit “Red, Red Wine.”

11. Jamison would break into a “dirty” version of the character with Bobby Heenan during commercial breaks.

12. Jamison greatly admired Curt Hennig, both for his athleticism as well as his sense of humor.

13. Ted Dibiase and “Sensational” Sherri were Jamison’s favorite people to work with in the WWF.

14. On occasion, Jamison would smoke marijuana with Sherri.

15. Jamison recognized Vince at the improv club that fateful night. He sought him out and said hello after the show. Two days later, he got a call from the WWF, asking him to come in to meet Bobby Heenan while in character.

16. Once Bobby realized he was playing a character, he and Jamison hit it off. Jamison was offered a contract on the spot.

17. The Bobby Heenan Show was cancelled after four episodes because USA Network hated it, in Jamison’s opinion.

18. Jamison was admonished during the taping of the first episode for mentioning that Vince McMahon was the owner of the WWF.

19. Jamison’s performances on the Bobby Heenan Show were completely improvised.

20. Sean Mooney feels that Heenan was lost in his role as host of the Bobby Heenan Show, as Jamison’s presence forced him to be the straight man.

21. Bobby was very appreciative of Jamison letting him get the last word in and setting up the jokes for him.

22. Jamison’s contract with the WWF was dependent on the existence of the Bobby Heenan Show. When the show was cancelled, he was temporarily terminated.

23. Jamison learned later that there was a division amongst the people surrounding Vince about whether the character belonged on a wrestling show. Vince was very supportive and loved the character.

24. Pat Patterson “absolutely despised” the Jamison character. He didn’t like him on a wrestling show, but beyond that, he also felt the character was insulting to homosexuals.

25. Jamison was not a huge wrestling fan and felt after a while that his job with the WWF was holding him back from pursuing an acting career.

26. Hulk Hogan was a huge supporter of Jamison, who feels that he could make Hogan laugh.

27. Jamison’s time with the WWF ended when he refused to go on a tour of Japan. He left on good terms, even receiving a severance check.

28. Many of the wrestlers respected Jamison for his willingness to take a bump and desire for the action to appear real.

29. While managing the Bushwhackers, Jamison would only work TV, never house shows.

30. Jamison feels that his three years with the WWF allowed him to transition from a struggling comedian to a working actor.

31. Jamison doesn’t like to do trade shows and autograph signings. He feels many wrestlers do them because they’re hard up for money, and so many of them are in poor physical condition. He finds it depressing.

32. Jamison was unappreciative of his time with the WWF at the time he left the company, feeling the gig held him back from doing so much more in acting. Twenty years later, he realizes the job provided him with an agent and a ton of opportunity. 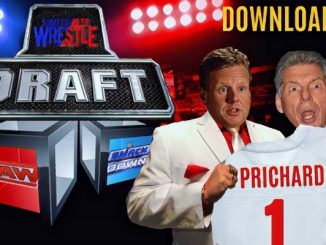 37 Interesting Moments From Something to Wrestle: The First Draft (2002) – original pay-per-view plans, alternate names pitched for “WWE,” wrestlers who tried out for commentary, who was the biggest bust?