• Usual format in which Brian Last asks Jim Cornette listener questions about current wrestling and wrestling history with great chemistry between the two.

0:00 – Jim is pleased with Brian’s intro this week: “Sooner or later a blind squirrel will find a nut.” Corny then tells some funny road stories involving The Midnights including Bobby Eaton eating a pork rind and convincing Stan Lane it was a fried rat “or whatever” and Lane throwing plastic ants at Jim in the car.

11:15 – Starting in 1982, if Fritz Von Erich, Verne Gagne and Jim Crockett could change one thing from their respective territories during the 1980s what would each change and could anything be done to stop the WWF eventually taking over? Jim: “Obviously Fritz would’ve wanted David not to die, I think we can say that without hesitation.” With Verne, it was probably deciding to not selling the company to Vince or losing Hogan. Crockett’s a bit more complicated because he did a lot of things right (especially in ‘83) but expanding the company before it was ready, to keep up with Vince, “spread everybody too thin” and was “his downfall.” Brian: “The second (private) jet is a symbol of his downfall.” Interesting, in depth discussion about the WWF expansion in the 1980s. Really good stuff including a story about Ric Flair shouting at a member of the Virginia State Athletic commission when the WWF started running big shows in the area. Jim once got a warning letter after he cussed out the same guy!

33:53 – What does Jim think about the term ‘male soap opera’? Jim: “I’m not particularly more offended by that than I am by anything else that people call it these days but it didn’t use to be a ‘male soap opera’… we actually used to have as many female fans as male fans, it’s just that we don’t now.”

36:51 – Has Jim ever had an encounter/experience with Low Ki and how much has his attitude hindered his career? Jim: “We’ve passed in the night a few times and I’m sure if we had worked together regularly I’d have had a cross word with him ‘cause he does eventually with everybody.” Jim: “He’s a well spoken, intelligent guy and he works hard… does good s*** in the ring.” Low Ki left TNA last time because they brought him in to work a program with then-champion Alberto Del Rio but when Del Rio was fired they tried to put Low Ki lower on the card, so he left after three days! Doesn’t like to “do jobs.”

41:26 – Why did Jim Herd suspend Paul Heyman while he was working in WCW? Jim’s not quite sure because it happened a few times but he does discuss one time Heyman got into trouble for working out how to get plane fare refunded to his credit card instead of WCW’s. He then talks about Heyman telling him (during the Midnight/Midnight angle) that Jack Nicholson told him to “watch the tennis racket” in New York’s China Club. He swore on his father’s life!

51:56 – What are Jim’s thoughts on a WWE executive recently losing his job because his wife’s xenophobic, anti-Muslim tweets? She’s actually a fairly prominent, well-followed alt-right twitter user and her husband was in charge of negotiating WWE TV rights deals in the Middle East etc… so, yeah. She doesn’t live with her husband and has moved to be near her friend, who’s in prison. Strange story.

55:42 – Would Sting have been a bigger star and had better matches in the WWF in the 1990s? Jim: “Yes and no. He would’ve been a bigger star if he were in the WWF in the 90s and his matches probably wouldn’t have been as good because they were still placing more of an importance on in-ring in WCW even when they weren’t doing any business… he was working with Flair and he was working with Vader… (Rick) Rude!” Corny doesn’t think that Sting could’ve “hung” with the WWF attitude-era talent – “I don’t think he cared anymore.”

58:27 – How was Sting to work with in TNA?
Jim: “He did a great job because by that point he wasn’t committed to the wrestling business… he was staying because Dixie was throwing stupid money at him… Since he was taking that money he over-performed for a guy that age and risked his neck and had possibly better matches and maybe better promos than a lot of ‘em that he’d had ten years earlier.” Jim asked him if ever wanted to turn heel and he simply said “no.”

1:01:41 – What would’ve happened if SMW had stayed in business until the start of the boom period in the mid-to-late 1990s? Jim: “We would’ve had a nice little four year run where we probably all made some money until after 2001 probably everything would’ve fallen to s***… but by then I may not have been still alive.” Jim moving to Stamford to work for Vince during that time would’ve obviously been affected but the agreement between WWF and SMW and the fact that SMW was too small a company to be on Vince’s radar as major competition would’ve eased any tension in their relationship.

1:05:32 – What happens to the WWE HOF busts, since there’s no physical hall? Jim: “They probably store… the busts… back at the warehouse, with the archivist, between hall of fame ceremonies each year.” Jim thinks that a WWF hall of fame should be in Madison Square Garden but due to the territory system the significance of various wrestling figures differs throughout the country, so a stationary, physical wrestling hall of fame wouldn’t be in an ideal location wherever it was.

1:08:54 – Why is there not more SMW on the WWE Network? Jim: “Because it’s not a priority” and there’s still classic Florida and Mid-South footage yet to upload weave just got to be patient, I guess.

1:10:44 – Does Jim have any Gangrel stories? Corny’s known him since he was a fan in Florida in the 1980s. He used to hang around with Jeff Bowdren. The fangs were real, he had them put in there! Jim was very high on The Brood, particularly Edge and that led to a confrontation between him and Kevin Dunn when Jim compared The Brood to The Fabulous Freebirds and Dunn didn’t like it! Jim does a funny Kevin Dunn/Bugs Bunny impersonation! Jim: “But The Brood were great and I always liked Gangrel.”

1:14:16 – Who comes to Jim’s mind as the most intelligent wrestlers he’s ever worked with? The emailer mentions Glen Jacobs, Mick Foley, Nick Bockwinkel, and Raven and Corny agrees. Raven’s I.Q. was “Mensa level” and Bockwinkel was very well-read. Jim also suggests Eddie Graham, Danny Davis (OVW), and Necro Butcher. Jim: “book learning is not the only source of intelligence and a lot of the time, in the wrestling business, you can’t tell.” Brian suggests Triple H! Brian: “He had a game plan of conquering and it all worked out.” 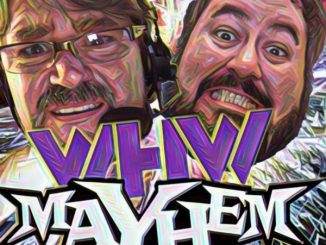